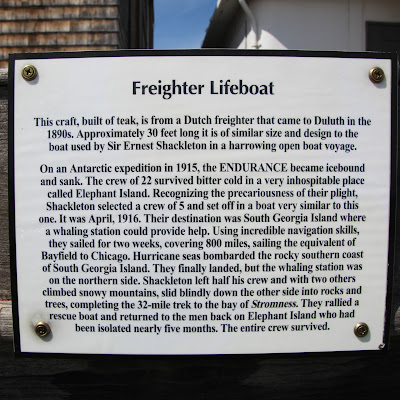 This craft, built of teak, is from a Dutch freighter that came to Duluth in the 1980s. Approximately 30 feet long it is of similar size and design to the boat used by Sir Ernest Shackleton in a harrowing open boat voyage.

On an Antarctic expedition in 1915, the ENDURANCE became icebound and sank. The crew of 22 survived bitter cold in a very inhospitable place called Elephant Island. Recognizing the precariousness of their plight, Shackleton selected a crew of 5 and set off in a boat very similar to this one. It was April, 1916. Their destination was South Georgia Island where a haling station could provide help. Using incredible navigation skills, they sailed for two weeks, covering 800 miles, sailing the equivalent of Bayfield to Chicago. Hurricane seas bombarded the rocky southern coast of South Georgia Island. They finally landed, but the whaling station was on the northern side. Sheckleton left half his crew and with two others climbed snowy mountains, slid blindly down the other side into rocks and trees, completing the 32-mile trek to the bay of Stromness. They rallied a rescue boat and returned to the men back on Elephant Island who had been isolated nearly five months. The entire crew survived.

The marker is located on the grounds of the Bayfield Maritime Museum located at 131 South 1st Street, Bayfield, Wisconsin 54814. 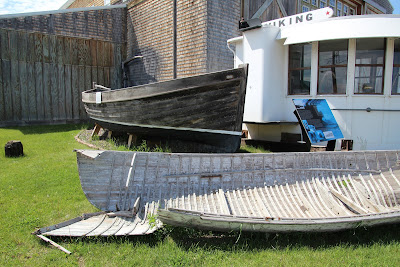 The small marker is affixed to the side of the brown boat. 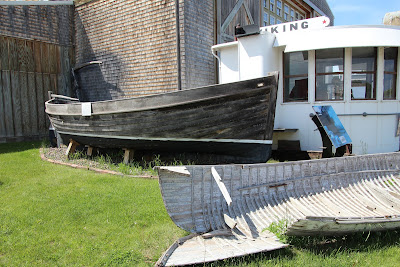 The marker is located in Bayfield, Wisconsin.