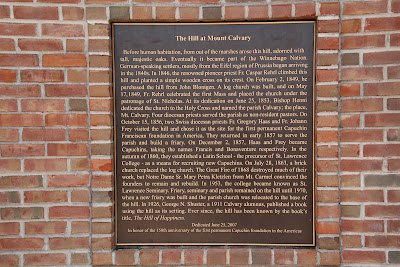 Before human habitation, from out of the marshes arose this hill, adorned with tall, majestic oaks. Evenutally [sic] it became part of the Winnegabo Nation. German-speaking settlers, mostly from the Eifel region of Prussia [sic] began arriving in the 1840s. In 1846, the renowned pioneer priest Fr. Caspar Rehrl climbed this hill and planted a simple wooden cross on its crest. On February 2, 1849, he purchased the hill from John Blonigen. A log church was built and [sic] on May 17, 1849, Fr. Rehrl celebrated the first Mass and placed the church under the patronage of St. Nicholas.

At its dedication on June 25, 1853, Bishop Henni dedicated the church to the Holy Cross and named the parish Calvary; [sic] the place, Mt. Calvary. Four diocesan priests served the parish as non-resident pastors.

On October 15, 1856, two Swiss diocesan priests [sic] Fr. Gregory Haas and Fr. Johann Frey [sic] visited the hill and chose it as the site for the first permanent Capuchin Franciscan foundation in America. They returned in early 1857 to serve the parish and build a friary. On December 2, 1857, Haas and Frey became Capuchins, taking the names Francis and Bonaventure [sic] respectively.

In the autumn of 1860, they established a Latin School -- the precursor of St. Lawrence Collage -- as a means for recruiting new Capuchins. On July 28, 1863, a brick church replaced the log church. The Great Fire of 1868 destroyed much of their work, but Notre Dame Sr. Mary Petra Kletzlen from Mt. Carmel convinced the founders to remain and rebuild.

In 1953, the college became known as St. Lawrence Seminary. Friary, seminary and parish remained on the hill until 1970, when a new friary was built and the parish church was relocated to the base of the hill.

In 1926, George N. Shuster, a 1911 Calvary alumnus, published a book using the hill as its setting. Ever since, the hill has been known by the book's title, The Hill of Happiness.

Dedicated June 25, 2007
In honor of the 150th anniversary of the first permanent Capuchin foundation in the Americas.

[paragraphs added for ease in reading]

The marker is located across from the Capuchin Cemetery at St. Lawrence Seminary High School, and is accessible from eastbound Church Street, west of its intersection with Fond du Lac Street, at or near 301 Church Street, Mt. Calvary, Wisconsin 53057. 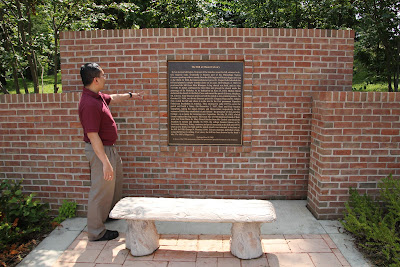 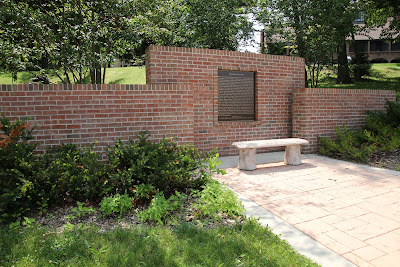 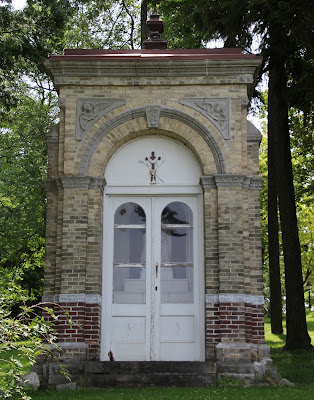 Nearby chapel that is no longer in use. 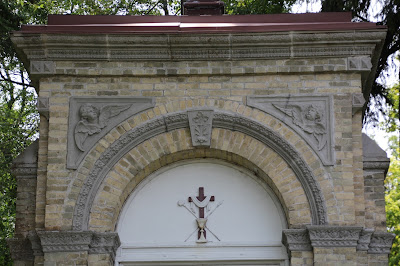 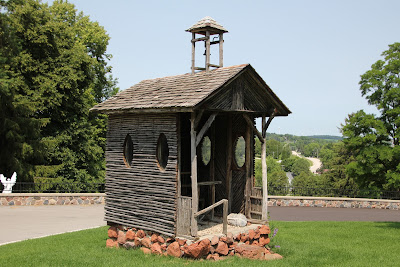 Nearby display -- looking northwest from the hill. 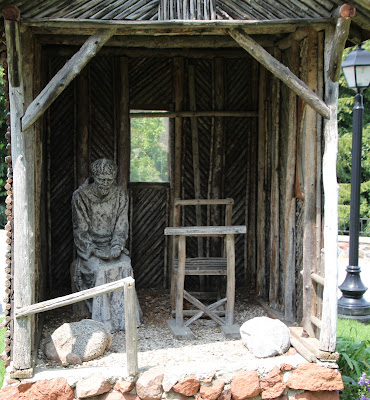 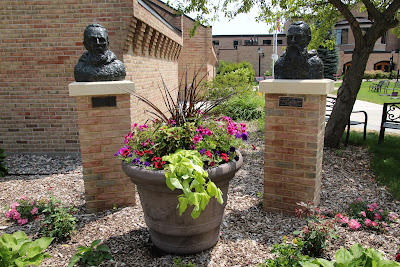 The co-founders, Fr. Bonaventure Frey (on the left) and
Fr. Francis Haas (on the right). 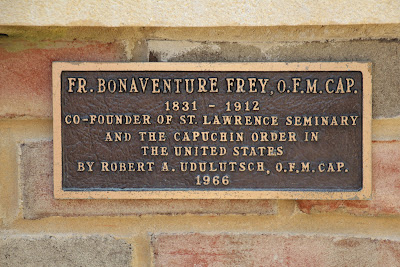 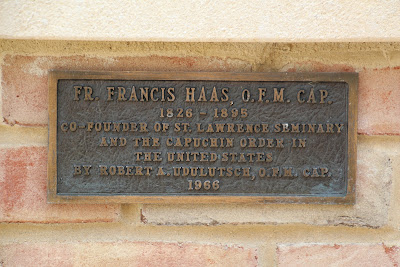 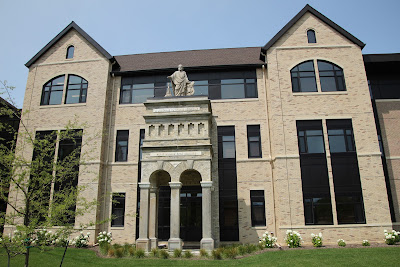 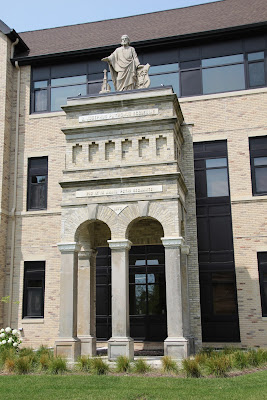 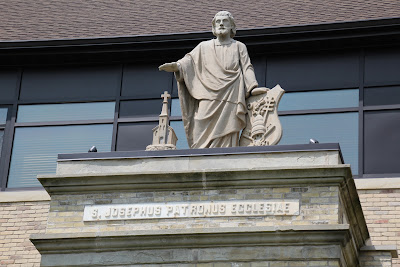 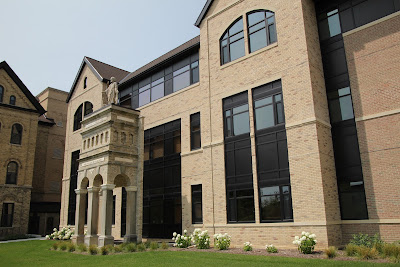 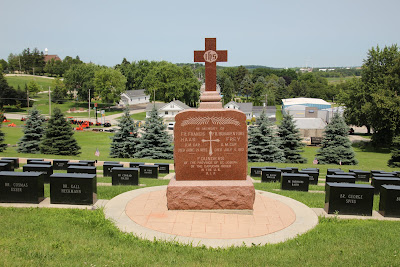 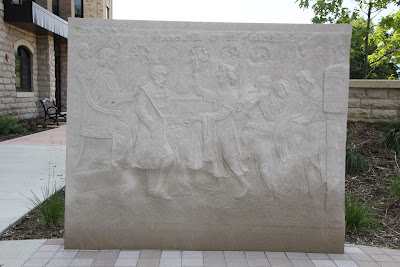 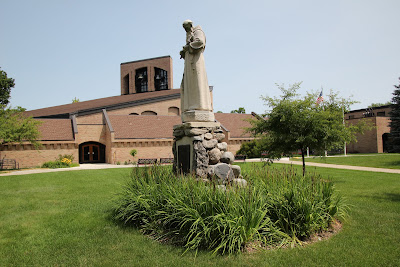 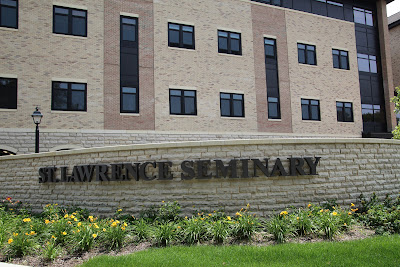 The marker is located at St. Lawrence Seminary. 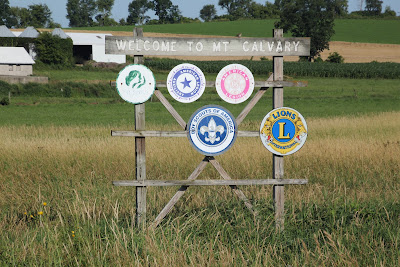 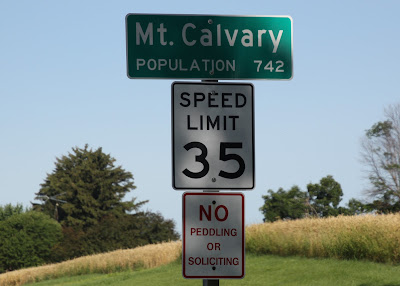 The marker is located in Mt. Calvary, Wisconsin.