Welcome to the Edgewood Park and Pleasure Drive 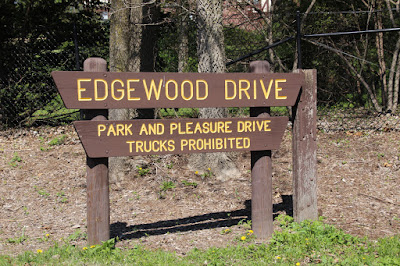 A marker at this location, erected by Edgewood College in 2007, is missing.
The marker read:

The Madison Park and Pleasure Drive Association, incorporated in 1894, was granted an easement from the Dominican sisters of Sinsinawa for a road connecting Vilas Park with Woodrow Street.

The road was constructed in 1904 to provide a place to enjoy nature by bicycle, horse-and-carriage, or on foot. The advent of the automobile gradually eroded this peaceful oasis, and by the 1990's it had become a hazardous commuter shortcut.

In 2007, the Friends of the Park and Pleasure Drive Committee successfully spearheaded an effort to convince the city of Madison Parks Commission to close it to drive-through automobile traffic. This restored the road to its original intent.