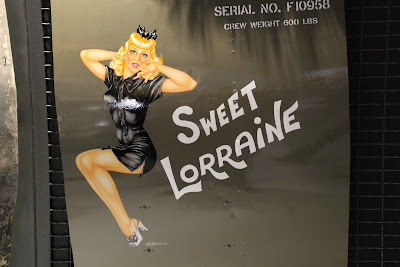 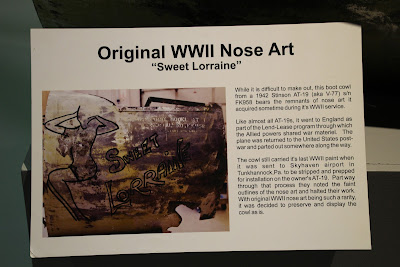 While it is difficult to make out, this boot cowl from a 1942 Stinson AT-18 (aka V-77) s/n FK958 bears the remnants of nose art it acquired sometime during it's [sic] WWII service.

Like almost all AT-19s, it went to England as part of the Lend-Lease program through which the Allied powers shared war material. The plan was returned to the United States post-war and parted out somewhere along the way.

The cowl still carried it's [sic] last WWII paint when it was sent to Skyhaven airport in Tunkhannock, Pa. to be stripped and prepped for installation on the owner's AT-19. Part way through that process they noted the faint outlines of the nose art and halted their work. With original WWII nose art being such a rarity, it was decided to preserve and display the cowl as is. 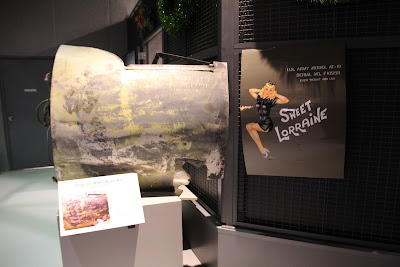 Sweet Lorraine is part of the Commemorative Air Force
WWII Nose Art Collection, on display through December 2017
at the EAA AirVenture Museum in Oshkosh, Wisconsin.