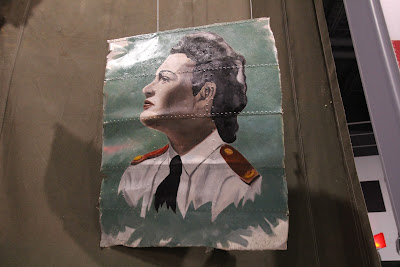 Undergoing restoration in 1999, Mystery Lady was the second piece restored by conservator Richard Trela and metallurgist David Trela. Working inch by inch, they delicately cleaned the painting. Then, in a painstakingly slow process, conservators reattached each flaking paint chip.

Over the years, Mystery Lady lost paint like many of the other nose art paintings. In areas without the original paint, the conservators in-painted, or filled the void, with a slightly different shade. In-painting helps the viewer see the artist's intent while preserving the original work. In a final step, conservators applied a protective coating to prevent future oxidation of the paint and the nose section.

Affectionately named Mystery Lady by Airpower Museum staff, this untitled portrait is one of the more artistically well-executed pieces in the collection.

Based on her uniform, several theories seek to explain her identity. One theory says it is Jacqueline Cochran, the founder of the Women Airforce Service Pilots (WASPs). A second says it portrays General Spaatz's daughter Katherine, who joined the Red Cross in England. A third theory suggests she was a Russian pilot. None of the theories can be fully supported, suggesting that her mystery artist may have taken creative license.

Mystery Lady is part of the part of the Commemorative Air Force WWII Nose Art Collection, on display November 2015 through December 2017, at the EAA AirVenture Museum located at 3000 Poberezny Road, Oshkosh, Wisconsin 54902. 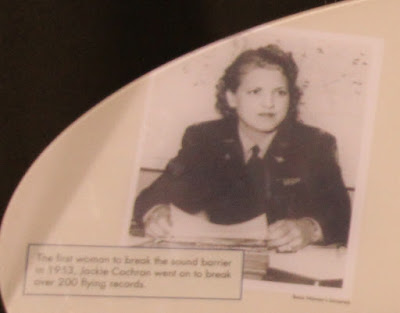 The first woman to break the sound barrier
in 1953, Jackie Cochran went on to break
over 200 flying records. 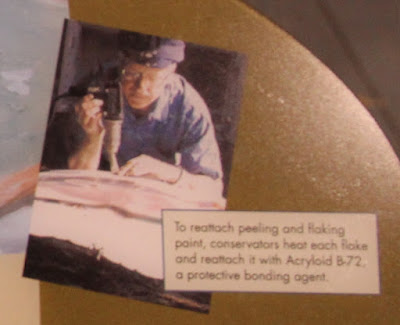 To reattach peeling and flaking
paint, conservators heat each flake
and reattach it with Acryloid B-72,
a protective bonding agent.

Mystery Lady is part of the Commemorative Air Force
WWII Nose Art Collection, on display during 2016
at the EAA AirVenture Museum in Oshkosh, Wisconsin.