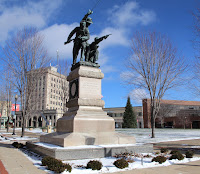 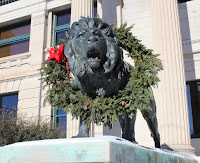 Bronze statue of Carl Schurz by Karl Theodore Francis Bitter, 1914
Located next to Lake Winnebago
at the end of Washington Avenue, Oshkosh.

Bronze dragons. Unknown sculptor. Purchased by John Hicks in Hong Kong, March 1911. Believed to be 400-500 years old at that time. Located in the Carthage Building in 1919. Formerly in the Oshkosh Northwestern building. Donated to Oshkosh Public Library in 1998 as part of the Hicks collection.