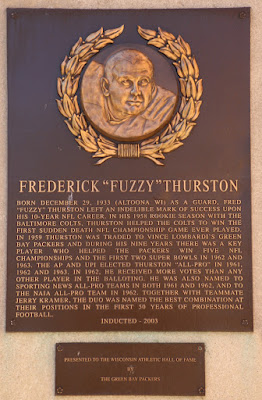 Born December 29, 1933 (Altoona, WI) as a guard, Fred "Fuzzy" Thurston left an indelible mark of success upon his 10-year NFL career. In his 1958 rookie season with the Baltimore Colts, Thurston helped the Colts to win the first sudden death NFL Championship Game ever played. In 1959 Thurston was traded to Vince Lombardi's Green Bay Packers and during his nine years there was a key player who helped the Packers win five NFL Championships and the first two Super Bowls in 1962 and 1963. The AP and UPI elected Thurston "All-Pro" in 1961, 1962 and 1963. In 1962, he received more votes than any other player in the balloting. He was also named to Sporting News All-Pro Teams in both 1961 and 1962, and to the NAIA All-Pro Team in 1962. Together with teammate Jerry Kramer, the duo was named the best combination at their positions in the first 50 years of professional football.