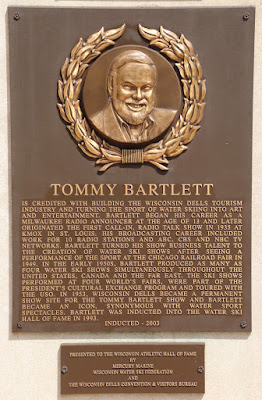 is credited with building the Wisconsin Dells tourism industry and turning the sport of water skiing into art and entertainment. Bartlett began his career as a Milwaukee radio announcer at the age of 13 and later originated the first call-in radio talk show in 1935 at KMOX in St. Louis. His broadcasting career included work for 10 radio stations and ABC, CBS and NBC TV networks. Bartlett turned his show business talent to the creation of water ski shows after seeing a performance of the sport at the Chicago Railroad Fait in 1949. In the early 1950s, Bartlett produced as many as four water ski shows simultaneously throughout the United States, Canada and the Far East. The ski shows performed at four world's fairs, were part of the President's Cultural Exchange Program and toured with the USO. In 1953, Wisconsin Dells became a permanent show site for the Tommy Bartlett Show and Bartlett became an icon. Synonymous with water sport spectacles, Bartlett was inducted into the Water Ski Hall of Fame in 1993.