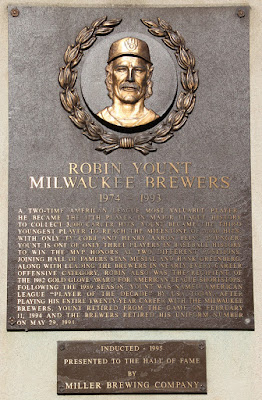 A two-time American League Most Valuable Player, he became the 17th player in Major League history to collect 3,000 career hits. Yount became the third youngest player to reach the milestone of 3,000 hits, with only Ty Cobb and Henry Aaron being younger. Yount is only one of three players in baseball history to win the MVP honors at two different positions, joining Hall of Famers Stan Musial and Hank Greenberg. Along with leading the Brewers in nearly every career offensive category, Robin also was the recipient of the 1982 Gold Glove Award for American League shortstops. Following the 1989 season, Yount was named American League "Player of the Decade" by USA Today. After playing his entire twenty-year career with the Milwaukee Brewers. Yount retired from the game on February 11, 1994 and the Brewers retired his uniform number on May 29, 1994. Inducted - 1995