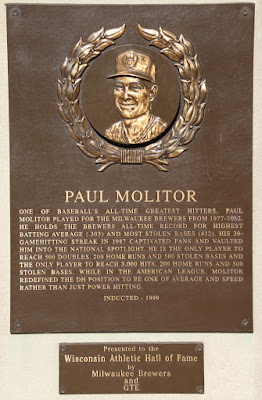 One of baseball's all-time greatest hitters, Paul Molitor played for the Milwaukee Brewers from 1977-1992. He holds the Brewers all-time record for highest batting average (.303) and most stolen bases (412). His 39-game hitting streak in 1987 captivated fans and vaulted him into the national spotlight. He is the only player to reach 500 doubles, 200 home runs and 500 stolen bases and the only player to reach 3,000 hits, 200 home runs and 500 stolen bases. While in the American League, Molitor redefined the DH position to be one of average and speed rather than just power hitting.