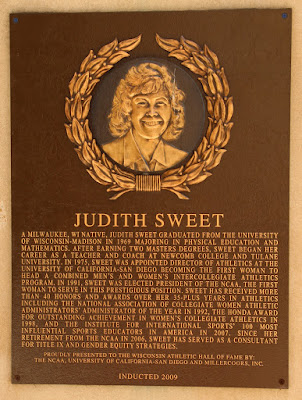 A Milwaukee, WI native, Judith Sweet graduated from the University of Wisconsin-Madison in 1969 majoring in physical education and mathematics. After earning two masters degrees, Sweet began her career as a teacher and coach at Newcomb College and Tulane University. In 1975, Sweet was appointed Director of Athletics at the University of California-San Diego becoming the first woman to head a combined men's and women's intercollegiate athletics program. In 1991, Sweet was elected President of the NCAA, the first woman to serve in this prestigious position. Sweet has received more than 40 honors and awards over her 35-plus years in athletics including the National Association of Collegiate Women Athletic Administrators' Administrator of the Year in 1992, the Honda Award for Outstanding Achievement in Women's Collegiate Athletics in 1998, and the Institute for International Sports' 100 Most Influential Sports Educators in America in 2007. Since her retirement from the NCAA in 2006, Sweet has served as a consultant for title IX and gender equity strategies. Inducted - 2009