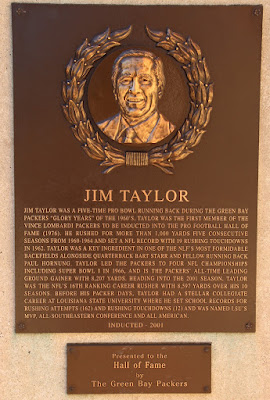 Jim Taylor was a five-time Pro Bowl running back during the Green Bay Packers "Glory Years" of the 1960's. Taylor was the first member of the Vince Lombardi Packers to be inducted into the Pro Football Hall of Fame (1976). He rushed for more than 1,000 yards five consecutive seasons from 1960-1964 and set a NFL record with 19 rushing touchdowns in 1962. Taylor was a key ingredient to one of the NFL's most formidable backfields alongside quarterback Bart Starr and fellow running back Paul Hornung. Taylor led the Packers to four NFL Championships including Super Bowl I in 1966, and is the Packers' all-time leading ground gainer with 8,207 yards. Heading into the 2001 season, Taylor was the NFL's 16th ranking career rusher with 8,597 yards over his 10 seasons. Before his Packer days, Taylor had a stellar collegiate career at Louisiana State University where he set school records for rushing attempts (162) and rushing touchdowns (12) and was named LSU's MVP, All-Southeastern Conference and All American.