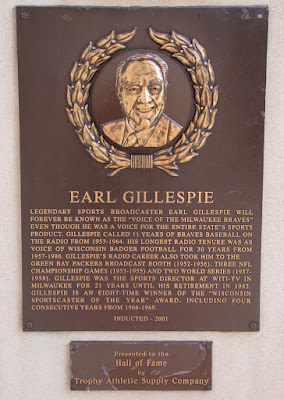 Legendary sports broadcaster Earl Gillespie will forever be known as the "Voice of the Milwaukee Braves" even though he was a voice for the entire state's sports product. Gillespie called 11 years of Braves baseball on the radio from 1953-1964. His longest radio tenure was as voice of Wisconsin Badger football for 30 years from 1957-1986. Gillespie's radio career also took him to the Green Bay Packers broadcast booth (1952-1956), three NFL Championship Games (1953-1955) and two World Series (1957-1958). Gillespie was the sports director at WITI-TV in Milwaukee for 21 years until his retirement in 1985. Gillespie is an eight-time winner of the "Wisconsin Sportscaster of the Year" Award, including four consecutive years from 1966-1969.