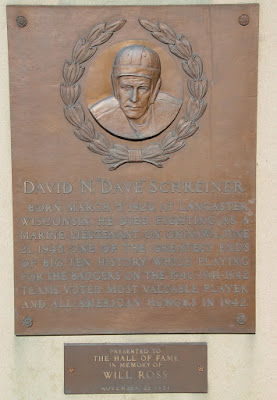 
Collegiate Athlete, Military Figure. 'Big Dave' as he was known was named to the All-Big 10 college football team in 1941 and unanimous All-American in 1942. He was co-captain of the University of Wisconsin's team in 1942 along with his lifetime friend Mark Hadley Hoskins also from Lancaster. The 1942 Wisconsin Badger football team was the third-ranked college football team in the U.S. at the time. Upon graduation Dave wanted to join the US Army Air Corps but was rejected due to being color blind. Dave then joined the U.S. Marines in 1943 and was commissioned as a 2nd Lieutenant. He fought on Saipan in 1944 where he was wounded in the head. He landed on Okinawa on the 1st of April 1945. His unit moved back into the front lines for the final assault in the region called Shuri Castle and Meat Loaf Hill. In the early hours of 21 June he died from wounds suffered while leading his unit in the capture of the final Japanese bastion of defense. He was mortally wounded while leading Company A 1/4 6th Marine Division to the summit of the ridgeline on the 20th of June. His remains were reinterred in Lancaster's Hillside Cemetary in April 1949. The University of Wisconsin later established the David Schreiner Memorial Scholarship in David's honor. David was posthoumously elected to the College Football Foundation Hall of Fame. The University of Wisconsin Athletic Department retired his jersey number '80' after his death.