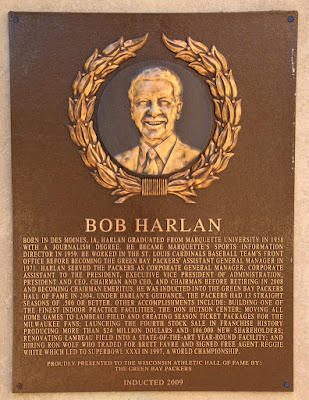 Born in Des Moines, IA, Harlan graduated from Marquette University in 1958 with a journalism degree. He became Marquette's sports information director in 1959. He worked in the St. Louis Cardinals baseball team's front office before becoming the Green Bay Packers' assistant general manager in 1971. Harlan served the Packers as corporate general manager, corporate assistant to the President, executive vice president of administration, President and CEO, Chairman and CEO, and Chairman before retiring in 2008 and becoming Chairman Emeritus. He was inducted into the Green Bay Packers Hall of Fame in 2004. Under Harlan's guidance, the Packers had 13 straight seasons of .500 or better. Other accomplishments include: building one of the finest indoor practice facilities, the Don Hutson Center; moving all home games to Lambeau Field and creating season ticket packages for the Milwaukee fans; launching the fourth stock sale in franchise history producing more than $24 million dollars and 106,000 new shareholders; renovating Lambeau Field into a state-of-the-art year-round facility; and hiring Ron Wolf who traded for Brett Favre and signed free agent Reggie White which led to Superbowl XXXI in 1997, a World Championship.