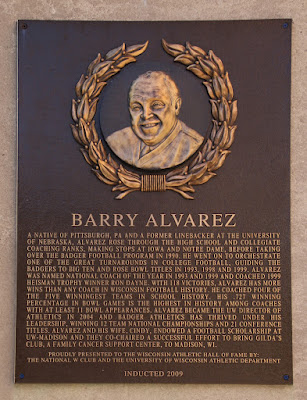 A native of Pittsburgh, PA and a former linebacker at the University of Nebraska, Alvarez rose through the high school and collegiate coaching ranks, making stops at Iowa and Notre Dame, before taking over the Badger football program in 1990. He went on to orchestrate one of the great turnarounds in college football, guiding the Badgers to Big Ten and Rose Bowl titles in 1993, 1998 and 1999. Alvarez was named National Coach of the Year in 1993 and 1999 and coached 1999 Heisman Trophy winner Ron Dayne. With 118 victories, Alvarez had more wins than any coach in Wisconsin football history. He coached four of the five winnigest teams in school history. His .727 winning percentage in bowl games is the highest in history among coaches with at least 11 bowl appearances. Alvarez became the UW director of athletics in 2004 and Badger athletics has thrived under his leadership, winning 12 team National Championships and 21 conference titles. Alvarez and his wife, Cindy, endowed a football scholarship at UW-Madison and they co-chaired a successful effort to bring Gilda's Club, a family cancer support center, to Madison, WI.