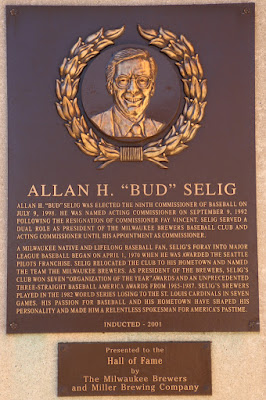 Allan H. "Bud" Selig was elected the ninth Commissioner of Baseball on July 9, 1998. He was named acting commissioner on September 9, 1992 following the resignation of Commissioner Fay Vincent. Selig served a dual role as President of the Milwaukee Brewers Baseball Club and acting commissioner until his appointment as commissioner. A Milwaukee native and lifelong baseball fan, Selig's foray into Major League Baseball began on April 1, 1970 when he was awarded the Seattle Pilots franchise. Selig relocated the club to his hometown and named the team the Milwaukee Brewers. As President of the Brewers, Selig's club won seven "Organization of the Year" awards and an unprecedented three-straight Baseball America Awards from 1985-1987. Selig's Brewers played in the 1982 World Series losing to the St. Louis Cardinals in seven games. His passion for baseball and his hometown have shaped his personality and made him a relentless spokesman for America's pastime.