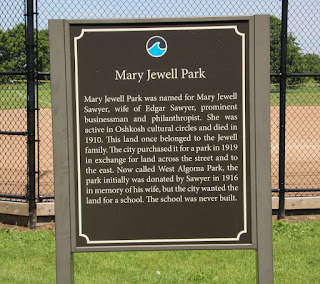 Mary Jewell Park was named for Mary Jewell Sawyer, wife of Edgar Sawyer, prominent businessman and philanthropist. She was active in Oshkosh cultural circles and died in 1910. This land once belonged to the Jewell family. The city purchased it for a park in 1919 in exchange for land across the street and to the east. Now called West Algoma Park, the park initially was donated by Sawyer in 1916 in memory of his wife, but the city wanted the land for a school. The school was never built.

The marker is located adjacent to the baseball field at Mary Jewell Park, and is accessible from southbound North Eagle Street, at its intersection with Oshkosh Avenue, at or near 1600 Oshkosh Avenue, Oshkosh, Wisconsin 54902. 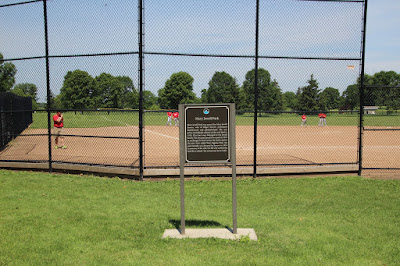 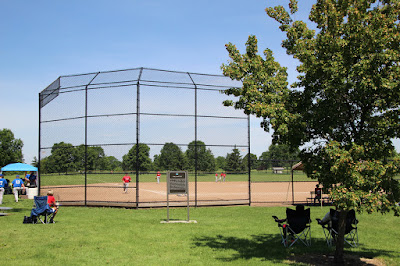 The marker is adjacent to the baseball diamond.

Mary Eleanor Jewell Sawyer was born in Canaan, New York, on July 2, 1842. She was a year old, when her parents, Henry C. and Mary Russell Jewell came to Wisconsin in 1843. The family located in Marquette County, remaining there until 1848, when they removed to Oshkosh, where Mr. Jewell established himself in business, operating a sawmill, a grist mill, and conducting a general store in that section of the city known as Algoma, called in recent years "West" Algoma. In 1864, after having completed her education at a school for young ladies in Milwaukee, the marriage of Mary E. Jewell to Edgar P. Sawyer occurred. For a time the young couple lived at Fond du Lac, subsequently coming to Oshkosh to reside permanently. Two children were born to them, Mrs. Nia Sawyer Chase and Phil H. Sawyer, both of Oshkosh, Wisconsin. Mary E. Jewell Sawyer was a woman of rare attainments and intellectual ability. Her literary talent was marked. She was gracious, courteous and sincere. At the time the era of women's clubs dawned, she was among the first to realize the importance of the movement. She was a charter member of the eLisure Hour Club, organized for the study of art in 1886. Later, she was influential in completing the organization, and was a charter member of the Twentieth Century Club, as well as its first president; she was reelected to that office after her first term had expired, and some years later was given a third term. She was also unanimously chosen and elected to the office of president of the Wisconsin State Federation of Women's Clubs. She was the founder and organizing regent of Oshkosh Chapter N. S. D.A. R., and a charter member of the Society of Colonial Dames. She was also a charter member of the Order of the Crown, which is the only Order in America recognized by Queen Alexandria of England, whose members are admitted to her court, without other credentials. The insignia of the Order of the Crown is of rare beauty. A large Greek cross of gold is pendant from a gold crown of exquisite workmanship, swung from a ribbon of pale blue and white. Her eligibility to membership in this society came to her from her great grandmother, Love Hurd, whose descent is direct from Charlemagne and King Alfred. Notwithstanding her many and varied interests, the home and family of Mary E. Jewell Sawyer always held first place. Her home was her sanctuary, and in its atmosphere the beauty and sweetness of devoted wife-hood and motherhood were manifest. Loyalty to her church, her home and her friends was a keynote of her character. The death of this revered and notable woman cut off a life in its prime. She passed away at the winter residence of the family in Augusta, Georgia, in November, 1910. In memory of her, her husband, Edgar P. Sawyer, presented to the city of Oshkosh a large tract of land in that section of the city where her girlhood was spent. The old Jewell homestead, of colonial architecture, erected by her father in the early days of Oshkosh, stands near the entrance of the Mary Jewell Sawyer Memorial park, being a part of the city property; a place of unsurpassed natural beauty, whose undulating lawns are bordered by the rippling waters of Lake Butte des Morts - a fitting memorial to the woman whose memory it was dedicated.

The foregoing content used with generous permission of Wisconsin Society Daughters of the American Revolution. 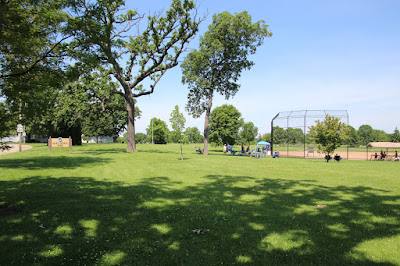 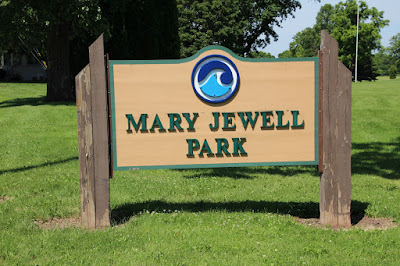 The marker is located at Mary Jewell Park in Oshkosh, Wisconsin.