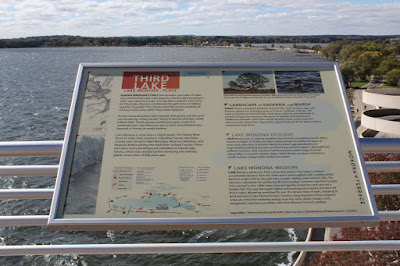 During Madison's first two decades, this body of water was named Third Lake. Lake Kegonsa, the first lake surveyed in 1834, was called First Lake. The city later created a new name for Third Lake: Monona, mistakenly thought to be an Ojibwe word for "beautiful." Ho-Chunks were the actual residents of the Four Lakes area, which they called Tejop eja.

Lake Monona is more than a simple basin. The Yahara River flows 45 miles from southern Columbia County into Dane County and connects lakes Mendota, Monona, Waubesa, and Kegonsa before joining the Rock River in Rock County. These four lakes and Lake Wingra are remnants of Glacial Lake Yahara, which was created by the retreating and melting glacier more than 10,000 years ago.

Landscape of Savanna and Marsh

Today there's a sharp line between land and lake. Until a century ago, Lake Monona spread over low-lying areas to its west, northeast, and east. This watery environment teemed with marsh grass, wild rice, and waterfowl. A savanna of large, fire-resistant oaks grew on uplands with grasses and wildflowers beneath. Prairie fires, driven by west winds, raced across the Isthmus to the Yahara River. Beyond the natural firebreak of the Yahara stood a maple-basswood forest.

Lake Monona has 13 miles of shoreline, five of which are publicly owned. With a maximum depth of 74 feet, the lake is deep enough to stratify into layers of warm and cold water in summer. Along the shore, sago pondweed and large-leafed pondweed provide waterfowl food and fish habitat. Lake health has suffered, however. Each summer mechanical plant cutters target Eurasian watermilfoil, an invasive species. Algae, which thrives on excess nutrients in runoff, reduces oxygen levels in Monona waters.

Lake Monona still fits the 1834 survey description: "the water is shallow considerable distance from the shore and is well-supplied with a variety of fish." Monona anglers fish for bluegill, bass, muskie, walleye, and northern pike. The lake has a reputation for producing 40-inch muskies. Common carp from Europe were stocked in the 1880s when new immigrants wanted to catch and eat a familiar fish. The carp damaged habitat and stocking soon ended, but they still thrive today. Migrating waterfowl fly over the Yahara chain of lakes, stopping to feed and rest in Lake Monona's bays. During a long migration, these stopover areas are critical for replacing energy reserves. Gulls, ducks, scaups, coots, mergansers, and loons are often seen from Monona Terrace's rooftop.

The marker is affixed to the lake-side railing at the West Circle of the William T. Evjue Rooftop Gardens at the Monona Terrace Community and Convention Center, at or near 1 John Nolen Drive, Madison Wisconsin 53703.

The marker is No. 3 in a series of markers erected by the Monona Terrace Community and Convention Center. 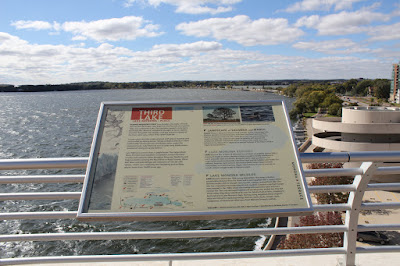 With Lake Monona visible in the distance. 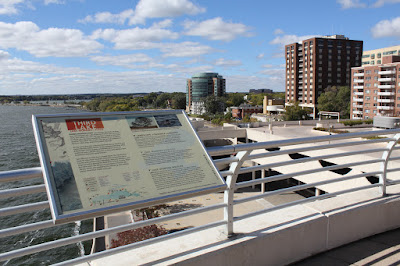 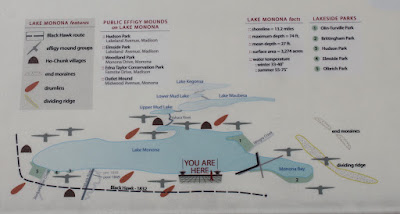 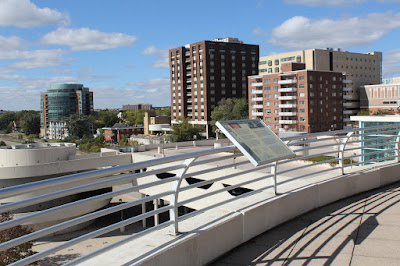 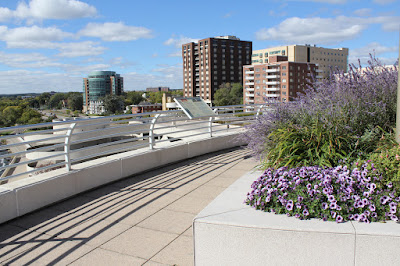 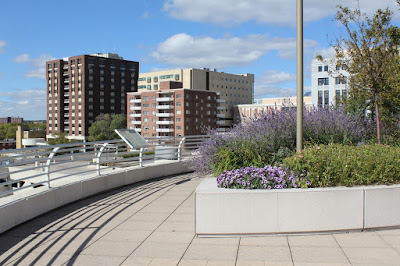 The marker is hidden behind the planter. 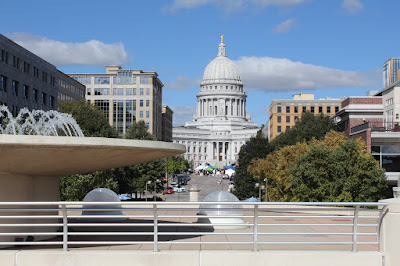 Nearby view of the Wisconsin capitol building,
located in Madison, Wisconsin.