The Gisholt Machine Company site encompasses an expansive complex and is made up of three Neoclassical Revival style brick buildings: The 1899-1901 factory, the 1911 office building, and the 1946 engineering building. The company produced manufacturing tools including heavy machinery, precision balancing, and super-finishing machines. By 1912 Gisholt was Madison's largest employer; continued growth distinguished it as the east side manufacturing district's largest company. These accomplishments made it the most influential company in Madison's early manufacturing history.


The Gisholt complex consists of three buildings representing different stages of the company's development. They feature an eclectic mix of Classical and Craftsman elements. The large factory building is the oldest section of the complex and employs the latest structural methods of its day for industrial buildings. The Gisholt Machine Company, founded in 1885 by Norwegian immigrant John A. Johnson, became a significant employer and played a crucial role in the development of Madison's east side.

The marker is No. 162 in a series markers erected by the Madison Landmarks Commission. 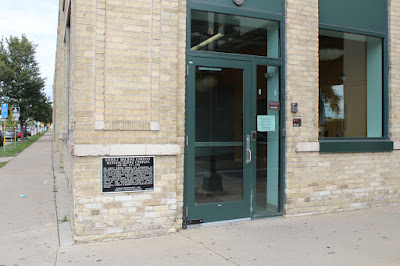