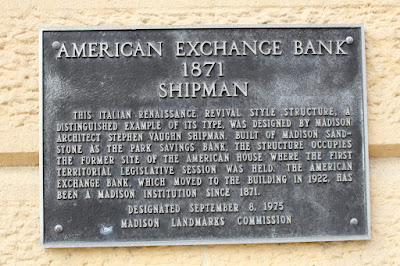 This Italian Renaissance Revival style structure, a distinguished example of its type, was designed by Madison architect Stephen Vaughn Shipman. Built of Madison sandstone as the Park Savings Bank, the structure occupies the former site of the American House where the first territorial legislative session was held. The American Exchange Bank, which moved to the building in 1922, has been a Madison institution since 1871.

"This beautiful Italianate style building was designed by Madison architect Stephen Vaughn Shipman. Erected of local sandstone, it is one of the finest Italianate commercial buildings remaining in Madison. Built as the Park Savings Bank, the structure was originally several bays wider to the left. The left-hand section of the building was destroyed by fire long ago. In 1922 the American Exchange Bank moved into the corner part of the building. During World War I the old German-American Bank, located at the time in the Suhr Building, was renamed the American Exchange Bank, no doubt to eliminate any connotation of sympathy with the enemy. The American Exchange Bank moved into this building in 1922 and remained there until recent times. The building occupies the former site of the American House hotel, a pioneer structure where the first session of the Wisconsin territorial legislature was held."

The marker is No. 36 in a series of markers erected by the Madison Landmarks Commission. 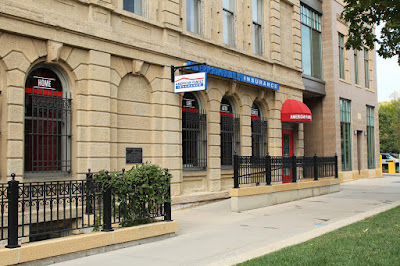 The marker is affixed to the building, visible above the green shrubbery. 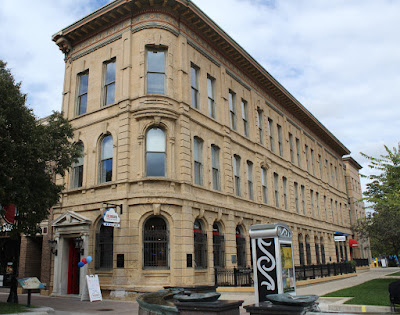 The front of the American Exchange Bank building.
The marker is visible at the far end of the building,
to the left of the red awning. 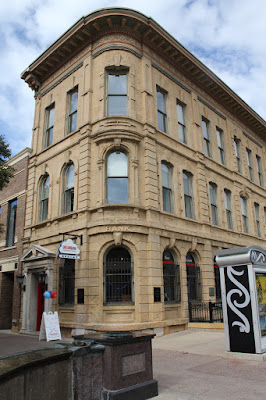 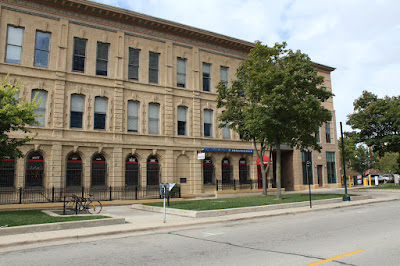 The marker is affixed to the south side of the building.
The building and marker are located in Madison, Wisconsin.