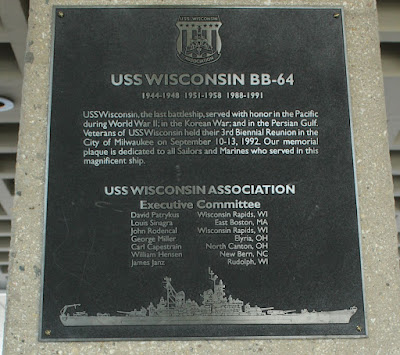 USS Wisconsin, the last battleship, served with honor in the Pacific during World War II; in the Korean War; [sic] in the Korean War; [sic] and in the Persian Gulf. Veterans of the USS Wisconsin held their 3rd Biennial Reunion in the City of Milwaukee on September 10-13, 1992. Our memorial plaque is dedicated to all Sailors and Marines who served in [sic] this magnificent ship.

The plaque is mounted to a pillar inside the
Milwaukee County War Memorial Center.

USS Wisconsin out to sea
This media file is in the public domain.
Click here for more information.

Emblem of the USS Wisconsin BB-64
This media file is in the public domain.
Click here for more information.