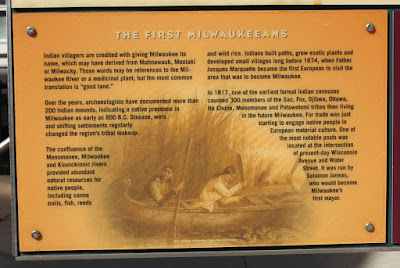 Indian villagers are credited with giving Milwaukee its name, which may have derived from Mahnawauk, Meolaki or Milwacky. Those words may be references to the Milwaukee River or a medicinal plant, but the most common translation is "good land."

Over the years, archaeologists have documented more than 200 Indian mounds, indicating a native presence in Milwaukee as early as 800 B.C. Disease, wars and shifting settlements regularly changed the region's tribal makeup.

The confluence of the Menomonee, Milwaukee and Kinnickinnic rivers provided abundant natural resources for native peoples, including canoe trails, fish, reeds, and wild rice. Indians built paths, grew exotic plants and developed small villages long before 1674, when Father Jacques Marquette became the first European to visit the area that was to become Milwaukee.

In 1817, one of the earliest formal Indian censuses counted 300 members of the Sac, Fox, Ojibwa, Ottawa, Ho Chunk, Menomonee and Potawatomi tribes then living in the future Milwaukee. Fur trade was just starting to engage native people in European material culture. One of the most notable posts was located at the intersection of present-day Wisconsin Avenue and Water Streets. It was run by Solomon Juneau, who would become Milwaukee's first mayor.

The marker is located along Milwaukee's River Walk, and is accessible from eastbound East Wisconsin Avenue on the east bank of the Milwaukee River, at or near 7968 North Riverwalk Way, Milwaukee, Wisconsin 53202.

See also, Every Building Tells A Story, also at this location.

The marker is in the left corner of this larger sign. 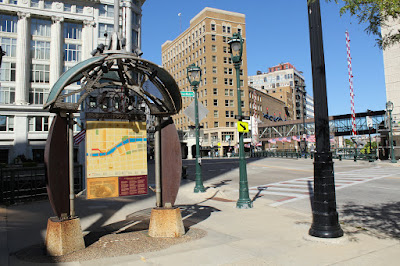 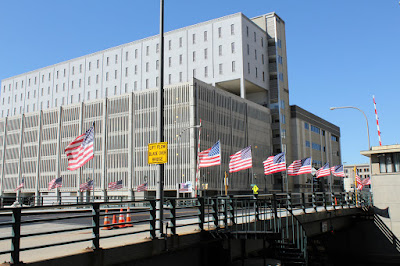 Nearby bridge decorated in memory of September 11.