In most cities across the nation, African Americans were denied access to the newer and more affluent parts of those cities. Milwaukee was no exception.

Discrimination in housing and other types of racial discrimination were legal in the United States until the passage of the landmark Civil Rights Bills of the 1960's.

In Milwaukee's early years, African Americans were limited as to where they could live, work and play. They responded to this segregation by putting their energy into developing their own community, transforming this "ghetto" or "inner city" into a lively and exciting business, social and entertainment district. This district became known as "Bronzeville."

The main street of this community was Walnut  Street, especially between 3rd Street (now M.L. King Drive and 12th Street). By the 1930's the number of African American-owned businesses exceeded all others with the highest concentration between 6th and 9th Streets.

The growth of Bronzeville paralleled the growth of African American businesses in Milwaukee. It sparked the formation of many business, civic and social organizations designed to develop and maintain the vitality of the area.

The people there took great price in what they had accomplished and welcomed everyone to come to this neighborhood. There was always entertainment going on. There were choirs, choruses, local bands and street corner"doowops." There were churches, finishing schools, social clubs, baseball teams, boxing clubs, ice cream parlors, ballrooms, supper clubs, taverns, restaurants, barber shops, beauty parlors and one of the finest movie theaters. Milwaukee's Bronzeville was frequented by world-renowned musicians like Duke Ellington, Dinah Washington, Cab Calloway and other entertainers. They played to appreciative audiences of all races.

This area thrived until the freeway construction and urban renewal projects of the 1960's and 1970's removed these homes and businesses in order to build the present day Walnut Street.


Urban Milwaukee, by Mutope Johnson (August 18th, 2013): The old heart of Milwaukee’s African America could beat again
Milwaukee's Bronzeville, devastated by freeway construction, remembered and understood by a scholar-artist who sees some rays of hope as the city celebrates Bronzeville Week. 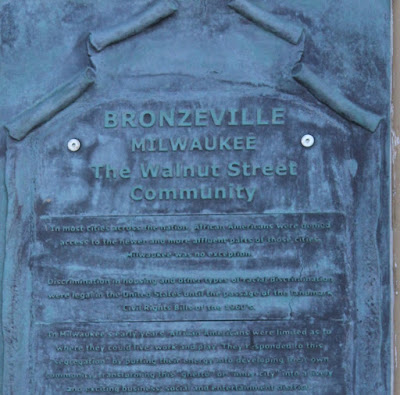 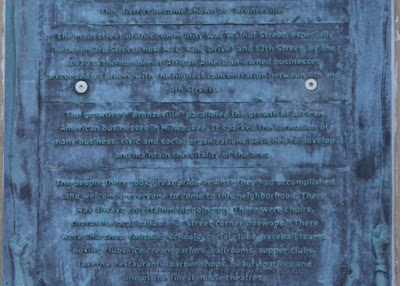 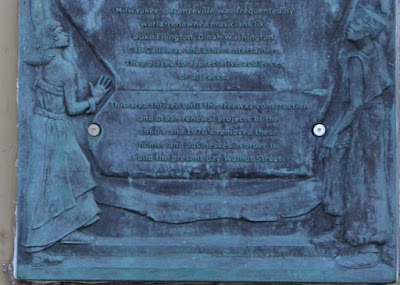 Bronzeville is located in Milwaukee, Wisconsin.