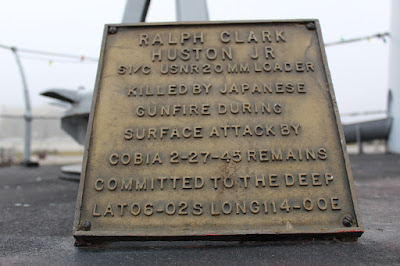 The marker is located on the north bank of the Milwaukee River, on The Manitowoc County 28 Boat Memorial Walk, on the bridge of the U.S.S. Cobia (a National Historic Landmark), at the Wisconsin Maritime Museum, at 75 Maritime Drive, Manitowoc, Wisconsin 54220.

Photo of Submariner Huston's burial at sea
0534 Huston Ralph Clark Jr. 755-96-96-S1c, USNR died of wounds received in gun action.
1800 Slowed to one third speed, 06-02S/114-00E.  Committed remains of Huston to the deep. [Mahanes: Ralph was wrapped in several mattress covers and his feet were weighted down with heavy fire bricks.  A board or slab was needed to slide the body into the sea.  somebody came up with the idea to use the door off the head.]  [Starmer: We took it off, and took it topside.]  [Madigan: We played a record of TAPS when we did this.]  [Pelton: 6 men holding the door the Captain and firing squad.]  [Stewart: When he slid into the water he was wrapped in the American Flag, and that went in too.]  [Mahanes: The Captain conducted A Christian burial service that couldn't have been any finer had it been held at Arlington National Cemetery.] 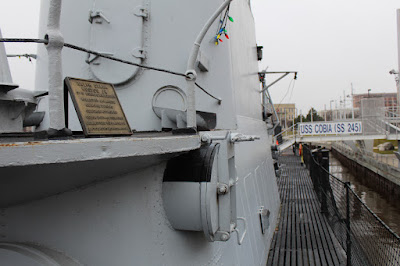 The marker is aboard the U.S.S. Cobia. 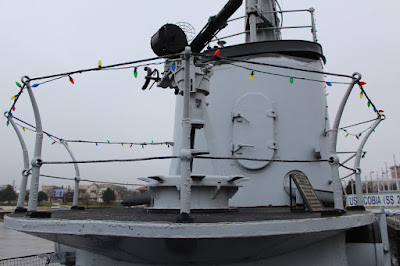 The memorial is visible to the right. 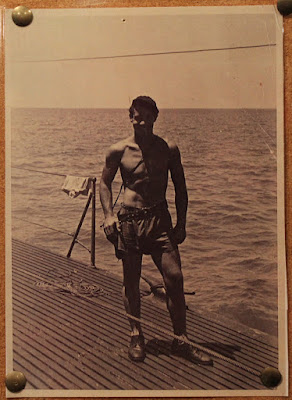 This photo of Submariner Ralph Huston is in the U.S.S. Cobia mess hall. 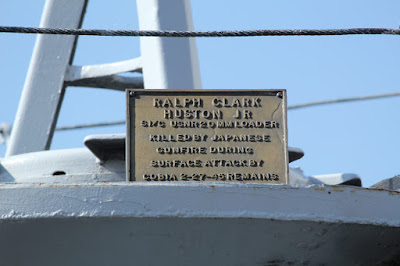 View from the dock (above and below) 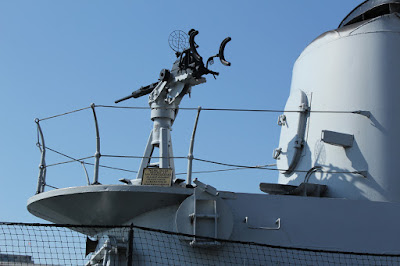