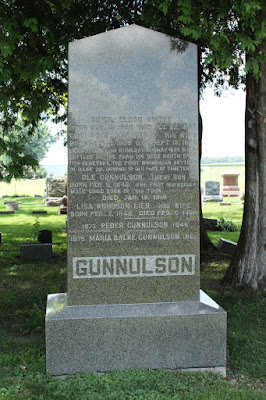 Settled on the farm 100 rods south of
this cemetery. The first Norwegian settler
in Dane Co. Buried in old part of cemetery.


The church and marker are located adjacent to westbound East Church Road, west of its intersection with Hillside Road, Cambridge, Wisconsin 53523. 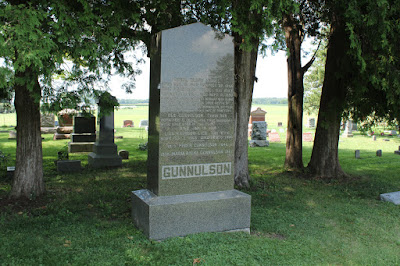 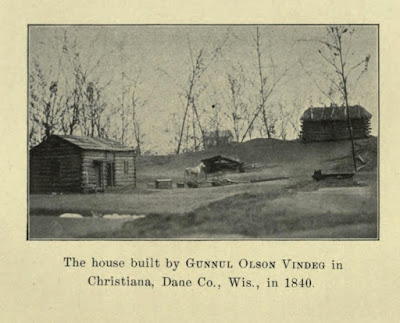 The house built by Gunnel Olson Vindeg in
Christiana, Dane Co., Wis., in 1840
The first chapter of Norwegian immigration, (1821-1840) its causes and results. With an
introduction on the services rendered by the Scandinavians to the world and to America,
by Anderson, Rasmus Björn, 1846-1936
This media file is in the public domain.

The first Norwegians located there in the spring and summer of 1840. Those who located there that year were Gunnul Olson Vindeg . . .

In the town of Christiana, Magne Bystol and Anders Finno are to be counted among the pioneer settlers. In Deerfield, Dane county, N. Gilderhus was the first to purchase land, but Nils Bolstad built the first house there in 1841. His wife, Anna, the sister of Gunnul Vindeg, was at that time the only white woman in that town.

. . . I am inclined to think that Gunnul Olson Vindeg built the first house in that township . . . The first township north of Christiana is Deerfield, and there the first Norwegian to select land and build a house was Nils L. Bolstad. In 1841 he married, as stated, Anna, a sister of Gunnul O. Vindeg, and the same year he built his house in Deerfield, where his wife was the first white woman.

. . . In my opinion Gunnul Olson Vindeg was the first Norwegian to build a house and actually locate in what is now the town of Christiana, and so far as I have been able to make out, he was the first Norwegian to settle in Dane count. He came to America in 1839 from Rolloug in Numedal, where he was born August 16, 1808. He was to have come with Ansten Nattestad in the "Emelia," but he was detained by the sickness of his child, and so came on later by another route. He found his way by the usual immigrant route from New York to Chicago, and from there he came on to Jefferson Prairie, near Beloit, where the majority of the Nattestad company had settled. There he spent the first winder, but early in the spring of 1840 he built or bought or borrowed a boat, and in it he and a companion by name Gjermund Knudson Sunde, who also had come from Numedal in 1839, navigated up Rock river, and, as the story goes, up Koshkonong lake and Koshkonong creek into the town of Christiana, and so found the parcel of land where he located and lived until his death, which occurred October 22, 1846. He was killed by an accident. Gjermund K. Kunde also selected forty acres of land, which he afterwards sold to Ole Lier. Gjermund Sunde lost his reason, and in this condition he disappeared, and doubtless soon perished.

Gunnul Olson had two sisters and a brother who came to American a year or two later. One of his sisters, Berit, married a Swede, John G. Smith, who pretended to be both minister and preacher. His wife soon died, and John G. Smith left about 1844. He went first to Chicago, but soon disappeared from that city, and has not since been heard from.

The other sister, Anna, married Nils Larson Bolstad, as stated above. The brother's name was Helleik, who, in company with Lars Kvendalen and a man called Nils Halling, made counterfeit Norwegian paper money in the early forties, and went to Norway with it, where they were arrested, found guilty and put in prison. The township in which Gunnul Vindeg settled in 1840 contained at the time less than a dozen settlers, and as several Norwegians soon located there it was called Christiana (should have been Christiania), after the capital of Norway, on the suggestion of Gunnul Olson Vinberg.

Gunnul Olson Vindeg and Gjermund Sunde returned with their boat to Beloit, and soon after we find Gunnul moving with his wife in a covered wagon from Jefferson Prairie to Koshkonong. He stopped at Milton, Wis., on his way for repairs. Ezra Goodrich, of Milton, and Jones, of Ft. Atkinson, visited him in his home early in the summer of 1840. They were caught in a heavy rain storm and drove to Gunnul Olson's shanty, where they stopped.

Ezra Goodrich says: "We stayed at Gunnul Olson's and got dinner. It was the first Norwegian dinner we had ever eaten, but we were as hungry as a wolf and we don't remember to have relished a better meal. They had only fried pork, warm biscuits and coffee. The coffee was made in a little copper kettle that was as round as a ball. The shanty had but one small room with a bed in the corner, and a ladder up to a little low attic under the roof. It had a little stall attached to one end for the cow. Mr. Gunnul Olson was subsequently killed by a loaded wagon tipping over him."

. . . There is a son of Gunnul Olson Vindeg still living on Koshkonong. His name is Ole Gunnulson, and he is a man of great intelligence and most excellent character.

The first chapter of Norwegian immigration, (1821-1840) its causes and results. With an introduction on the services rendered by the Scandinavians to the world and to America, by Anderson, Rasmus Björn, 1846-1936, pages 335-355 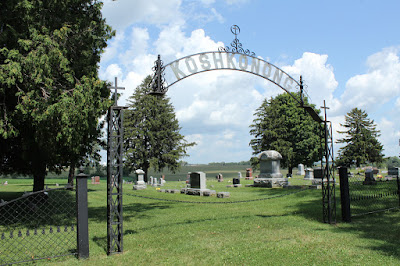 The headstone is at the Koshkonong Cemetery,
to the left, in the shade. 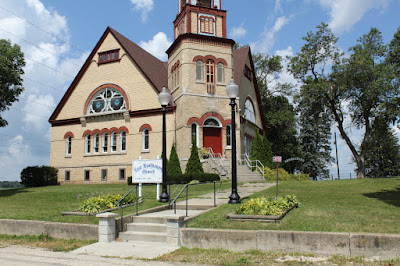 The cemetery is behind the church; the cemetery entrance
is visible in the distance, to the right. 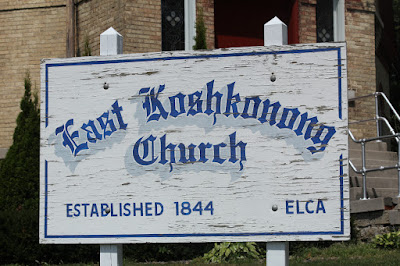 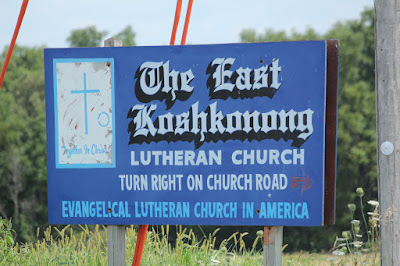