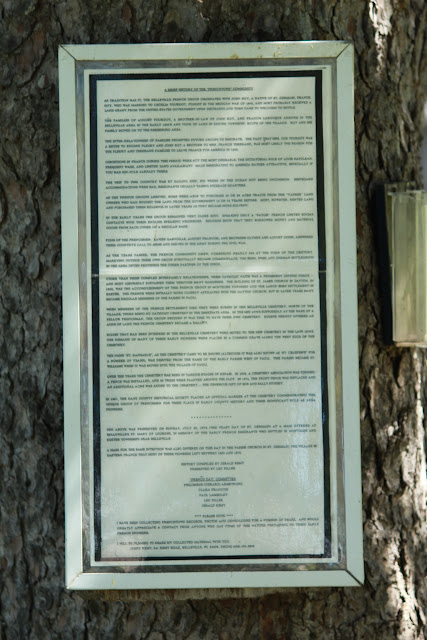 As tradition has it, the Belleville French group originated with John Roy, a native of St. Germain, France. Roy, who was married to Cecelia Tourdot, fought in the Mexican War of 1848, and most probably received a land grant from the United States government upon discharge and then came to Wisconsin to settle.

The families of August Tourdot, a brother-in-law of John Roy, and Francis Larouque arrived in the Belleville area in the early 1850s and took up land in Exeter Township, south of the village. Roy and his family moved on to the Reedsburg area.

The inter-relationship of families prompted future groups to emigrate. The fact that Mrs. Gus Tourdot was a sister to Eugene Fleury and John Roy a brother to Mrs. Francis Tisserand, was most likely the reason for the Fleury and Tisserand families to leave France for America in 1853.

Conditions in France during the period were not the most desirable; the dictatorial rule of Louis Napolean, frequent wars, and limited land availability made immigrating to America rather attractive, especially if you had kin-folk already there.

The trip to this country was by sailing ship, six weeks on the ocean not being uncommon. Shipboard accommodations were bad, immigrants usually taking steerage quarters.

As the French groups arrived, some were able to purchase 40 or 80 acre tracts from the "Yankee" land owners who had brought the land from the government 10 or 15 years before. Most, however, rented land and purchased their holdings in later years as they became more solvent.

In the early years the group remained very close knit. Speaking only a "patois" French limited social contacts with their English speaking neighbors. Records show that they borrowed money and material goods from each other on a regular basis.

Four of the Frenchmen: Xavier Garvoille, August Francois, and brothers Olympe and August Genin, answered their country's call to arms and served in the army during the Civil War.

As the years passed, the French community grew, numbering nearly 500 at the turn of the century. Marrying outside their own group eventually became commonplace, the Irish, Swiss and German settlements in the area often providing the other partner of the union.

Other than their complex interfamily relationships, their Catholic faith was a prominent uniting force -- and most assuredly sustained them through many hardships. The building of St. James Church in Dayton, in 1869, was the accomplishment of this French group in Montrose Township and the large Irish settlement in Exeter. The French were initially more closely affiliated with the Dayton Church, but in later years many became regular members of the parish in Paoli.

When members of the French settlement died they were buried in the Belleville Cemetery, north of the village; there being no Catholic cemetery in the immediate area. In the mid 1870s supposedly at the wake of a fellow Frenchman, the group decided it was time to have their own cemetery. Eugene Pernot offered an acre of land the French Cemetery became a reality.

Bodies that had been interred in the Belleville Cemetery were moved to the new cemetery in the late 1870s. The remains of many of these early pioneers were placed in a common grave along the west edge of the cemetery.

The name "St. Raphael's", as the cemetery came to be known (although it was also known as "St. Celestin's" for a number of years), was derived from the name of the early parish west of Paoli. This parish became St. Williams when it was moved into the village of Paoli.

The marker is located at Frenchtown Cemetery on westbound Frenchtown Road, west of its intersection with Piller Road, Belleville, Wisconsin 53508. 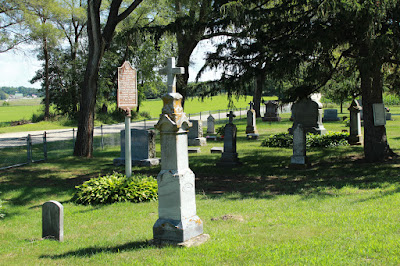 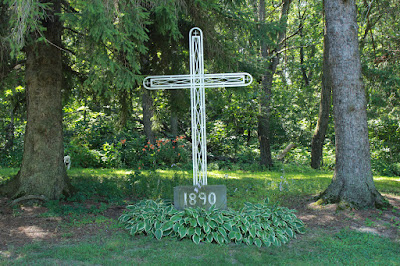 Cross at the top of the hill. 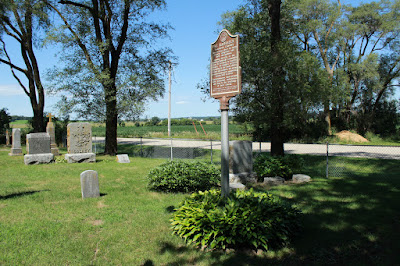 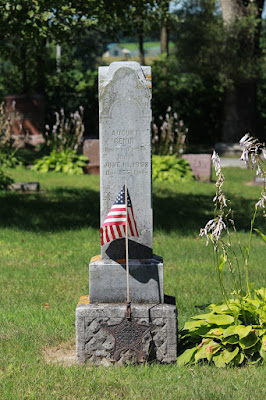 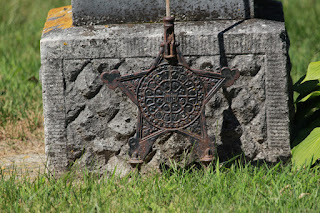 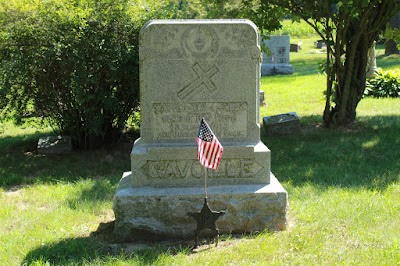 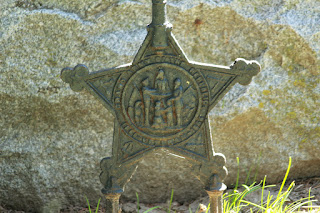 The marker is located in Belleville, Wisconsin.