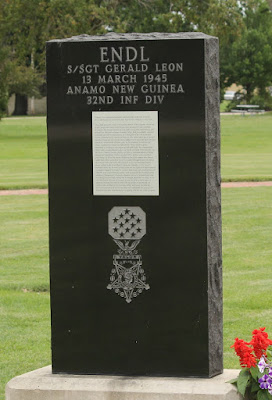 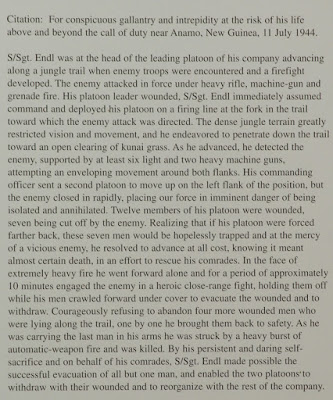 Citation: For conspicuous gallantry and intrepidity at the risk of his life above and beyond the call of duty near Anamo, New Guinea, on 11 July 1944.

S/Sgt. Endl was at the head of the leading platoon of his company advancing along a jungle trail when enemy troops were encountered and a fire fight developed. The enemy attacked in force under heavy rifle, machine-gun, and grenade fire. His platoon leader wounded, S/Sgt. Endl immediately assumed command and deployed his platoon on a firing line at the fork in the trail toward which the enemy attack was directed. The dense jungle terrain greatly restricted vision and movement, and he endeavored to penetrate down the trail toward an open clearing of Kunai grass. As he advanced, he detected the enemy, supported by at least six light and two heavy machine guns, attempting an enveloping movement around both flanks. His commanding officer sent a second platoon to move up on the left flank of the position, but the enemy closed in rapidly, placing our force in imminent danger of being isolated and annihilated. Twelve members of his platoon were wounded, seven being cut off by the enemy. Realizing that if his platoon were forced farther back, these seven men would be hopelessly trapped and at the mercy of a vicious enemy, he resolved to advance at all cost, knowing it meant almost certain death, in an effort to rescue his comrades. In the face of extremely heavy fire he went forward alone and for a period of approximately 10 minutes engaged the enemy in a heroic close-range fight, holding them off while his men crawled forward under cover to evacuate the wounded and to withdraw. Courageously refusing to abandon four more wounded men who were lying along the trail, one by one he brought them back to safety. As he was carrying the last man in his arms he was struck by a heavy burst of automatic fire and was killed. By his persistent and daring self-sacrifice and on behalf of his comrades, S/Sgt. Endl made possible the successful evacuation of all but one man, and enabled the two platoons to withdraw with their wounded and to reorganize with the rest of the company. 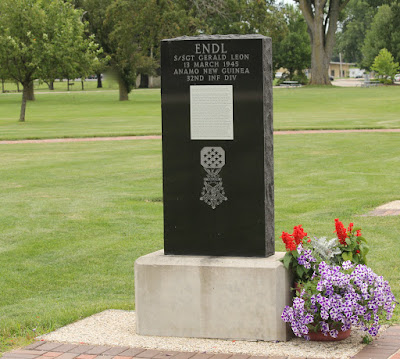 S/Sgt Gerald Leon Endl's memorial is first on the left.