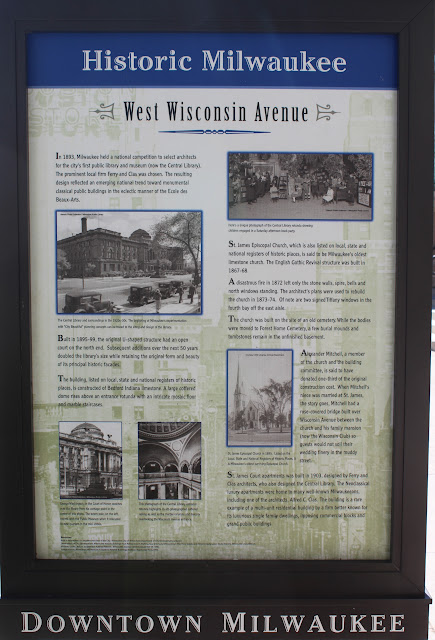 In 1893, Milwaukee held a national competition to select architects for the city’s first public library and museum (now the Central Library). The prominent local firm Ferry and Clas was chosen. The resulting design reflected an emerging national trend toward monumental classical public buildings in the eclectic manner of the Ecole des Beaux-Arts.

Built in 1895-99, the original U-shaped structure had an open court on the north end. Subsequent additions over the next 50 years doubled the library’s size while retaining the original form and beauty of its principal historic façades.

The building, listed on local, state and national registers of historic places, is constructed of Bedford Indiana limestone. A large coffered dome rises above an entrance rotunda with an intricate mosaic floor and marble staircases.

St. James Episcopal Church, which is also listed on local, state and national registers of historic places, is said to be Milwaukee’s oldest limestone church. The English Gothic Revival structure was built in 1867-68.

A disastrous fire in 1872 left only the stone walls, spire, bells and north windows standing. The architect’s plans were used to rebuild the church in 1873-74. Of note are two signed Tiffany windows in the fourth bay off the east aisle.

The church was built on the site of an old cemetery. While bodies were moved to Forest Home Cemetery, a few burial mounds and tombstones remain in the unfinished basement.

Alexander Mitchell, a member of the church and the building committee, is said to have donated one-third of the original construction cost. When Mitchell’s niece was married at St. James, the story goes, Mitchell had a rose-covered bridge built over Wisconsin Avenue between the church and his family mansion (now the Wisconsin Club) so guests would not soil their wedding finery in the muddy street.

St. James Court apartments was built in 1903, designed by the Ferry and Clas architects, who also designed the Central Library. The Neoclassical luxury apartments were home to many well-known Milwaukeeans, including one of the architects, Alfred C. Clas. The building is a rare example of a multi-unit residential building by a firm better know for its luxurious single family dwellings, imposing commercial blocks and grand public buildings. 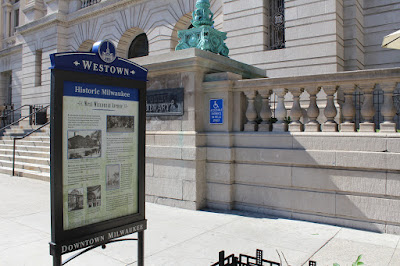 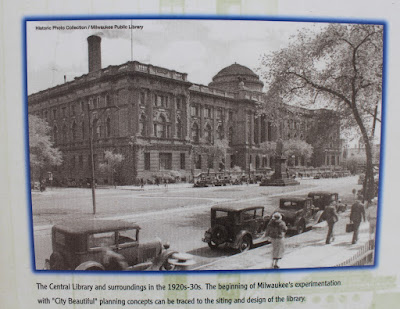 The Central Library and surroundings in the 1920s-30s. The beginning of Milwaukee’s experimentation with “City Beautiful” planning concepts can be traced to the siting and design of the library. 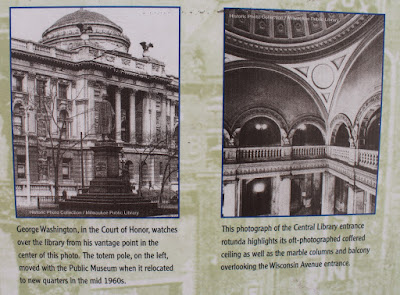 Left photo: George Washington, in the Court of Honor, watches over the library from his vantage point in the center of this photo. The totem pole, on the left, moved with the Public Museum when it relocated to new quarters in the mid 1960s.

Right Photo: This photo of the Central Library entrance rotunda highlights its oft-photographed coffered ceiling as well as the marble columns and balcony overlooking the Wisconsin Avenue entrance. 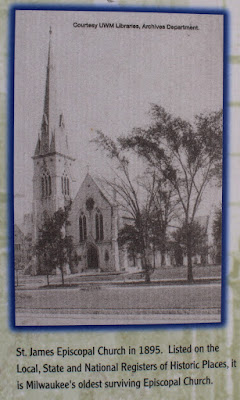 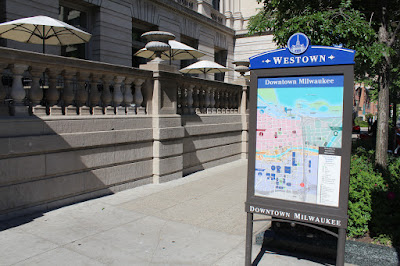 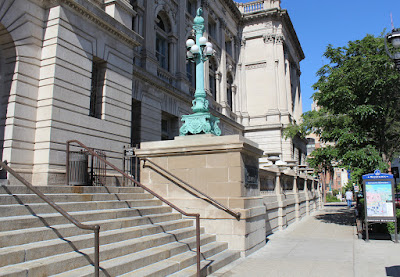 The marker is at the entrance to the Milwaukee Central Library. 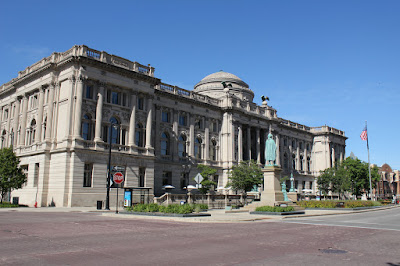