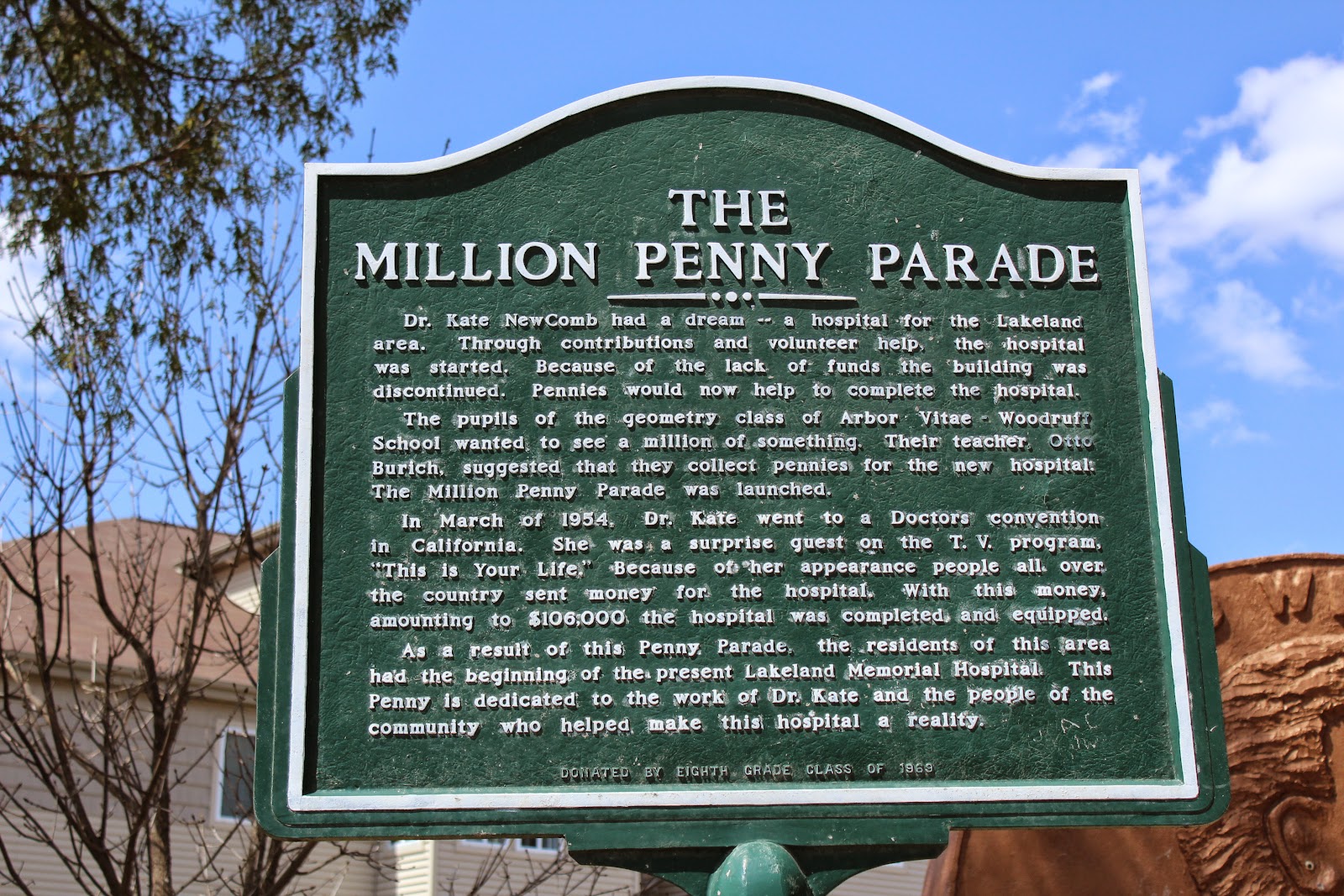 Dr. Kate NewComb [sic] had a dream -- a hospital for the Lakeland area. Through contributions and volunteer help, the hospital was started. Because of the lack of funds the building was discontinued. Pennies would now help to complete the hospital.

The pupils of the geometry class of Arbor Vitae - Woodruff School wanted to see a million of something. Their teacher, Otto Burich, suggested that they collect pennies for the new hospital. The Million Penny Parade was launched.

In March of 1954, Dr. Kate went to a Doctors convention in California. She was a surprise guest on the T.V. program "This is Your Life." Because of her appearance people all over the country sent money for the hospital. With this money, amounting to $106,000 the hospital was completed and equipped.

As a result of this Penny Parade, the residents of this area had the beginning of the present Lakeland Memorial Hospital. This Penny is dedicated to the work of Dr. Kate and the people of the community who helped make this hospital a reality.

The marker is located at the northwest corner of the intersection of Hemlock Street and 3rd Avenue,  at or near 820 3rd Avenue, Woodruff, Wisconsin 54568.

Dr. Kate Museum: Worlds [sic] Largest Penny
This link is filled with all kinds of penny facts. For example, 1,000,000 pennies placed side-by-side will cover an area of 3906.24 square feet!

See also, The World's Largest Penny, also at this location. 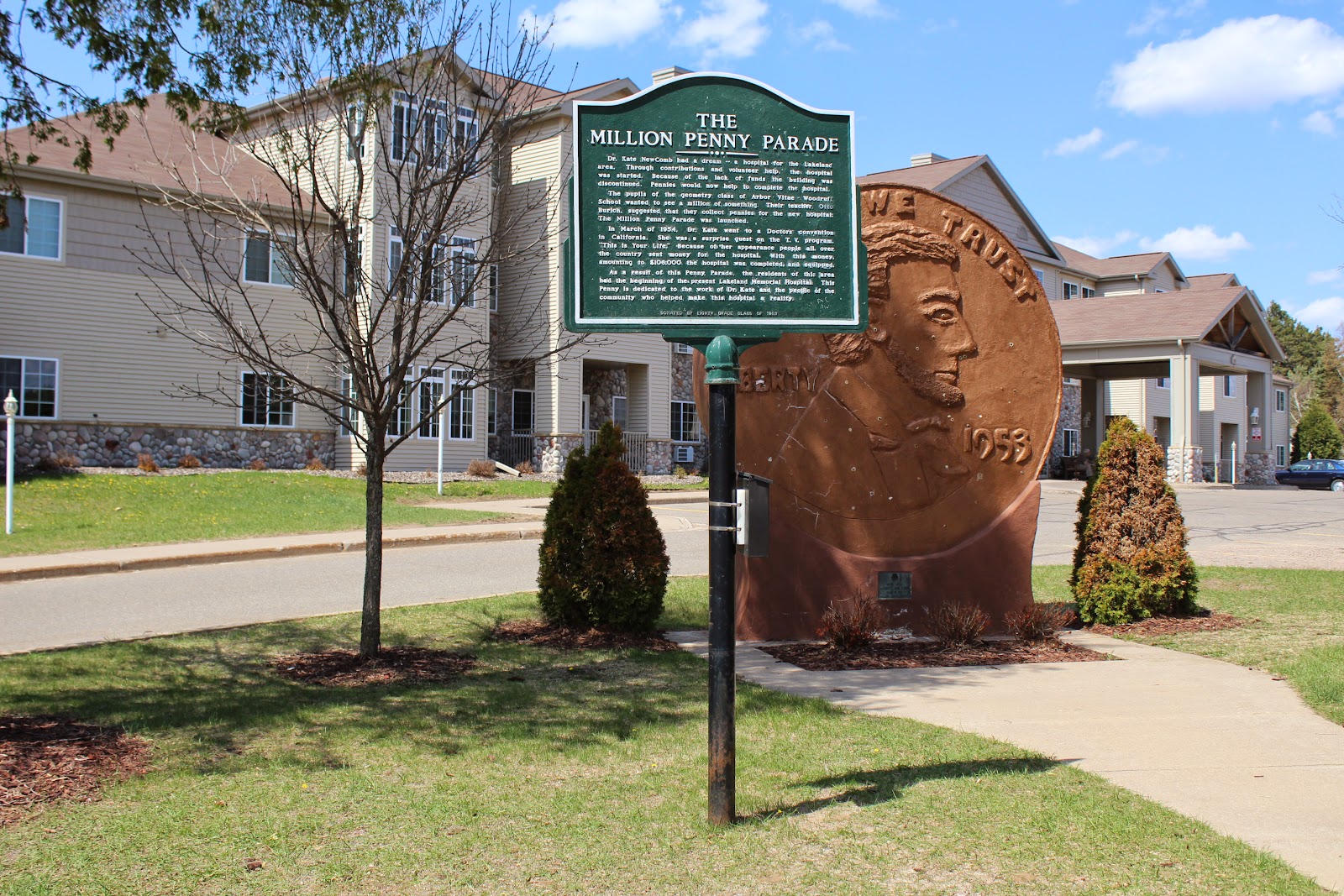 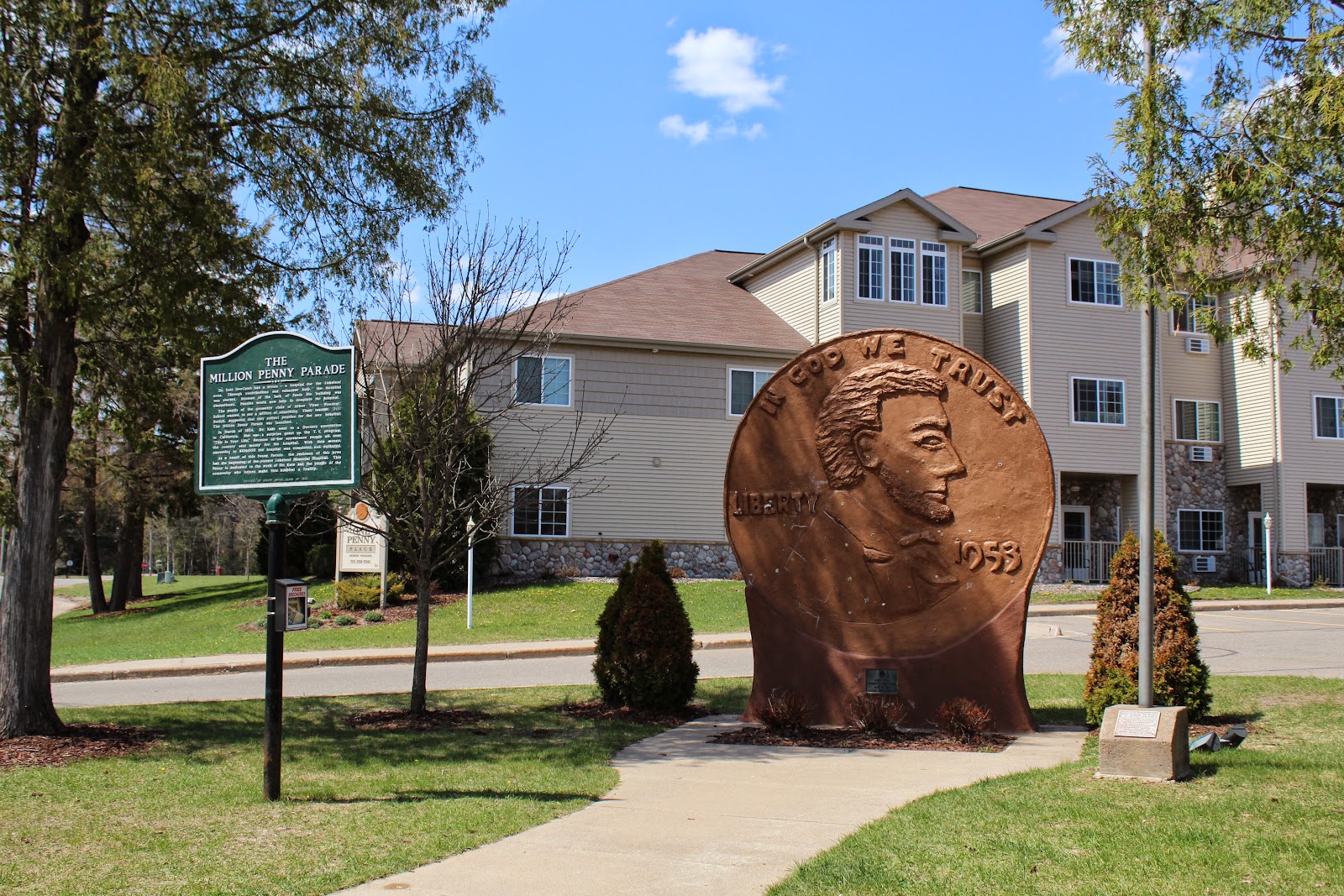 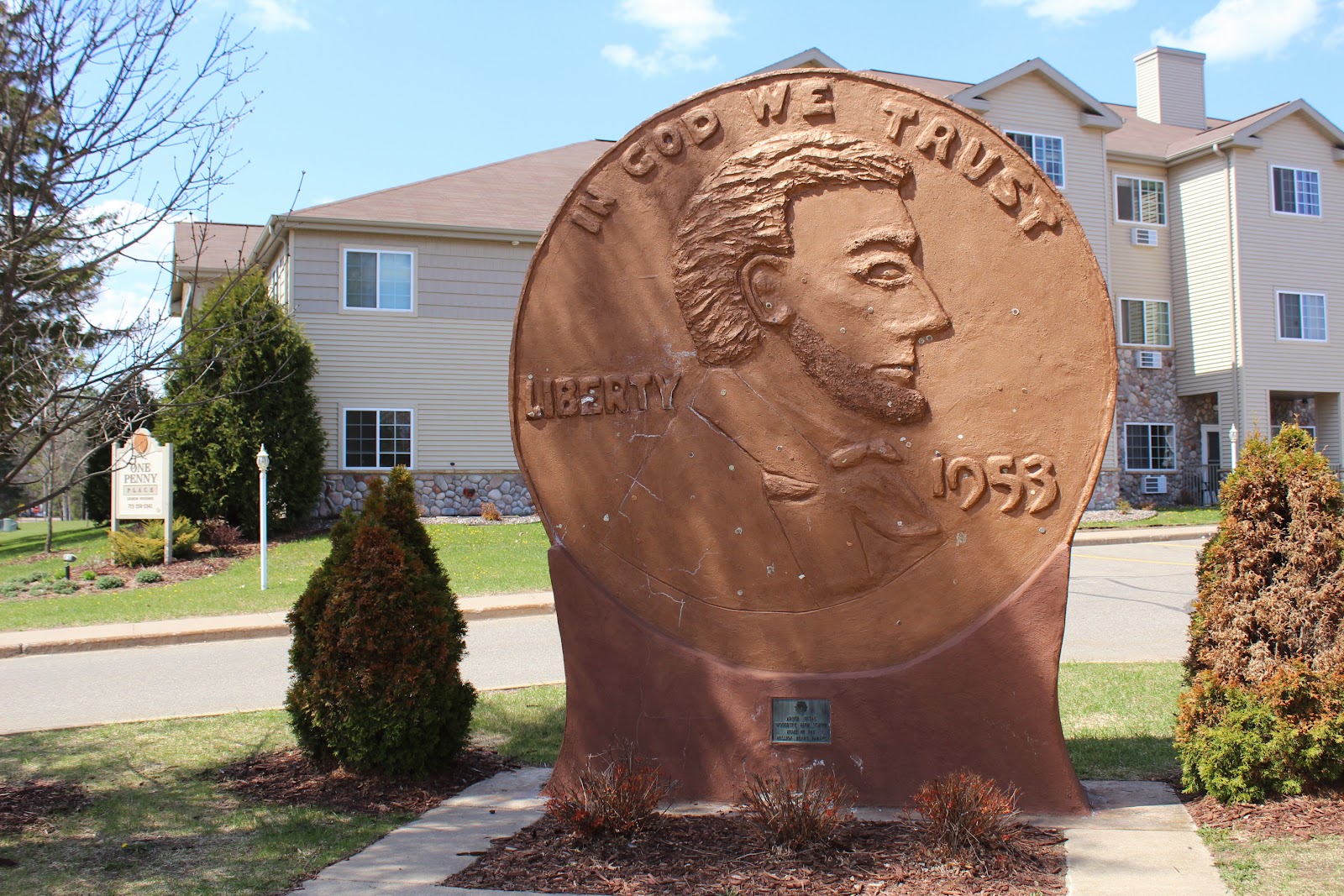 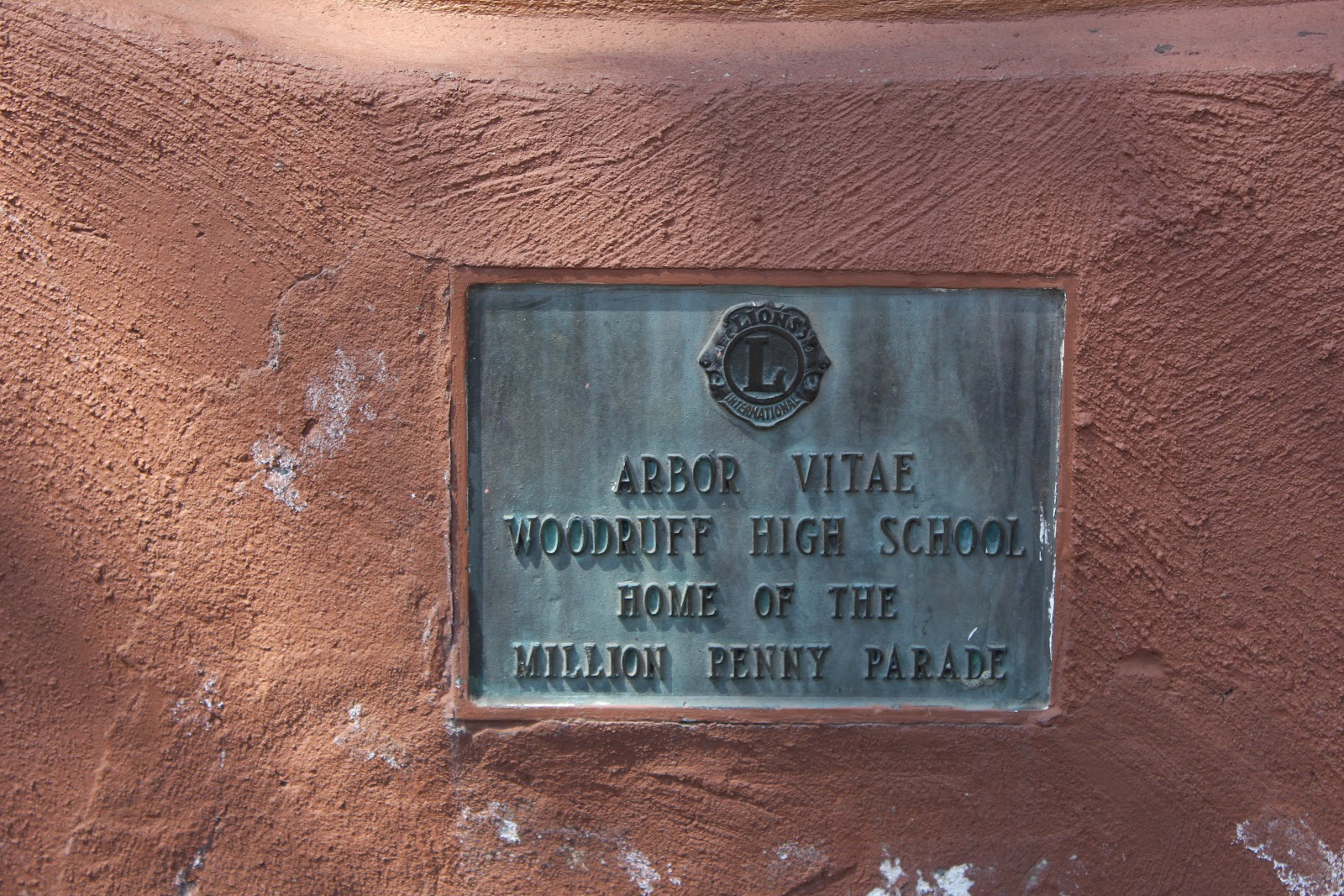 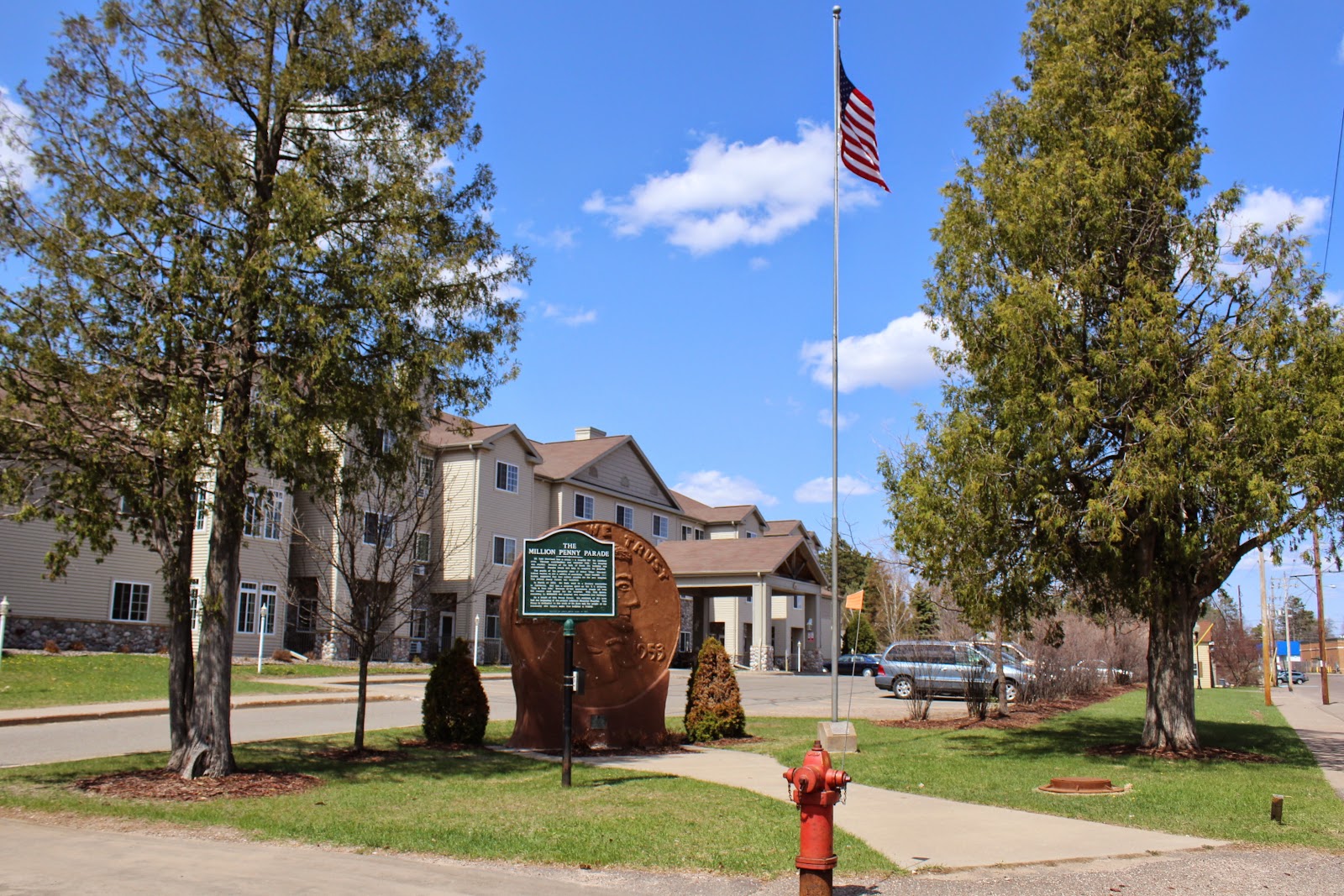 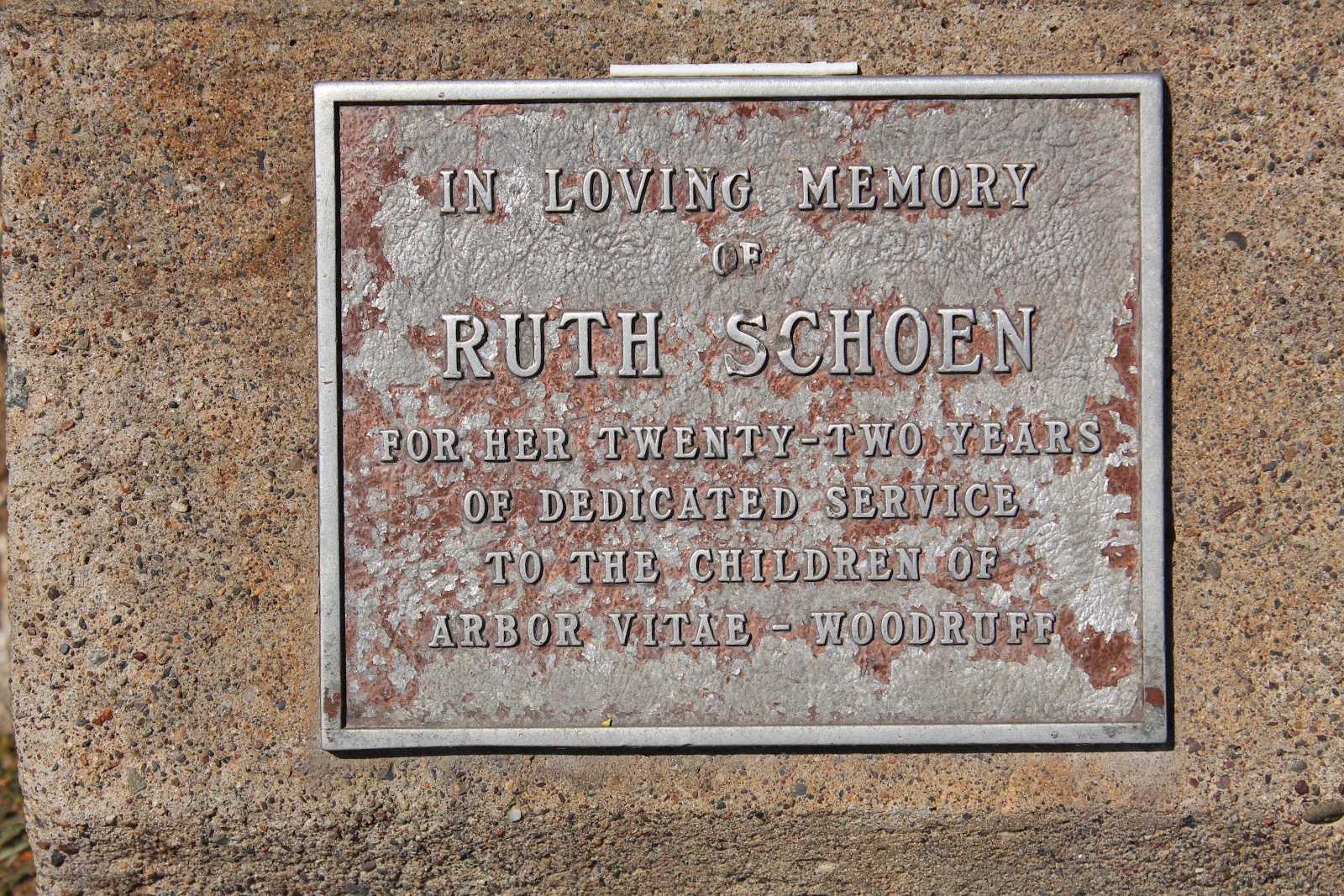 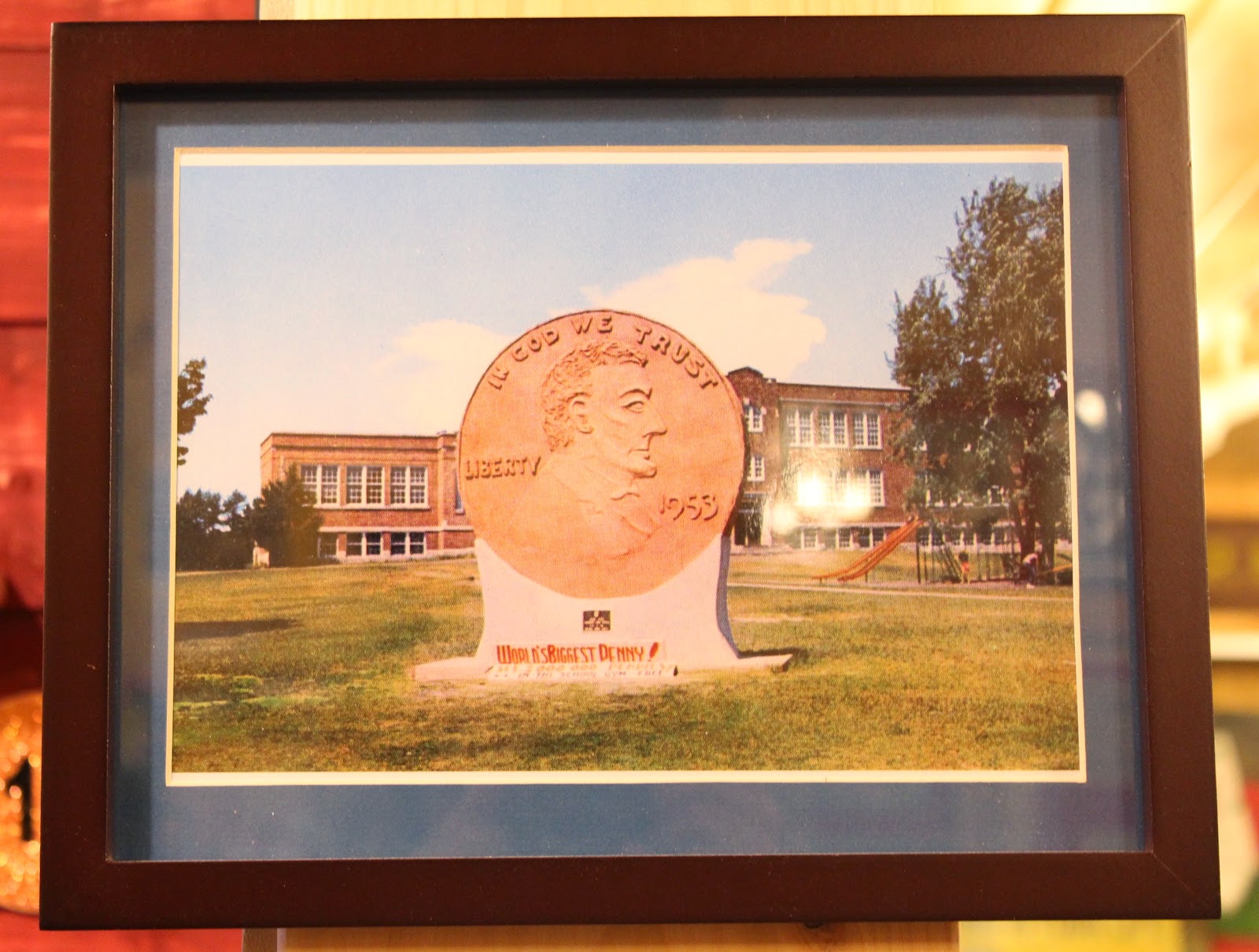 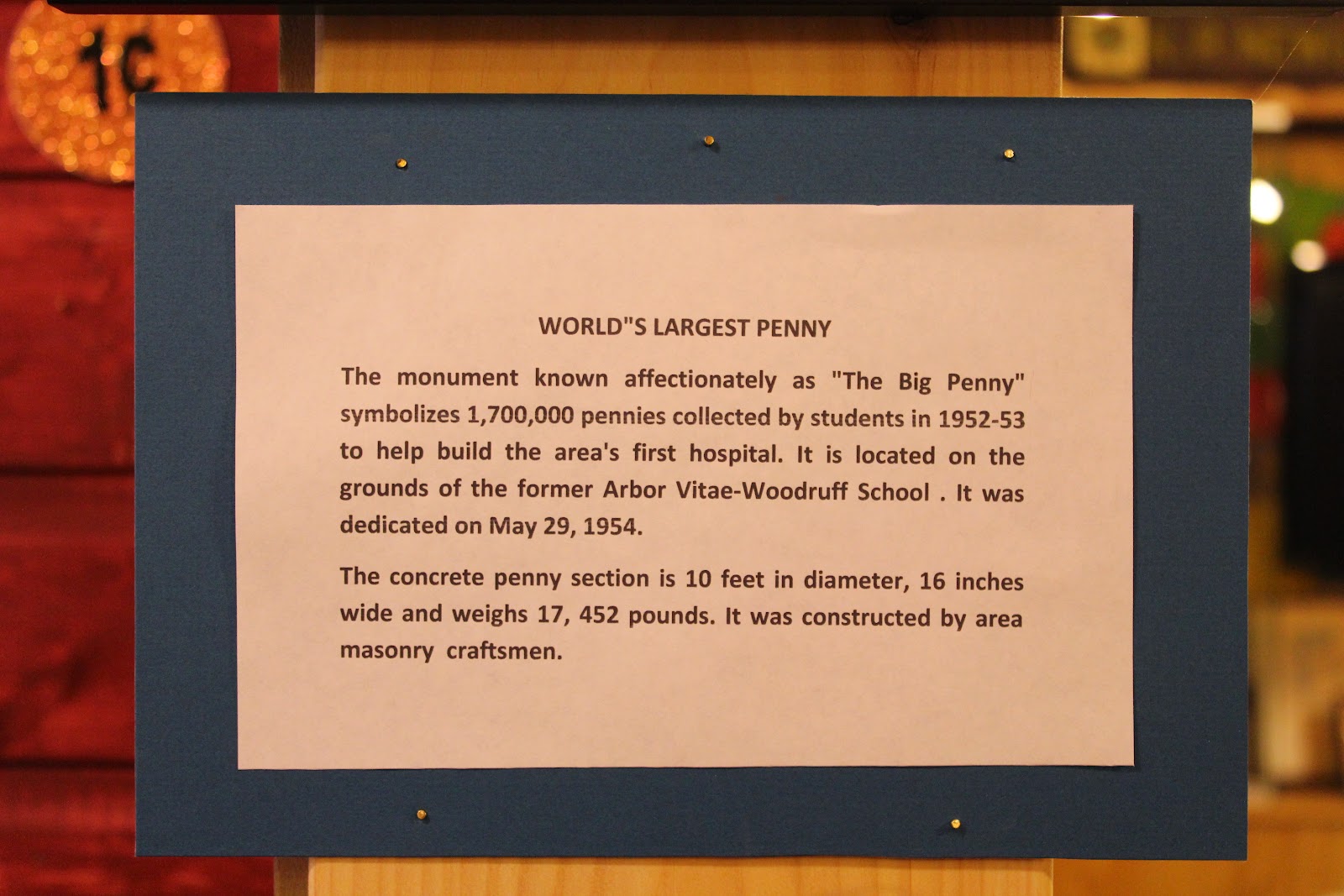 The above are located at the Dr. Kate Pelham Newcomb Museum.

The monument known affectionately as "The Big Penny" symbolizes 1,700,000 pennies collected by students in 1952-53 to help build the area's first hospital. It is located on the grounds of the former Arbor Vitae-Woodruff School. It was dedicated on May 29, 1954.

The concrete penny section is 10 feet in diameter, 16 inches wide and weighs 17,452 pounds. It was constructed by area masonry craftsmen. 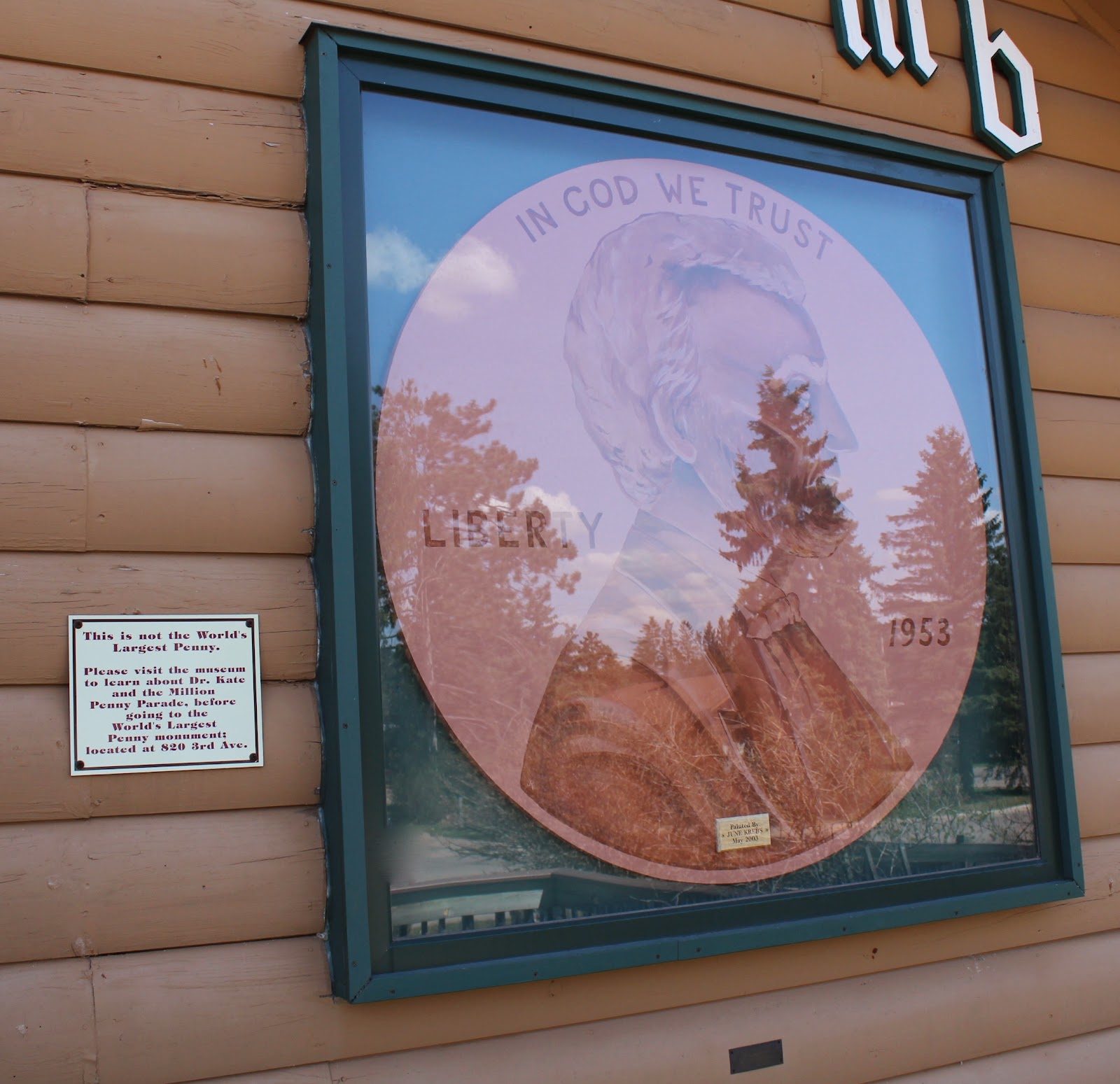 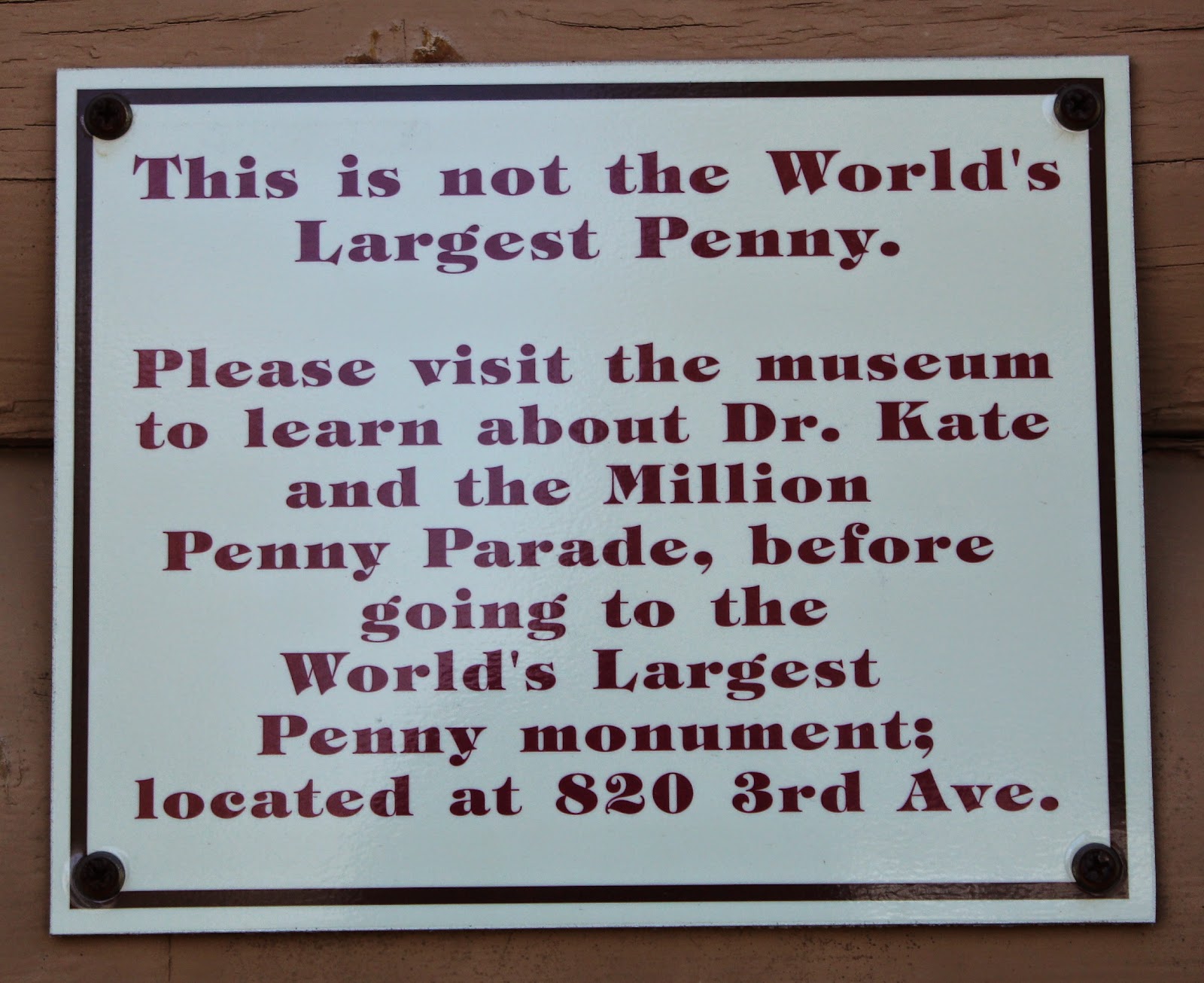 The above are located at the Dr. Kate Pelham Newcomb Museum.

This is not the World's
Largest Penny.

Please visit the museum
to learn about Dr. Kate
and the Million
Penny Parade, before
going to the
World's Largest
Penny monument,
located at 820 3rd Ave. 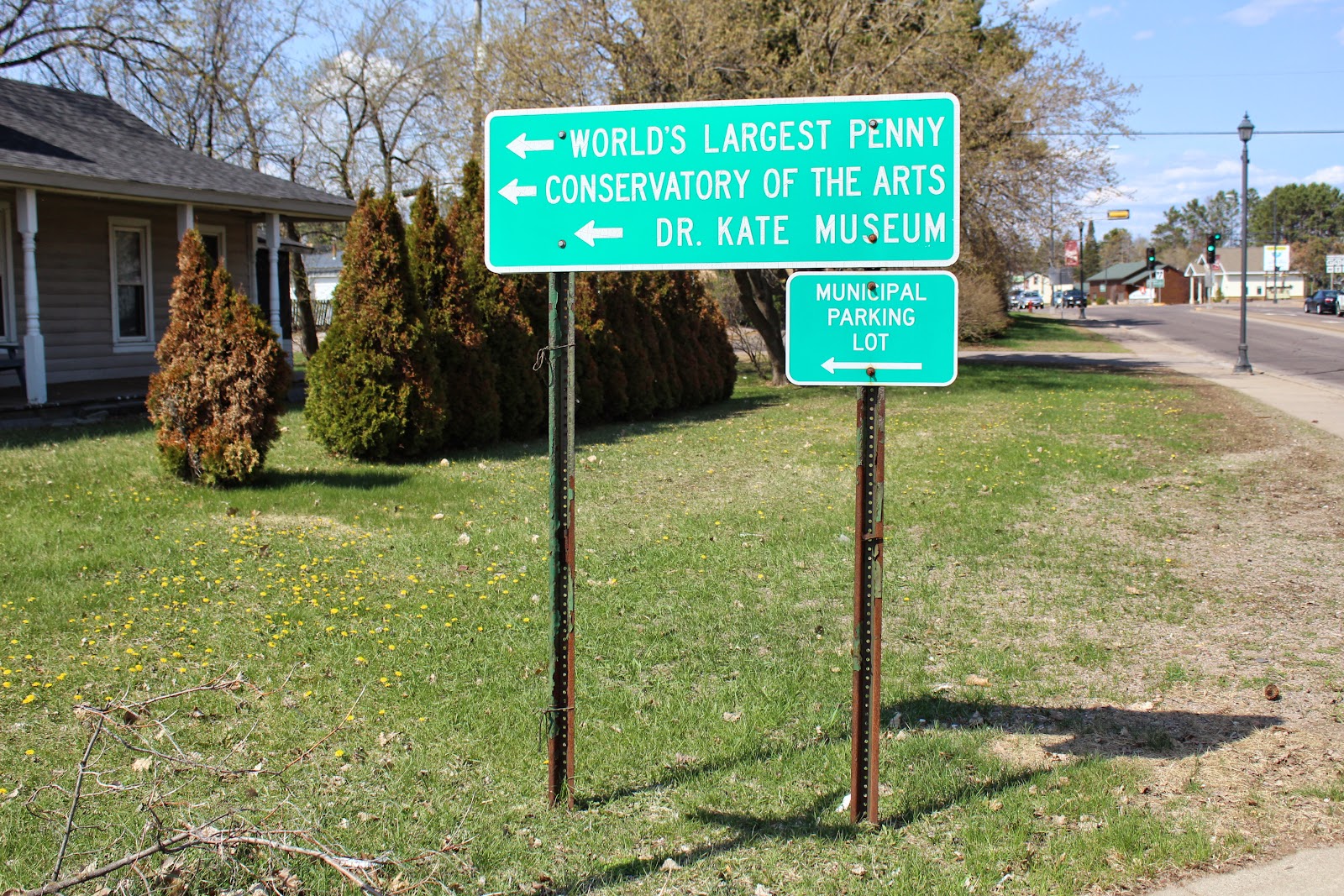 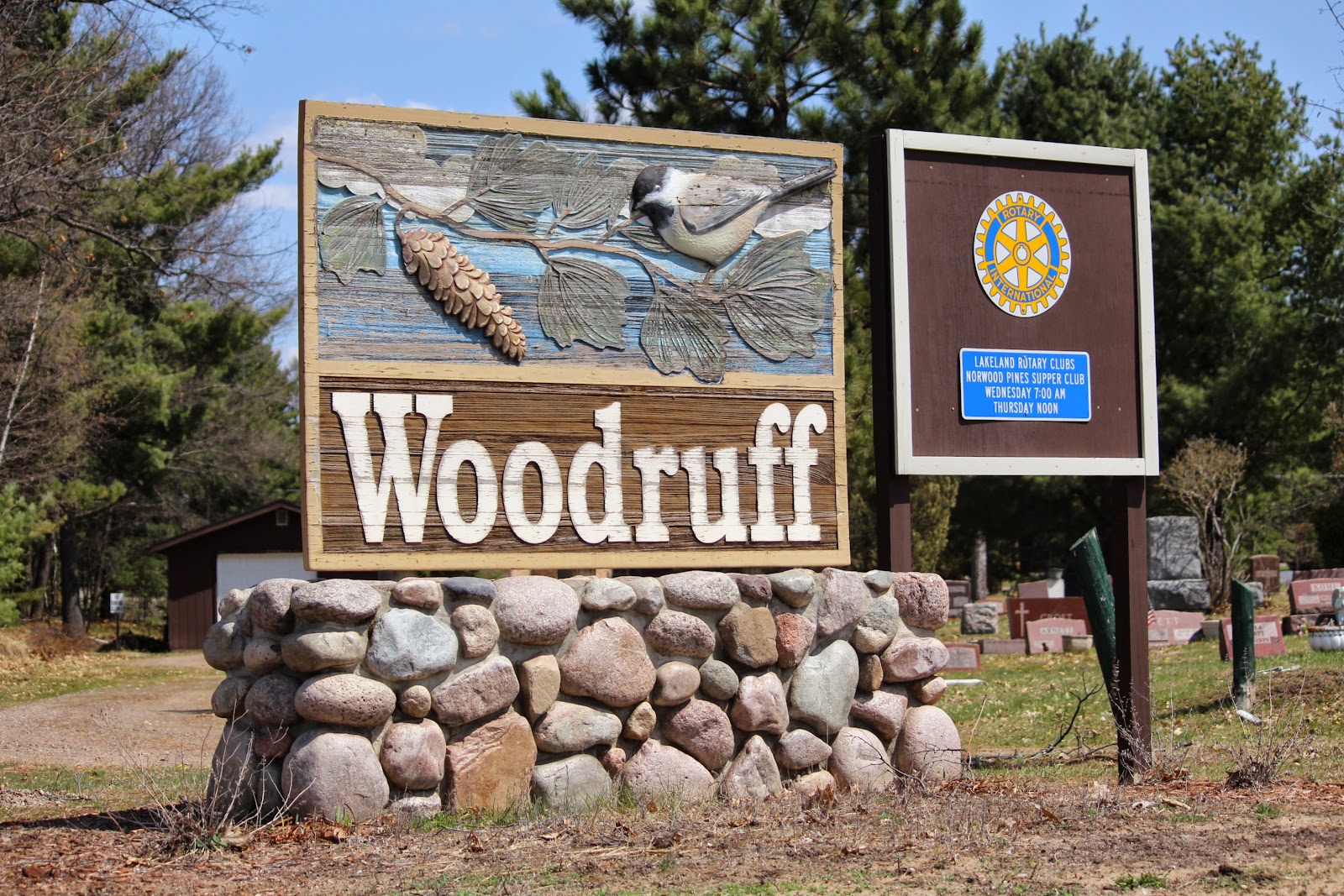 The marker is located in Woodruff, Wisconsin.