The Ice Industry on Half Moon Lake 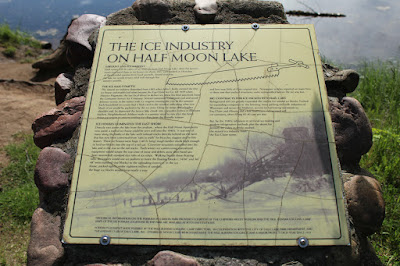 THE ICE INDUSTRY
ON HALF MOON LAKE

Sawdust and Ice Harvest
Each winter 350 lb. cakes of ice were cut from Half Moon Lake. After the harvest crews conveyed them to ice houses on shore, they were packed in 18 inches of the plentiful sawdust from local sawmills. Stored that way, the lake ice would remain solid well through hot summer months.

The Ice Man Cometh
The natural ice industry flourished from 1885 when John J. Kelly erected the first ice house and established what became the Eau Claire Ice Co. till 1959 when Maurice Hagmann, the last local driver to deliver ice, drew his final paycheck from the Consumer Service Ice Company. Several companies combined coal and wood delivery service in the winter with ice wagons crossing the city in the summer. Each household on the route had a flash card in the window indicating what size block of ice would be packed in by the ice man. Using tongs and a leather shoulder pad, he deposited the frozen chunk into a wooden icebox in the users kitchen. Neighborhood children made it a summer ritual to run after the horse drawn wagon to receive cooling ice chips from the friendly iceman.

Ice Houses Dominated the East Shore
Directly east across the lake from this podium, where the Half Moon Apartments now stand, a typical ice house could be seen well into the 1940's. It was one of many along the banks of the lake with railroad tracks directly behind the land that has now been converted from "rails to trails" for bicycles, joggers and in-line skaters. These ice houses were huge (140 ft. long) rough lumber sheds high enough to feed ice blocks into the top of a rail car. Conveyer structures extended into the lake and in the rear to the rail tracks. Each winter ice cutters using specialized equipment would scrape the top crust of snow and debris away then hand saw (later motorized) standard size rafts of ice strips. Walking besides these floating rafts the cutters would use ice pushers to move the floating blocks (24/36" and 36/48"were standard size blocks) to the uploading conveyer. In the ice house, packed ice blocks would keep nearly a year and lose very little of their original size. Newspaper articles reported on many fires in these saw dust packed structures, some extinguished before the ice was lost.

Big Contracts for Ice Packed Into Rail Cars
Refrigerated rail cars greatly expanded the market for natural ice blocks. Pushed by expanding companies in the brewing, meat packing and milk industries of Wisconsin and across the Midwest, several ice harvesting operations in Eau Claire and Altoona did a fine business in refrigerated rail car contracts, often filling 35-40 cars per day.

But, by the 1940's, advances in artificial ice making and modern refrigeration methods plus the desire for sanitary ice cubes in drinks pushed the natural ice industry from the Eau Claire scene.

The marker is located in Carson Park, very near the Paul Bunyan Logging Camp Museum and a baseball diamond, alongside Halfmoon Lake, and is accessible from Carson Park Drive (which encircles the park and has no intersection with another other street), Eau Claire, Wisconsin 54703. 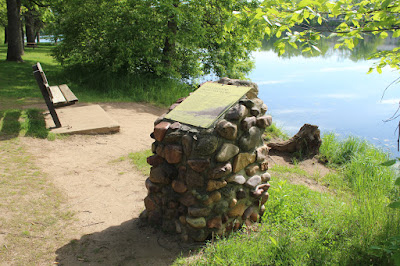 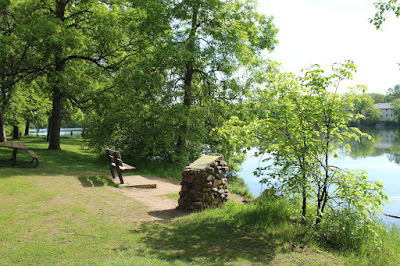 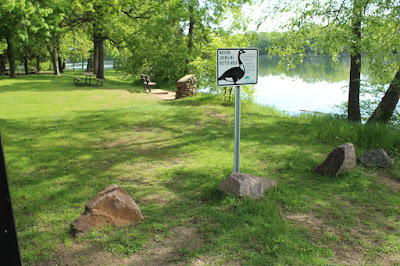 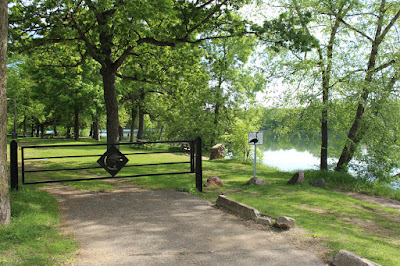 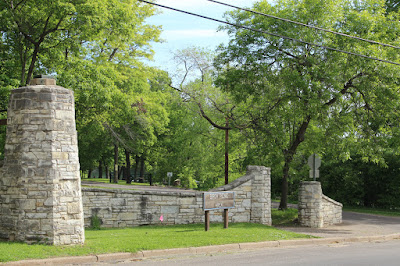 The marker is visible in the distance in the center of the photo. 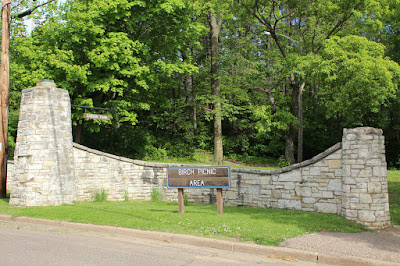 The marker is located at the Birch Picnic Area at the entrance to the park.