Industry on Half Moon Lake 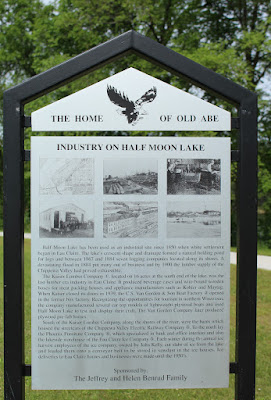 
INDUSTRY ON HALF MOON LAKE

Half Moon Lake has been used as an industrial site since 1850 when white settlement began in Eau Claire. The lake's crescent shape and drainage formed a natural holding pond for logs and between 1867 and 1884 seven logging companies located along its shores. A devastating flood in 1884 put many out of business and by 1900 the lumber supply of the Chippewa Valley had proved exhaustible.

The Kaiser Lumber Company (1), located on 16 acres at the south end of the lake, was the last lumber era industry in Eau Claire. It produced beverage cases and wire-bound wooden boxes for meat packing houses and appliance manufacturers such as Kohler and Maytag. When Kaiser closed its doors in 1939, the C.S. Van Gorden & Son Boat Factory (2) opened in the former box factory. Recognizing the opportunities for tourism in northern Wisconsin, the company manufactured several car top models of lightweight plywood boats and used Half Moon Lake to test and display their craft. The Van Gorden Company later produced plywood pre-fab homes.

South of the Kaiser Lumber Company, along the shores of the river, were the barns which housed the streetcars of the Chippewa Valley Electric Railway Company (3). To the north lay the Phoenix Furniture Company (4), which specialized in bank and office interiors and also the lakeside warehouse of the Eau Claire Ice Company (5). Each winter during the annual ice harvest employees of the ice company, owned by John Kelly, cut slabs of ice from the lake and loaded them onto a conveyor belt to be stored in sawdust in the ice houses. Ice deliveries to Eau Claire homes and businesses were made until the 1950's.

Sponsored by: The Jeffery and Helen Benrud Family


The marker is located along the Chippewa River State Trail and is easily accessible from the parking lot of a skate park located on southbound 9th Avenue, south of its intersection with Broadway Street, Eau  Claire, Wisconsin 54703.

This marker is No. 16 in a series of markers erected by the Eau Claire Landmarks Commission. 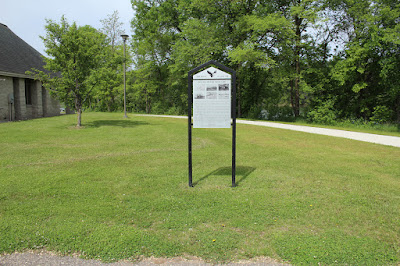 The marker is visible in the distance, to the right.