Immigrants are pouring in...land I would never have thought of choosing is being taken up." Writing from Chippewa County's Clear Water post office in 1855, Thomas Barland could scarcely have imagined the tide of immigrants yet to land in Eau Claire. As the lumber frontier shifted from New England to the Great Lakes states, Yankees and Canadians chased high wages in logging camps and sawmills. Europeans soon followed. Germans shunned political repression at home. Irish potato farmers fled famine. Norwegians dreamed of owning land.

They came by stage and steamboat, laboring in Eau Claire's sawmills until they could buy land to farm or go into business themselves. Settling near fellow countrymen, immigrants sent back passage money so that relatives and friends could join them. By 1885, Brittons, Fitzpatricks, Olsons, and Dusendofers shared a city of more than 20,000. Norwegians worshiped at First Lutheran. Irish Catholics attended St. Patrick's. Eau Claire was transformed from a sleepy river stopping place to a community of many languages and cultures. In 1890, seven out of every ten residents of the Chippewa Valley had either been born outside the United States or had foreign-born parents.

The maker is located along the Chippewa River State Trail, adjacent to a parking lot for a children's playground in Owen Park, on westbound 1st Avenue, at its T-intersection with Hudson Street, Eau Claire, Wisconsin 54703.


The marker is No. 9 in a series of markers erected by the Eau Claire Landmarks Commission. 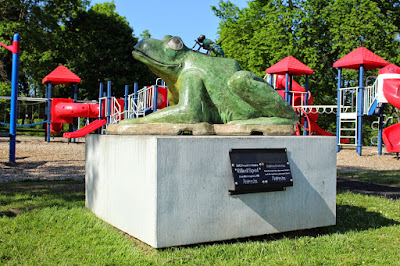 Park facing this frog; the marker will be about 100 yards to your right,
along the Chippewa River State Trail.