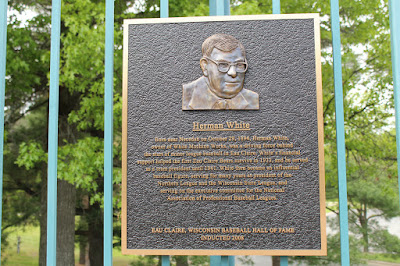 Born near Necedah on October 29, 1894, Herman White,
owner of White Machine Works, was a driving force behind
the start of minor league baseball in Eau Claire. White's financial
support helped the first Eau Claire Bears survive in 1933, and he served
as a team president until 1941. White them became an influential
baseball figure, serving for many years as president of the
Northern League and the Wisconsin State League, and
serving on the executive committee for the National
Association of Professional Baseball Leagues.

Herman White's marker is sixth from the right.