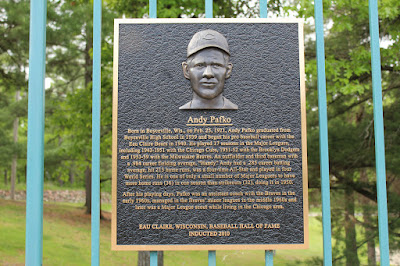 Born in Boyceville, Wis., on Feb. 25, 1921, Andy Pafko graduated from Boyceville High School in 1939 and began his pro baseball career with the Eau Claire Bears in 1940. He played 17 seasons with the Major Leagues, including 1943-1951 with the Chicago Cubs, 1951-52 with the Brooklyn Dodgers, and 1953-59 with the Milwaukee Braves. An outfielder and third baseman with a .984 career fielding average, "Handy" Andy had a .285 career batting average, hit 21 home runs, was a four-time All-Star and played in four World Series. He is one of only a small number of Major Leaguers to have more home runs (36) in one season than strikeouts (32), doing it in 1950.

After his playing days, Pafko was an assistant coach with the Braves in the early 1960s, managed the Braves' minor leagues in the middle 1960s and later was a Major League scout while living in the Chicago area.

Andy Pafko's marker is second from the left.