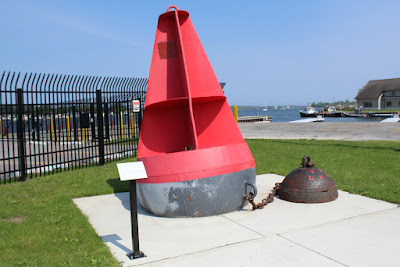 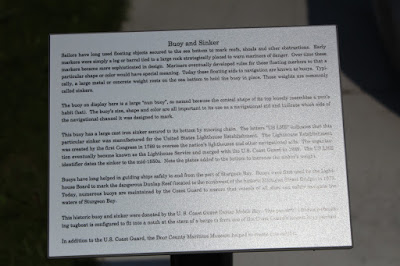 Sailors have long used floating objects secured to the sea bottom to mark reefs, shoals and other obstructions. Early markers were simply a log or barrel tied to a large rock strategically placed to warn mariners of danger. Over time these markers became more sophisticated in design. Mariners eventually developed rules for these floating markers so that a particular shape or color would have special meaning. Today these floating aids to navigation are known as buoys. Typically, a large metal or concrete weight rests on the sea bottom to hold the buoy in place. These weights are commonly called sinkers.

The buoy on display here is a large "nun buoy", so named because the conical shape of its top loosely resembles a nun's habit (hat). The buoy's size, shape and color are all important to its use as a navigational aid and indicate which side of the navigational channel it was designed to mark.

This buoy has a large cast iron sinker secured to its bottom by mooring chain. The letters 'US LHE" indicates [sic] that this particular sinker was manufactured for the United States Lighthouse Establishment. The Lighthouse Establishment was created by the first Congress in 1789 to oversee the nation's lighthouses and other navigational aids. The organization eventually became known as the Lighthouse Service and merged with the U.S. Coast Guard in 1989. The US LHE identifier dates the sinker to the mid-1850s. Note the plates added to the bottom to increase the sinker's weight.

Buoys have long helped in guiding ships safely to and from the port of Sturgeon Bay. Buoys were first used by the Lighthouse Board to mark the dangerous Dunlap Reef (located to the northwest of the historical Michigan Street Bridge) in 1873. Today, numerous buoys are maintained by the Coast Guard to ensure that vessels of all sizes can safely navigate the waters of Sturgeon Bay.

This historic buoy and sinker were donated by the U.S. Coast Guard Cutter Mobile Bay. This [illegible] ing tugboat is configured to fit into a notch at the stern of a barge to form one of the Coast Guard's longest [illegible]

In addition to the U.S. Coast Guard, the Door County Maritime Museum helped to create this exhibit.

The marker is located at Sawyer Park on South Neenah Avenue, south of its intersection with Oregon Street, Sturgeon Bay, Wisconsin 54235. 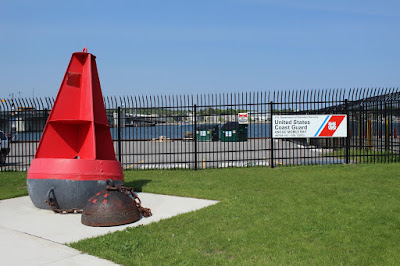 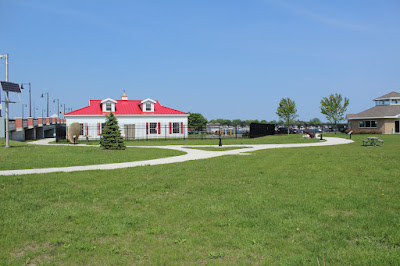 The Buoy and Singer are behind the gazebo to the far right. 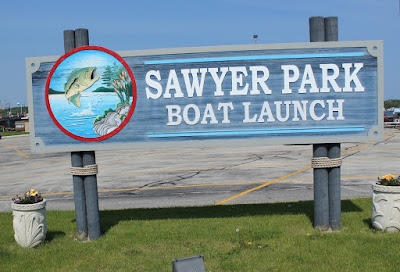 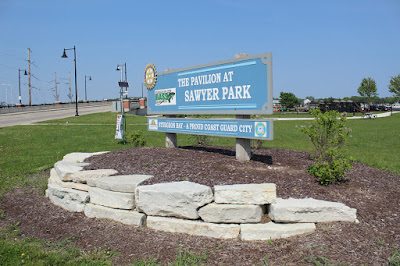