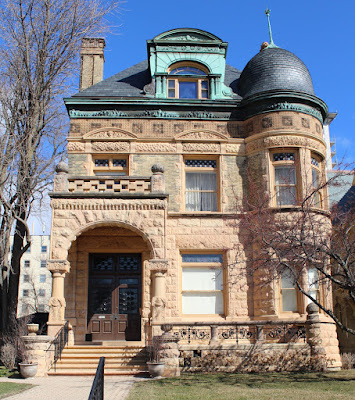 The property located within the First Ward Triangle Historic District, listed on the National Register of Historic Places: Wisconsin.

"The Miller House is one of Milwaukee's finest Victorian residences. It incorporates Queen Anne and Romanesque motifs in the design. The design of the house is attributed to August Fiedler of Chicago. It is a two and one half story asymetrical block with a steeply pitched slate hip roof. At the southeast corner is a two-story engaged round tower with a bell cast roof covered with slate. The exterior finish is a combination of pink rock-faced Abelman quartzite on the first floor, Milwaukee pressed brick on the second floor and an elaborate cornice of carved stone, tile inserts and stamped copper sheet metal. The structure has numerous fine stained glass windows, abundant iron and brass grillwork and highly decorated Queen Anne style chimneys. The windows are mostly single-light, double-hung sash with transoms. Of particular note is the Tiffany style glasswork in the interior which includes a magnolia window over the fireplace in the library and floral windows on the stair landings. This glasswork was probably installed sometime between 1895 and 1900. The house has been little altered. Fire insurance maps indicate that a first floor side porch on the east elevation between the tower and the bay was removed about 1890 although the second floor balcony above it remains today. A comparison of the present structure with an 1891 lithograph revealed no major alterations. A small garage was added to the west elevation in 1964."

Individuals associated with this building include George P. and Laura Chapman Miller (1887 to 1960), and Miss Laura Isabelle Miller (1960 to 1982). George P. Miller was a prominent local attorney.


The First Ward Triangle Historic Designation Study Report states, "This residence was built as a wedding gift by Timothy A. Chapman for his daughter Laura and son-in-law, George P. Miller. Chapman was a pioneer businessman and civic leader who founded the T.A. Chapman Company in 1857. It was Milwaukee’s oldest, continuous full line department store until it closed in 1981. George Peckham Miller was a Milwaukee native born in 1858. His father was prominent Milwaukee attorney, Benjamin K. Miller and his mother was Isabelle Peckham whose father, George Peckham was a noted educator and public school official. 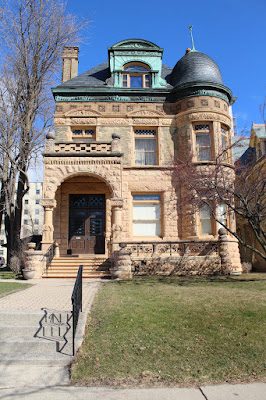 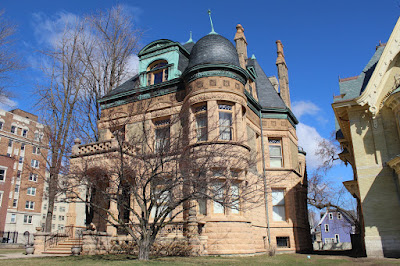 This house is absolutely breathtaking! 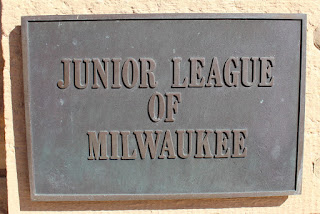 The property is now home to the Junior League of Milwaukee.