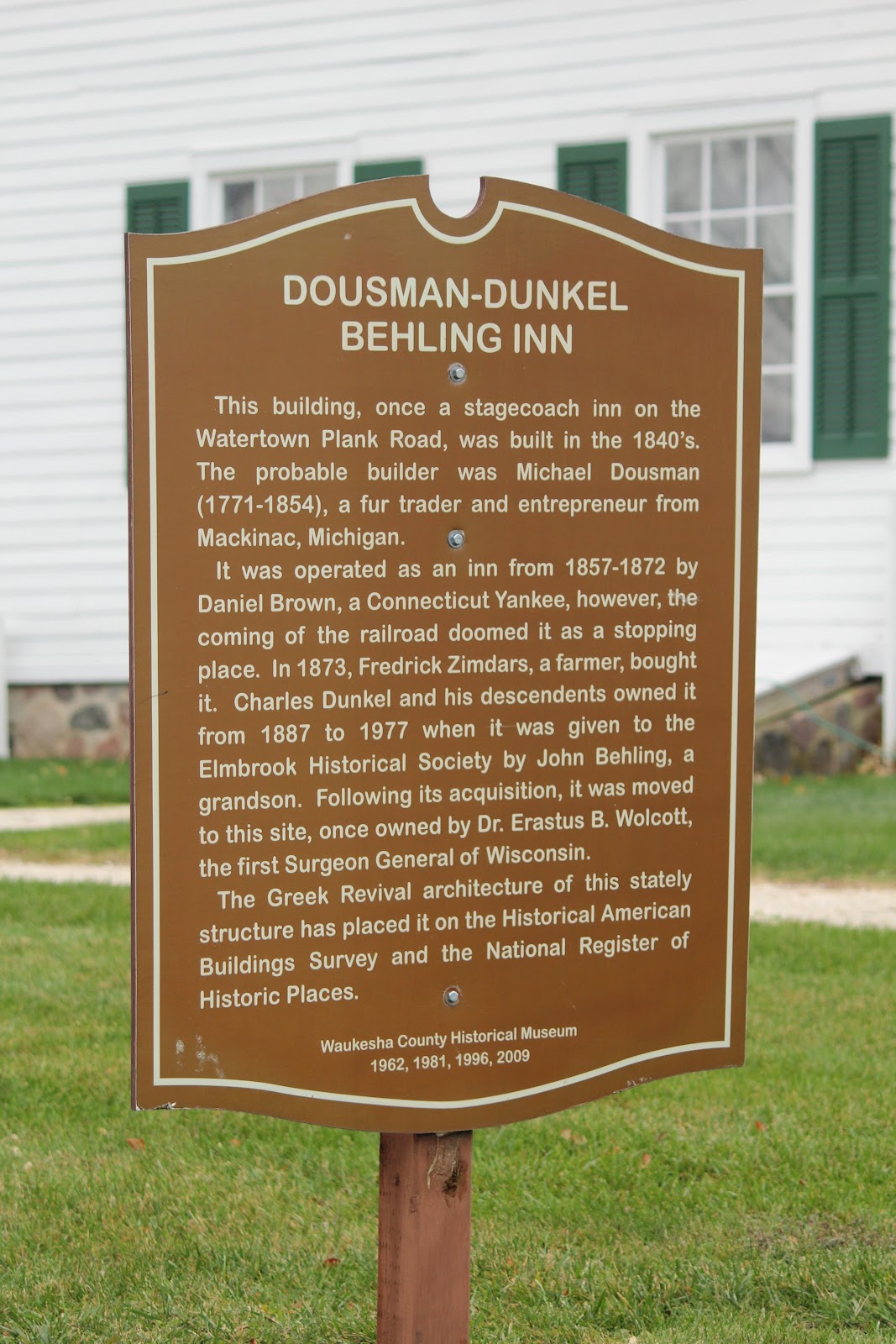 This building, once a stagecoach inn on the Watertown Plank Road, was built in the 1840’s. The probable builder was Michael Dousman (1771-1854), a fur trader and entrepreneur from Mackinac, Michigan.

It was operated as an inn from 1857-1872 by Daniel Brown, a Connecticut Yankee, however, the coming of the railroad doomed it as a stopping place. In 1873, Fredrick Zimdars, a farmer, bought it. Charles Dunkel and his descendants owned it from 1887 to 1977 when it was given to the Elmbrook Historical Society by John Behling, a grandson. Following its acquisition, it was moved to this site, once owned by Dr. Erastus B. Wolcott, the first Surgeon General of Wisconsin.

The Greek Revival architecture of this stately structure has placed it on the Historical American Buildings Survey and the National Register of Historic Places.

The marker and Inn are located at Dousman Stagecoach Inn Museum on southbound Pilgrim Parkway, about a half mile south of its intersection with Gebhardt Road, at 1075 Pilgrim Parkway, Brookfield, Wisconsin 53005.

This marker is No. 02-04 in a series of historical markers erected by the Waukesha County Historical Society. 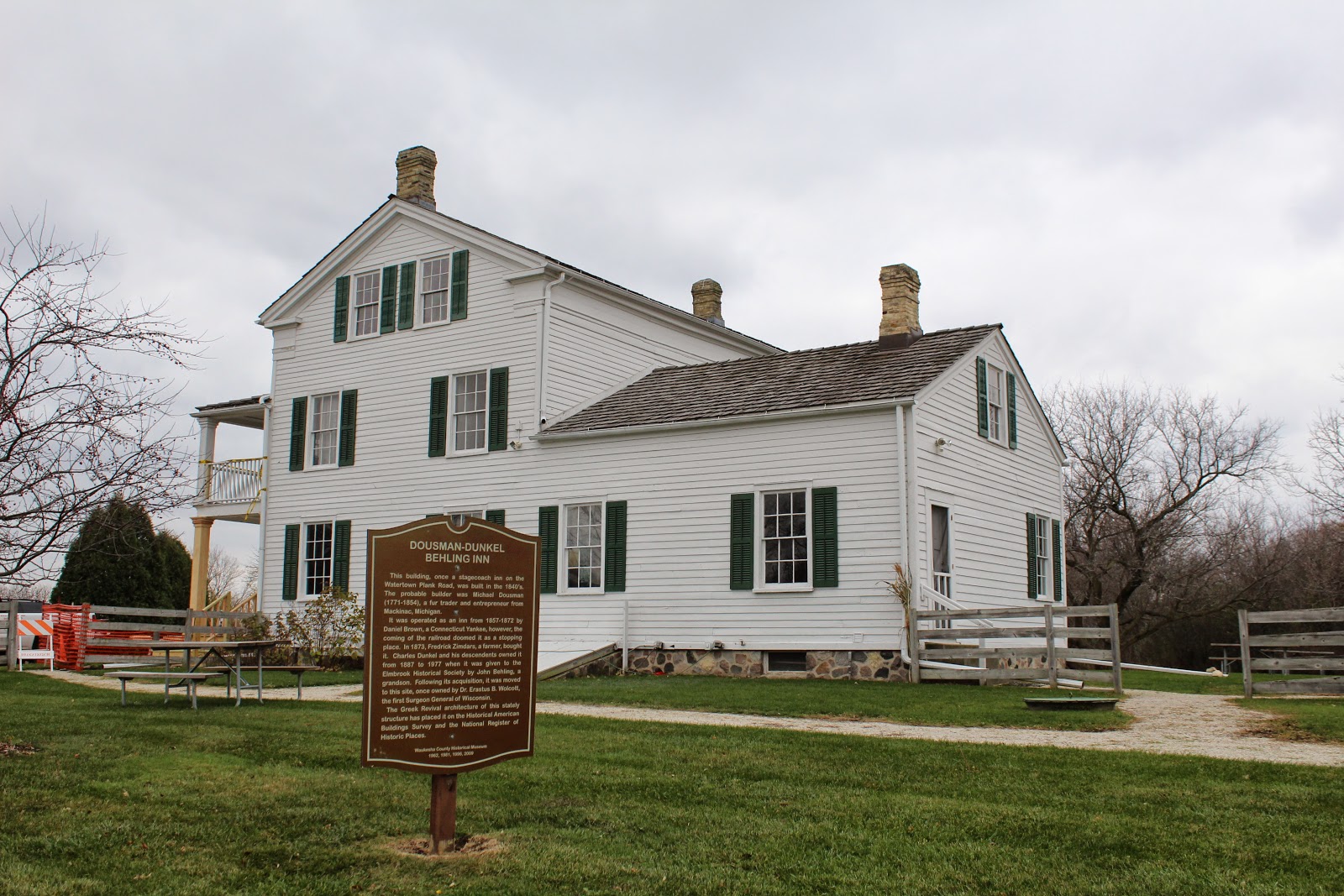 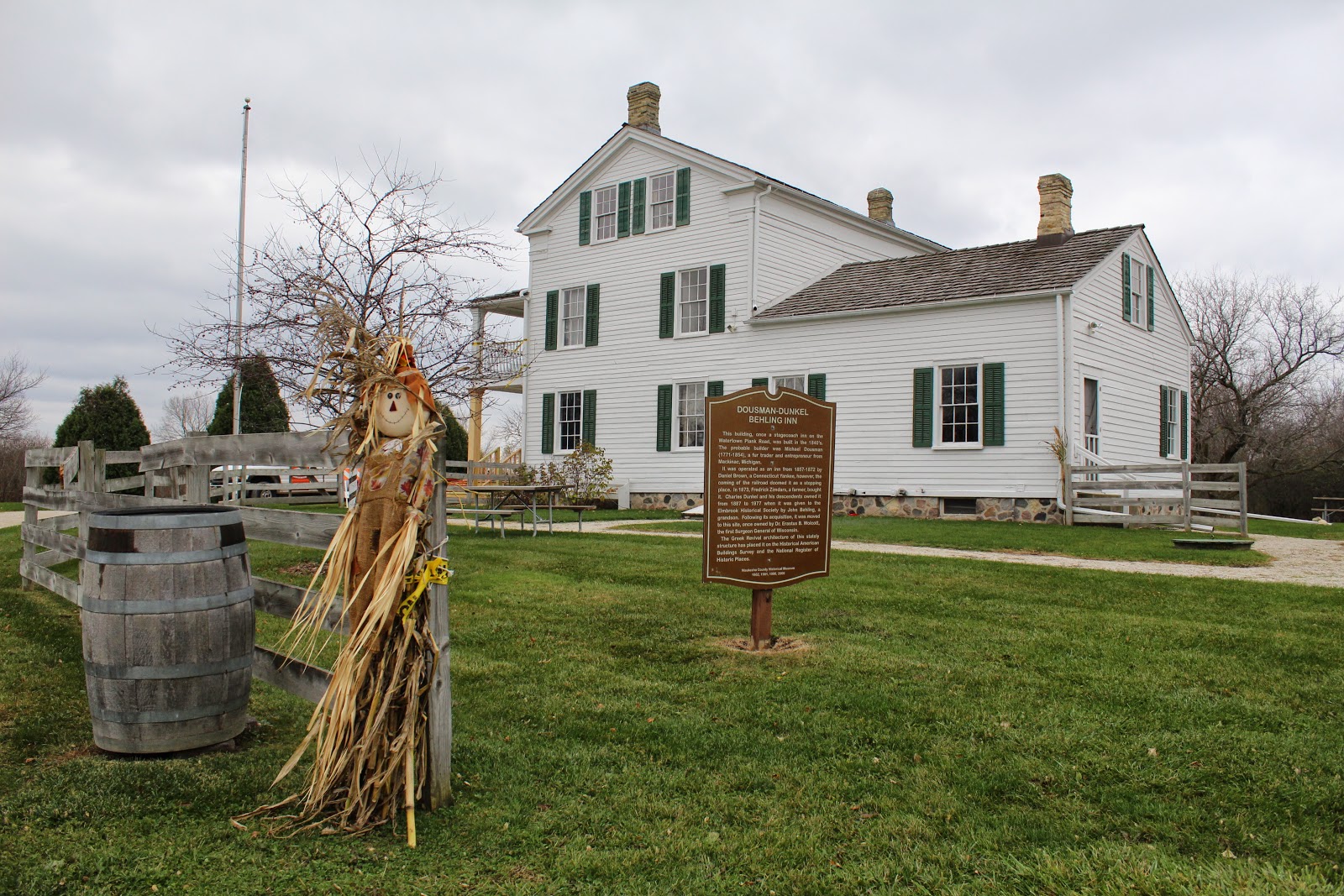 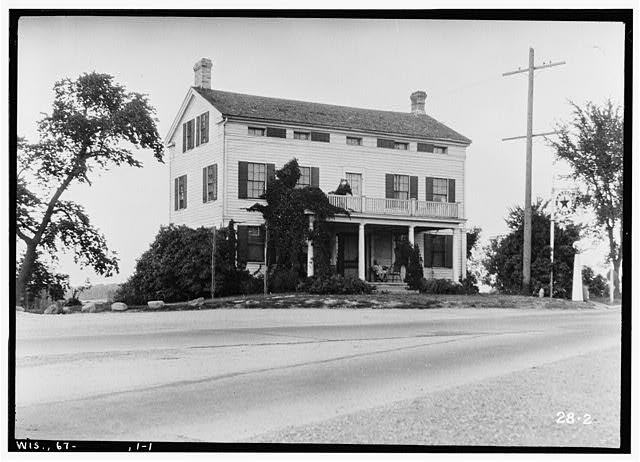 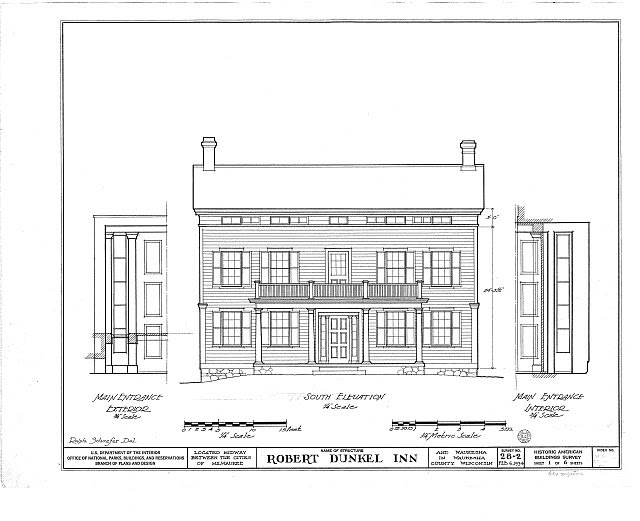 On the main highway (the Bluemound Road) leading out of Milwaukee to the west stands the Robert Dunkel Inn. In the days of the early stage coach lines its situation was about half way between the City of Milwaukee and what was then Prairieville. This latter city is known today as Waukesha. the Inn is still standing on its original site and has been converted into a dwelling.  Built early 1840's, there it is today in all its beauty and charm, a relic of the bygone days of vehicular travel, when the iron horse had not generally put in its appearance. Its colonial lines and dimensions identify it to even the casual observer.

As the "half way house" between Milwaukee and Prairieville (a day's trip apart in days gone by), it was the popular stopping place for travellers between these two cities. Though no records exist today, many stories about the popularity of this Inn are related by old settlers still residing in the vicinity. Here stopped many a lawmaker on his way to and from the seat of the state government at Madison. Carl Schurz, the eminent statesman, who, after he left this state, became a member of President Hayes' cabinet, is said to have stopped here frequently on his way to and from Watertown, where he made his first home in the country of his adoption.

The Inn is a three story structure. The arrangement remains intact today. The first floor contains an ample hall, a tap room, a second public room, an oversize dining room and a kitchen. The second floor contains a myriad of smaller rooms used as sleeping compartments. But "nary not" a bath or wash room. And the top floor is taken up with a spacious ballroom.

The construction of the building is typical of the day when it was erected. In each corner may be seen posts projecting into the rooms. These tell the story of the sturdy uprights which were first placed in the construction. All of the girders in the basement for the support of the main portion of the structure are black walnut. They shot plainly that they were squared with an adze. The joists are oak. Many rooms contain the original floors which also she the marks of the adze. With but two small chimneys, heating all of the rooms, especially those on the second and third floors, must have presented "some" problem.

The details at the doorway and of the interior in general all bespeak of much refinement and restraint. The mutins at the windows are so tiny that it is a wonder how they ever withstood the ravages of the elements. The mouldings are free-flowing and most interesting, and are all hand-cut. The entire house has all the earmarks of the better Colonial work found in the seaboard towns. This leads one to believe that it is the work of a craftsman who was trained in the eastern states and then immigrated west to the new northwest, where he pursued his craft as he did in his original home state.

The date of the building is approximated as the early 1840's. 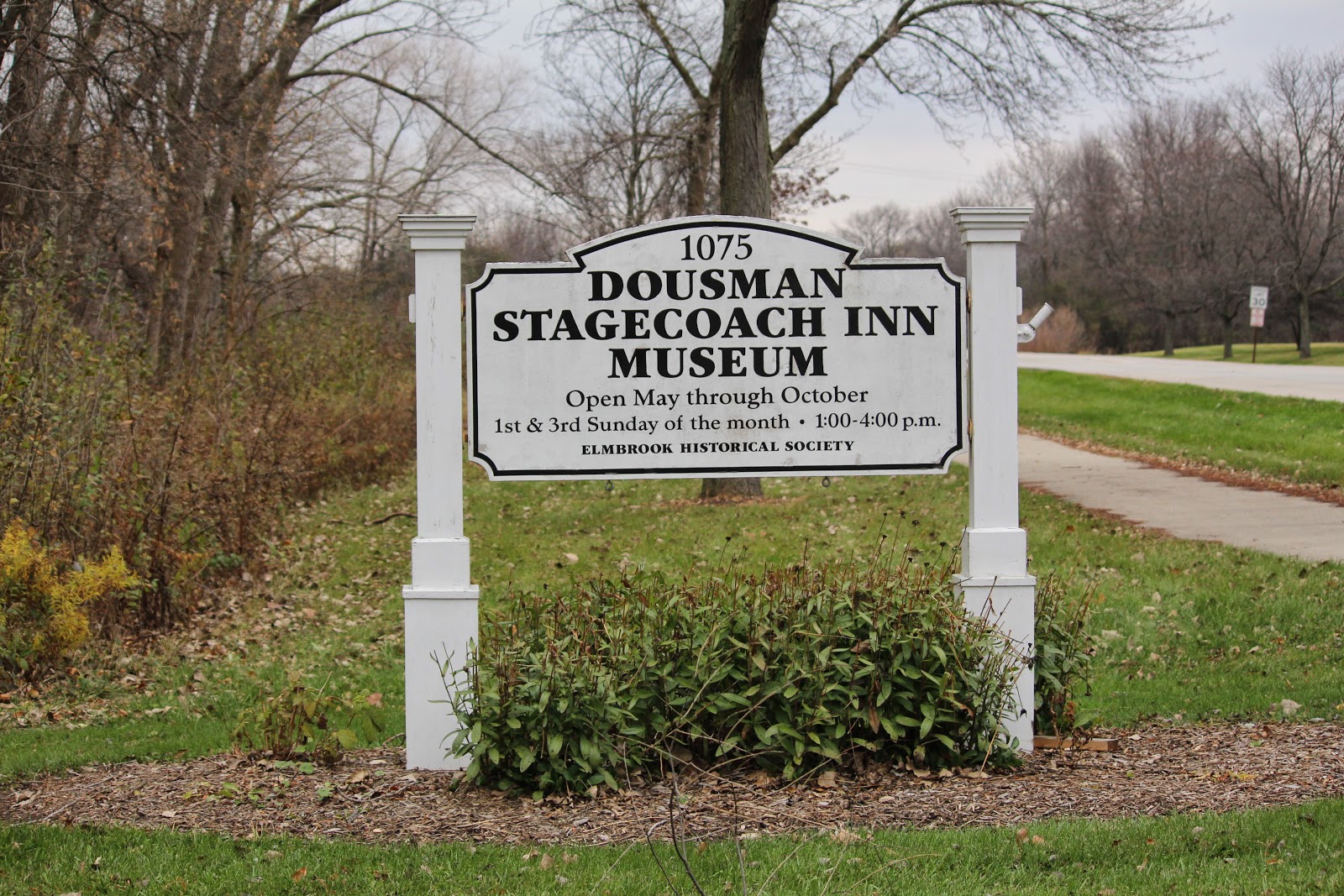 The building has been relocated and is on the grounds of
the Dousman Stagecoach Inn Museum.

This inn was built by the Dousman family at the historic intersection of the Blue Mound Military Road and the Watertown Plank Road, both important arteries of migration into the interior of Wisconsin. During the heyday of the Inn, a major portion of American westward migration followed the Great Lakes route, disembarking at Milwaukee and Chicago. The Dousman Inn, situated a half-days travel west of Milwaukee became, in the 1840s and 1850s, an important stopping place.
The Inn was constructed on the north side of the military road in the 1840s. A flurry of land transactions in 1843, when the Inn site changed hands twice and the value of the property incresed to $1,500, suggests that the Inn was built in that year. Local tradition has it that Michael Dousman owned the Inn until his death in 1854. A prominent businessman, he lived in Mackinack, but speculated extensively in real estate and development schemes in Wisconsin and Milwaukee in particular. The farm and Inn in Brookfield represented only a fraction of Dousman's enterprises in the Milwaukee area, and he visited the city at frequent intervals. His sons George D., Talbot C., and Hercules L., became influential figures in the development of Wisconsin. It is unknown whether any of the Dousmans actually resided in or operated the Inn.
After Michael Dousman's death, the Dousman heirs sold the Inn and the adjoining Dousman farm to Daniel Brown, a Yankee who had come to Brookfield several years before. Brown worked the farm and opeated the Inn, which has known locally as The Dousman. Along the road passed large numbers of the immigrants who would people the interior of Wisconsin, many of them stopping for rest, refreshment and conviviality at Brown's inn. Nevertheless, the glory days of the inn would be short, for even during Brown's purchase, the Milwaukee and Waterown Railroad was rendering the difficult-to maintain Watertown Plank Road obsolete.
By the time that Brown sold the inn to Frederick Zimdar in 1873, railroads had long since supplanted toll roads like the Watertown Plank Road as primary transportation arteries. The many deed and mortgages pertaining to this ownership tell the frustrated tale of Zimdar's vain attempts, over fourteen years, to gain clear title to the property. In 1884, Zimdar's son conveyed the property to Charles Dunkel. Dunkel converted the inn to a farmhouse but frequently held dances and other social events in the third-floor ballroom. John Behling, Dunkel's grandson, was the last resident of the house, selling it in 1980. Scheduled for demolition, the Inn was saved by the newly-formed Elmbrook Historical Society, and moved four-tenths of a mile north on Pilgrim Parkway to its present location.