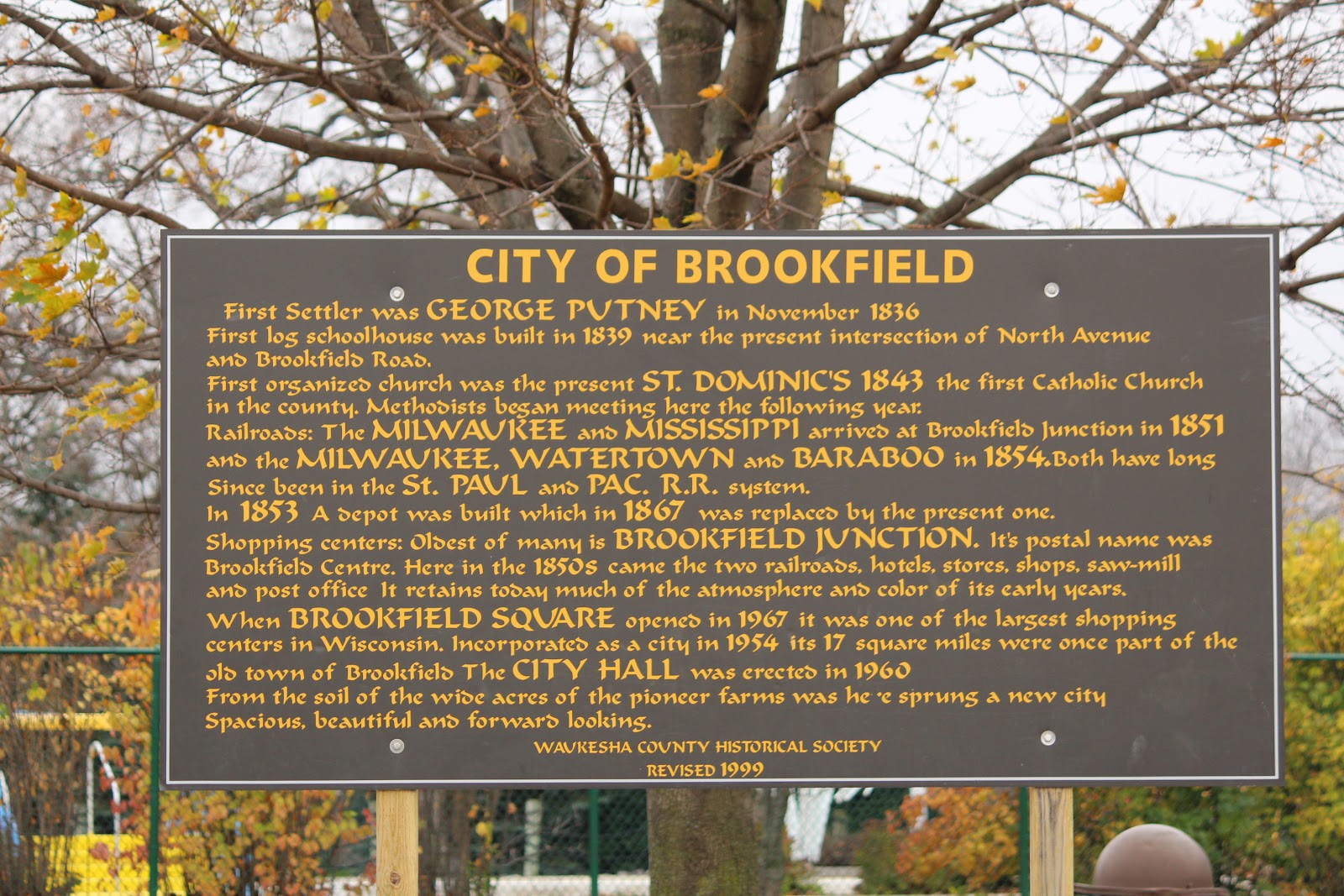 First Settler was George Putney in November 1836. First log schoolhouse was built in 1839 near the present intersection of North Avenue and Brookfield Road.

Railroads: The Milwaukee and Mississippi arrived at Brookfield Junction in 1851 and the Milwaukee, Watertown and Baraboo in 1854. Both have long since been in the St. Paul and Pac. R.R. system. In 1853 a depot was built which in 1867 was replaced by the present one.

Shopping centers: Oldest of many is Brookfield Junction. It’s [sic] postal name was Brookfield Centre. Here in the 1850s came the two railroads, hotels, stores, shops, sawmill and post office. It retains today much of the atmosphere and color of its early years.

When Brookfield Square opened in 1967 it was one of the largest shopping centers in Wisconsin. Incorporated as a city in 1954 [sic] its 17 square miles were once part of the old Town of Brookfield. The City Hall was erected in 1960.

The marker is located inside Wirth Park, adjacent to a parking lot for the Wiberg Acquatic Center. The entrance to the park is located on southbound Pilgram Road / County Road YY, south of its intersection with Pomona Road, and just south of the railroad track, at 2585 Pilgrim Road, Brookfield, Wisconsin 53005.

City of Brookfield: History
The history of Brookfield begins with the Native American Sac and Potawatomi tribes, and was ruled by the French until the British took over in 1763 . . .

This marker is No. 02-03 in a series of historical markers erected by the Waukesha County Historical Society. 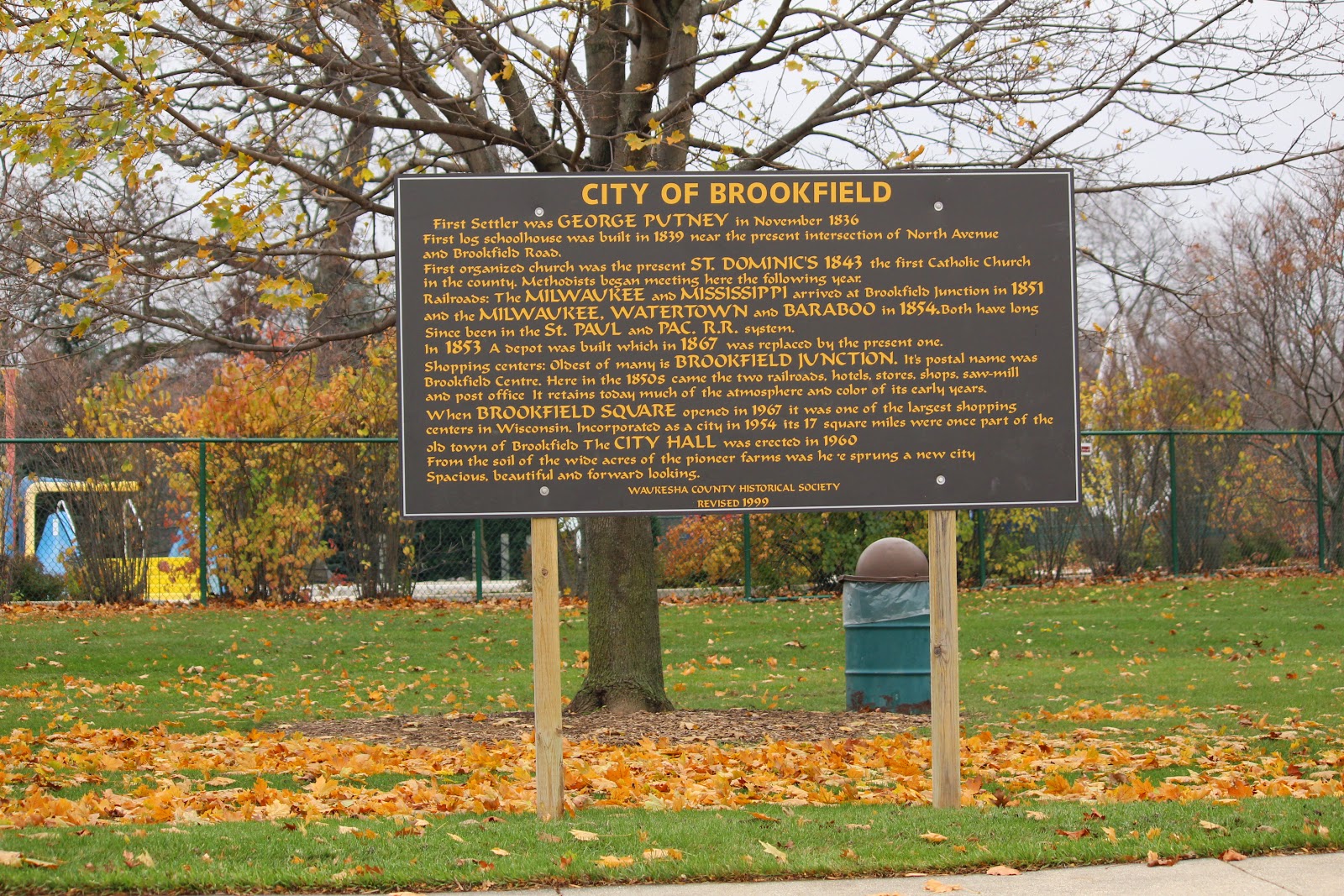 With the Wiberg Acquatic Center in the background. 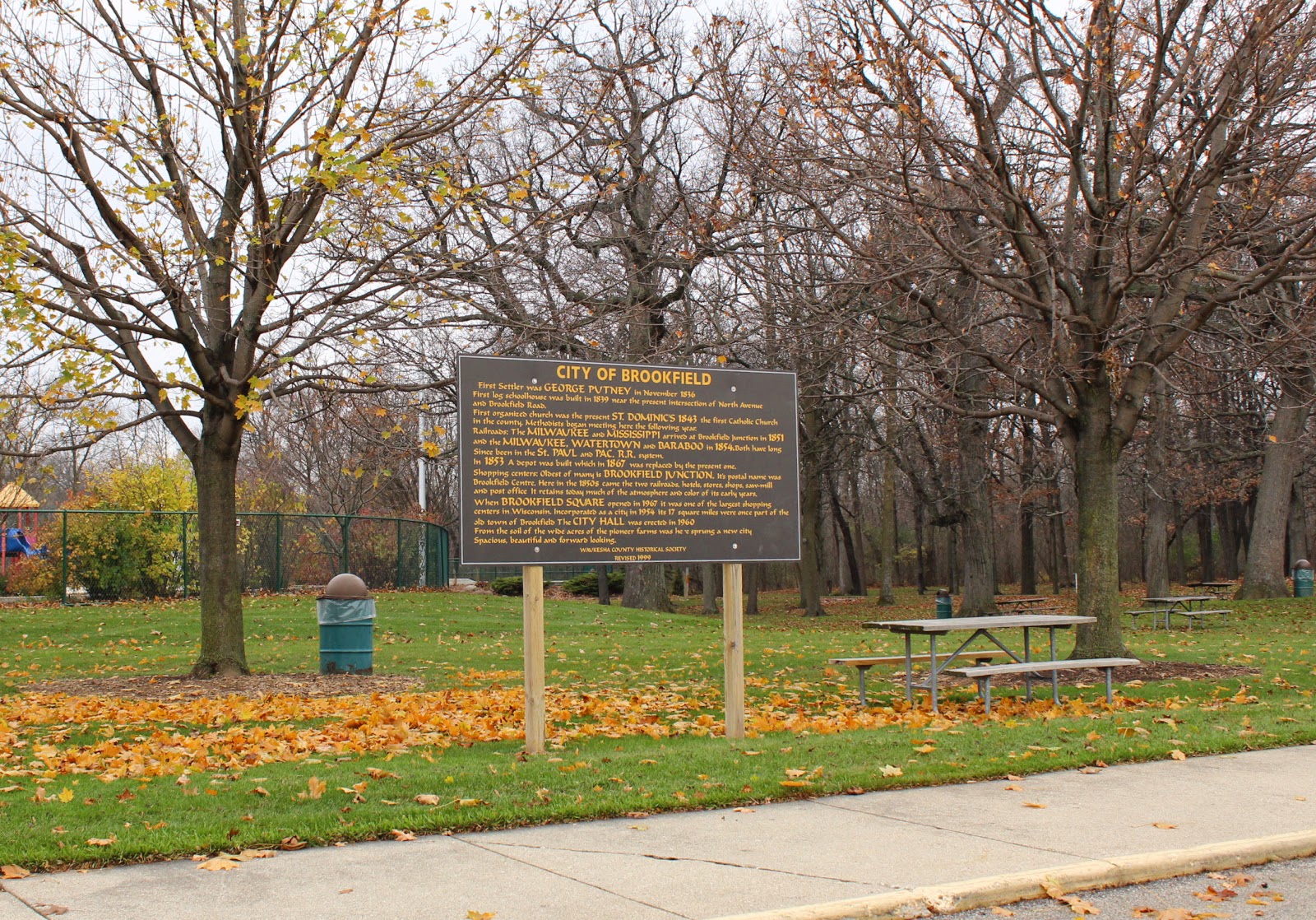 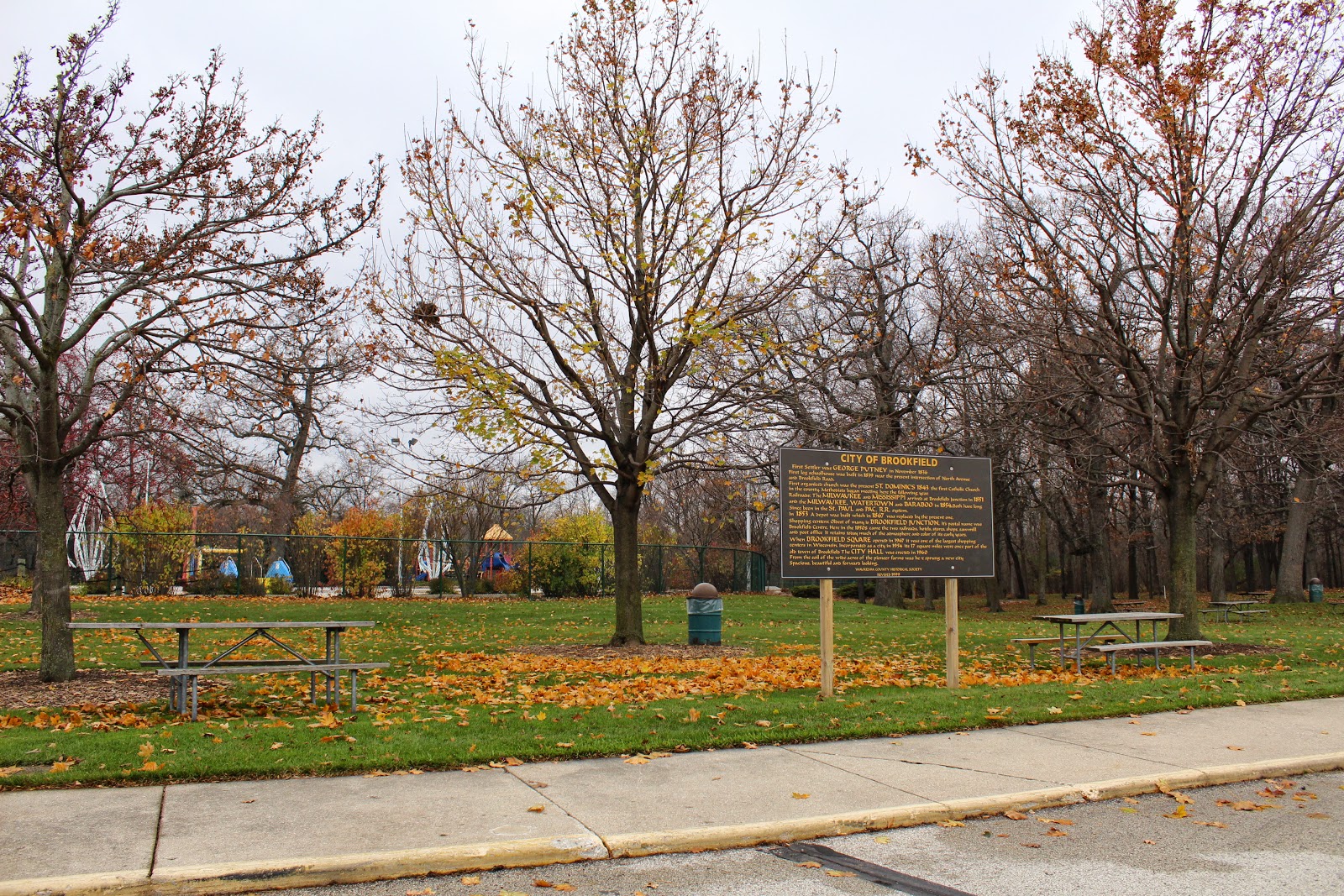 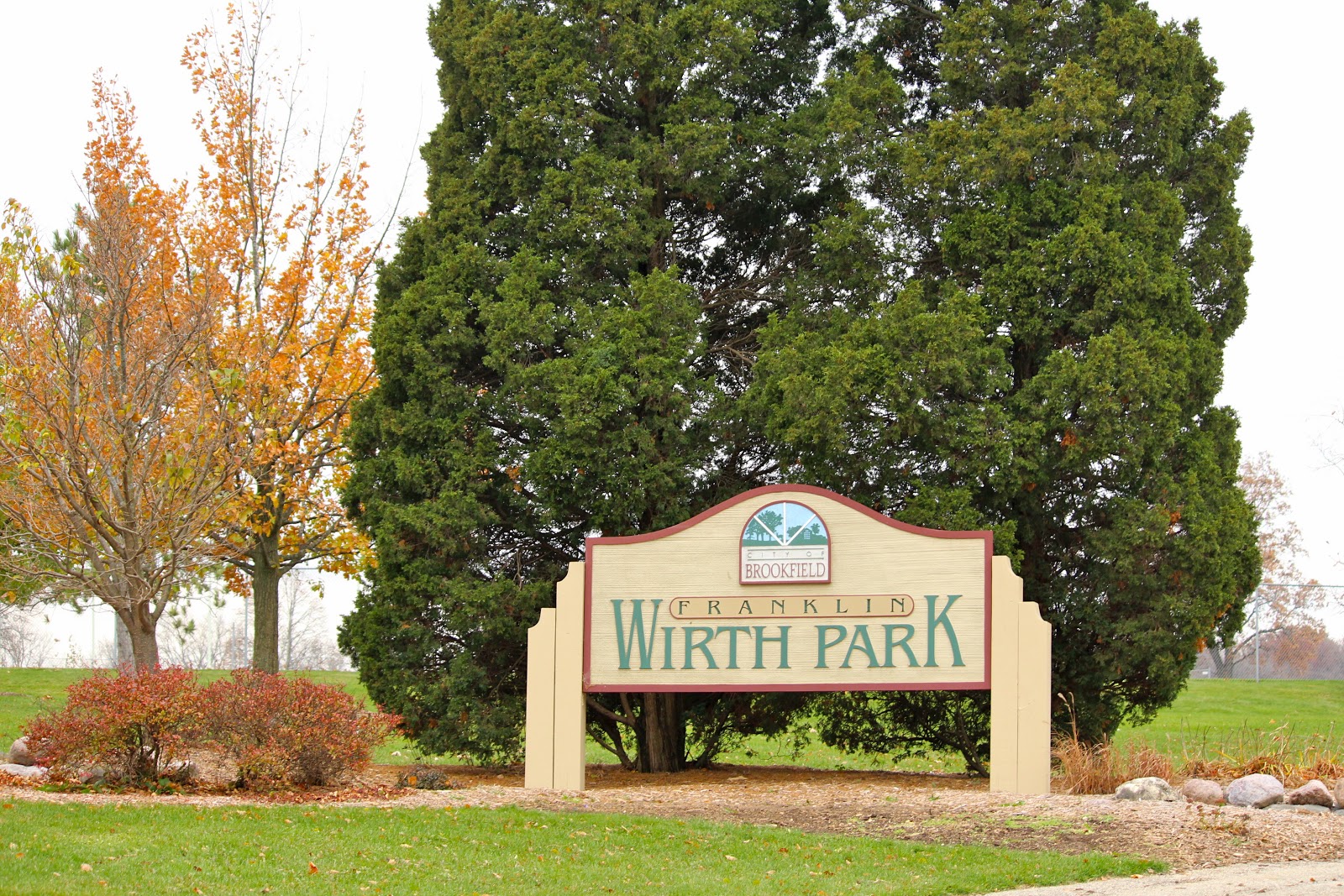 The marker is located inside Wirth Park.