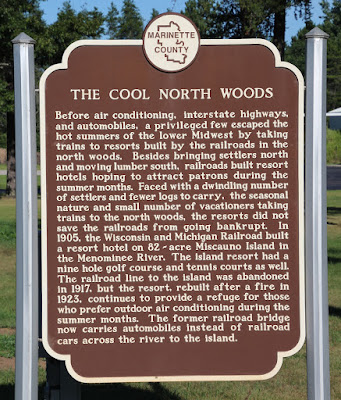 Before air conditioning, interstate highways, and automobiles, a privileged few escaped the hot summers of the lower Midwest by taking trains to resorts built by the railroads in the north woods. Besides bringing settlers north and moving lumber south, railroads built resort hotels hoping to attract patrons during the summer months. Faced with a dwindling number of settlers and fewer logs to carry, the seasonal nature and small number of vacationers taking trains to the north woods, the resorts did not save the railroads from going bankrupt. In 1905, the Wisconsin and Michigan Railroad built a resort hotel on 82-acre Miscauno Island in the Menominee River. The island resort had a nine hole golf course and tennis courts as well. The railroad line to the island was abandoned in 1917, but the resort, rebuilt after the fire in 1923, continues to provide a refuge for those who prefer outdoor air conditioning during the summer months. The former railroad bridge now carries automobiles instead of railroad cars across the river to the island.

The memorial is located at a small park at the intersection of northbound U.S. Highway 141 and eastbound County Road Z, Beecher / Pembine, Wisconsin 54146. 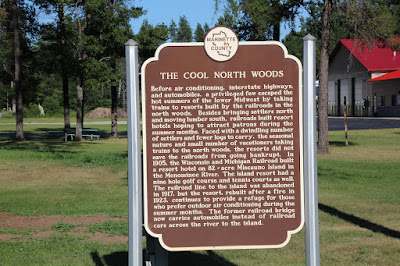 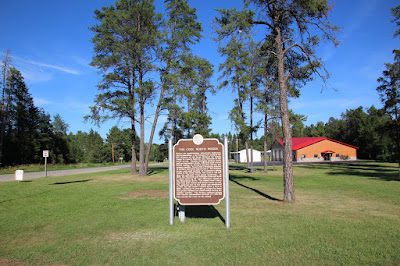 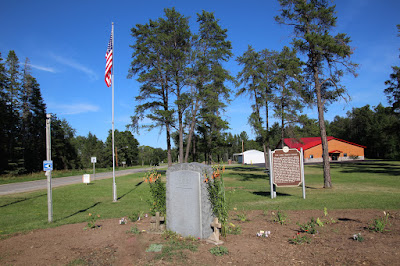 The marker faces U.S. Highway 141.
There is plenty of parking just around the corner on County Road Z.