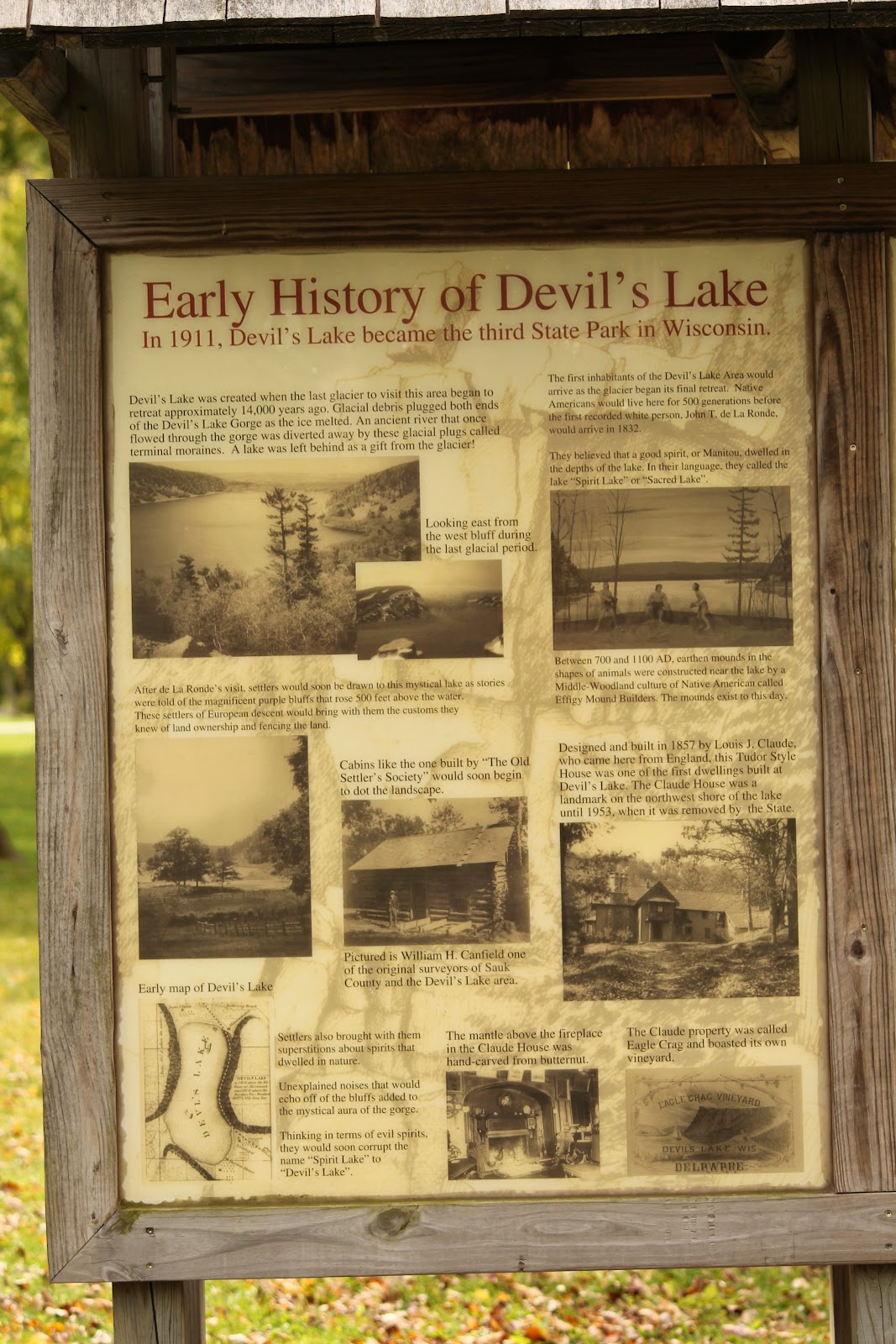 In 1911, Devil's Lake became the third State Park in Wisconsin.

NOTE: This marker is a bit tricky to locate. Follow the signs along South Park Road to Devil's Lake South Shore. Enter the South Shore area. Turn to the left and head to the furthest parking lot. Then turn right and park as close as possible to Devil's Lake. The marker is close to the water, along the Ice Age National Scenic Trail. Use the coordinates and Google Map above. 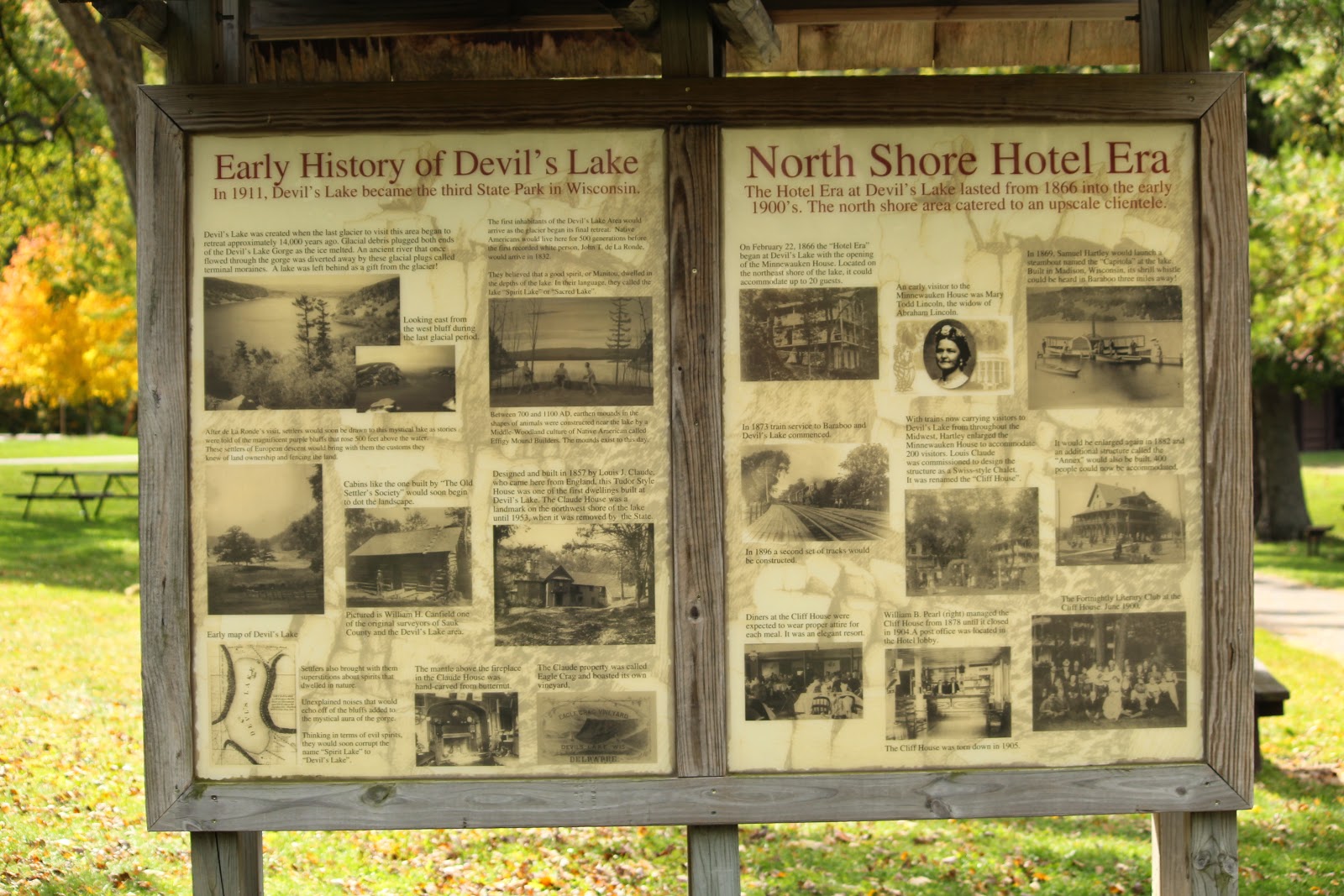 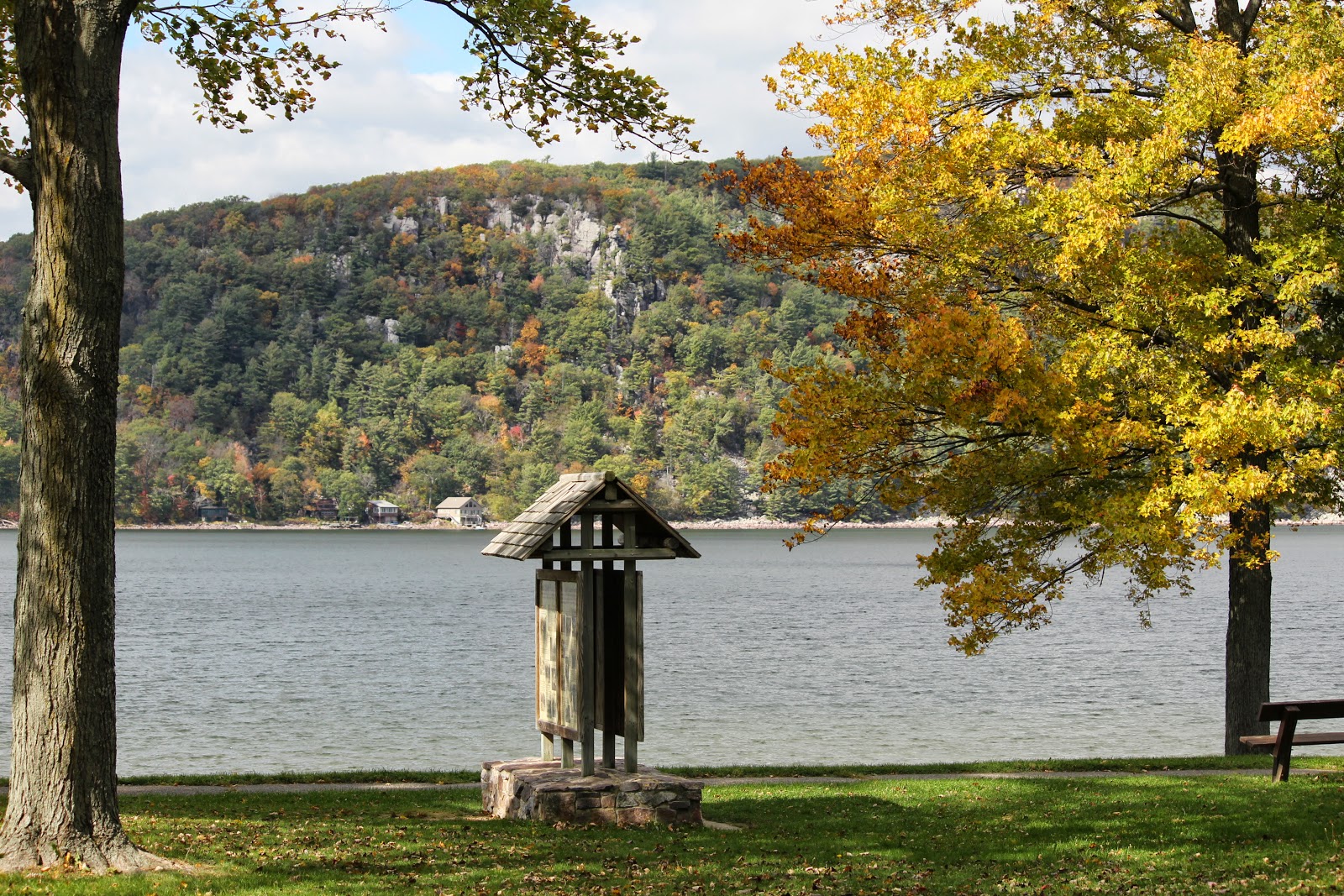 View of the marker from the parking area,
with Devil's Lake in the background. 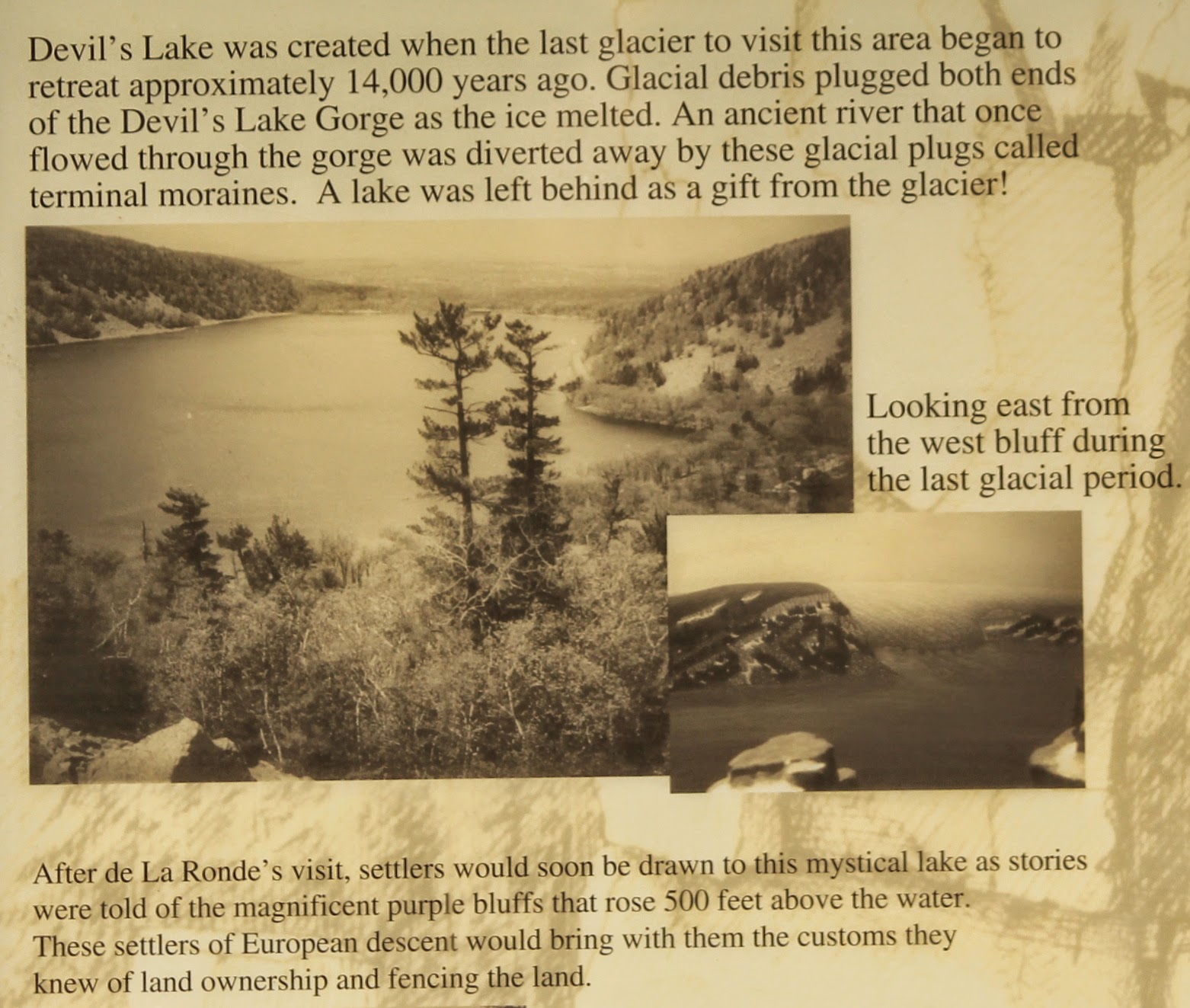 Devil's Lake was created when the last glacier to visit this area began to retreat approximately 14,000 years ago. Glacial debris plugged both ends of the Devil's Lake Gorge as the ice melted. An ancient river that once flowed through the gorge was diverted away by these glacial plugs called terminal moraines. A lake was left behind as a gift from the glacier!

After de La Ronde's visit, settlers would soon be drawn to this mystical lake as stories were told of the magnificent purple bluffs that rose 500 feet above the water. These settlers of European descent would bring with them the customs they knew of land ownership and fencing the land. 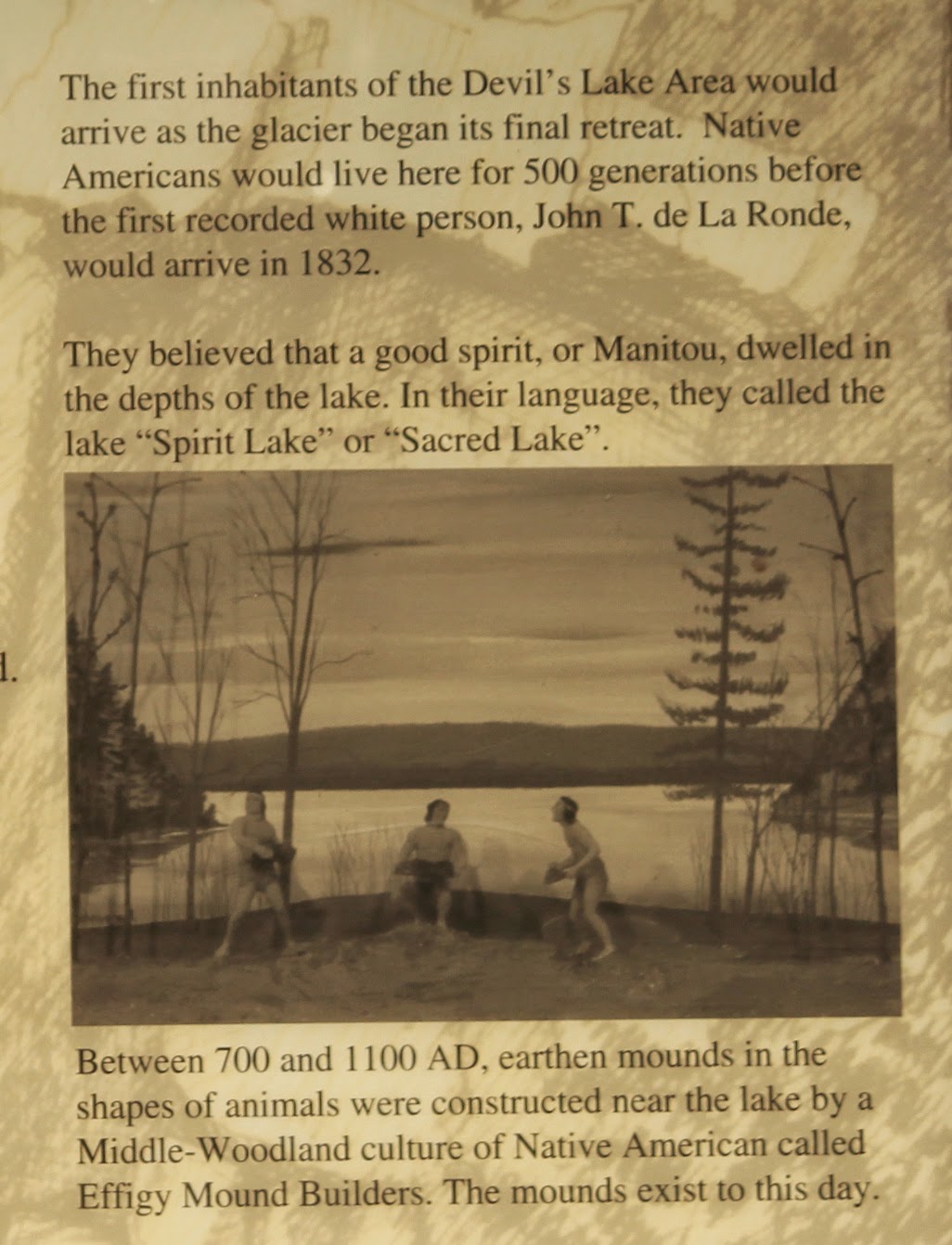 The first inhabitants of the Devil's Lake Area would arrive as the glacier began its final retreat. Native Americans would live here for 500 generations before the first recorded white person, John T. de La Ronde, would arrive in 1832.

They believed that a good spirit, or Manitou, dwelled in the depths of the lake. In their language, they called the lake "Spirit Lake" or "Sacred Lake."

Between 700 and 1100 AD, earthen mounds in the shapes of animals were constructed near the lake by a Middle-Woodland culture of Native American called Effigy Mound Builders. The mounds exist to this day. 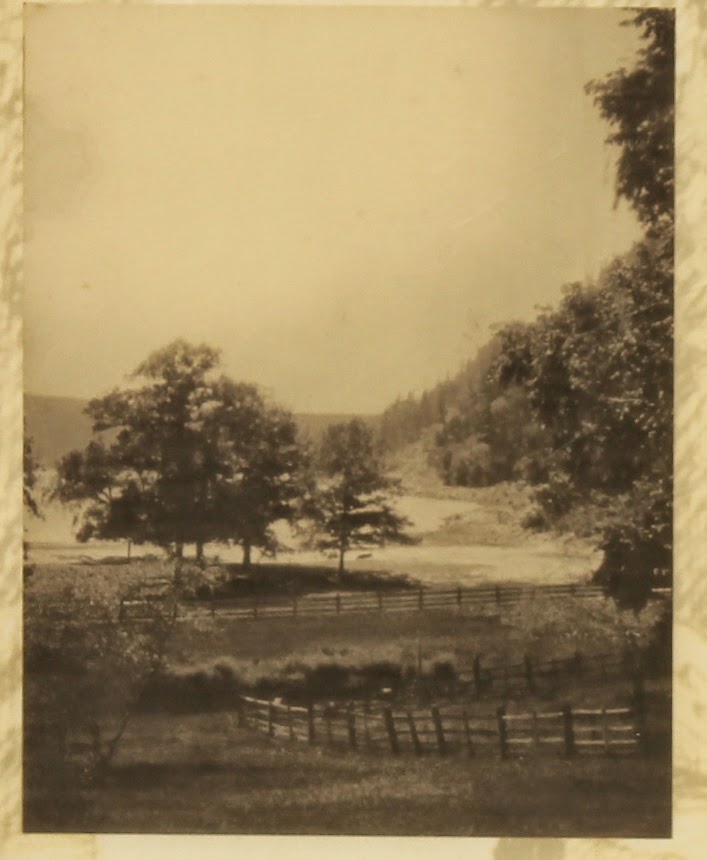 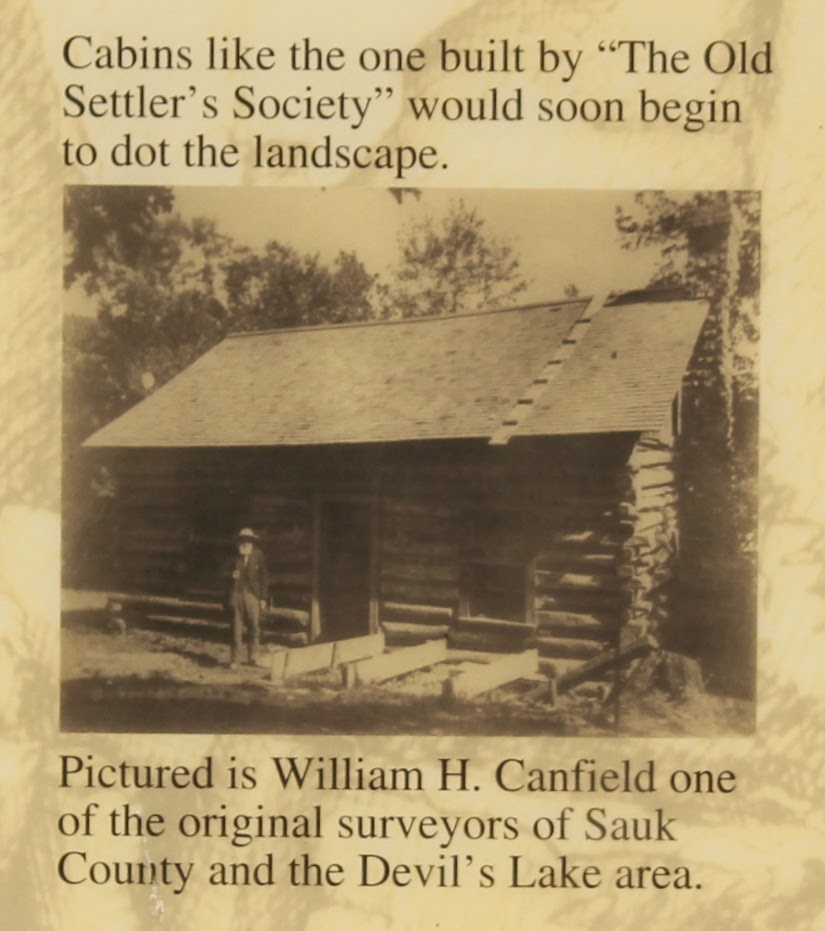 Cabins like the one built by "The Old Settler's Society" would soon begin to dot the landscape.

Pictured is William H. Canfield one of the original surveyors of Sauk County and the Devil's Lake area. 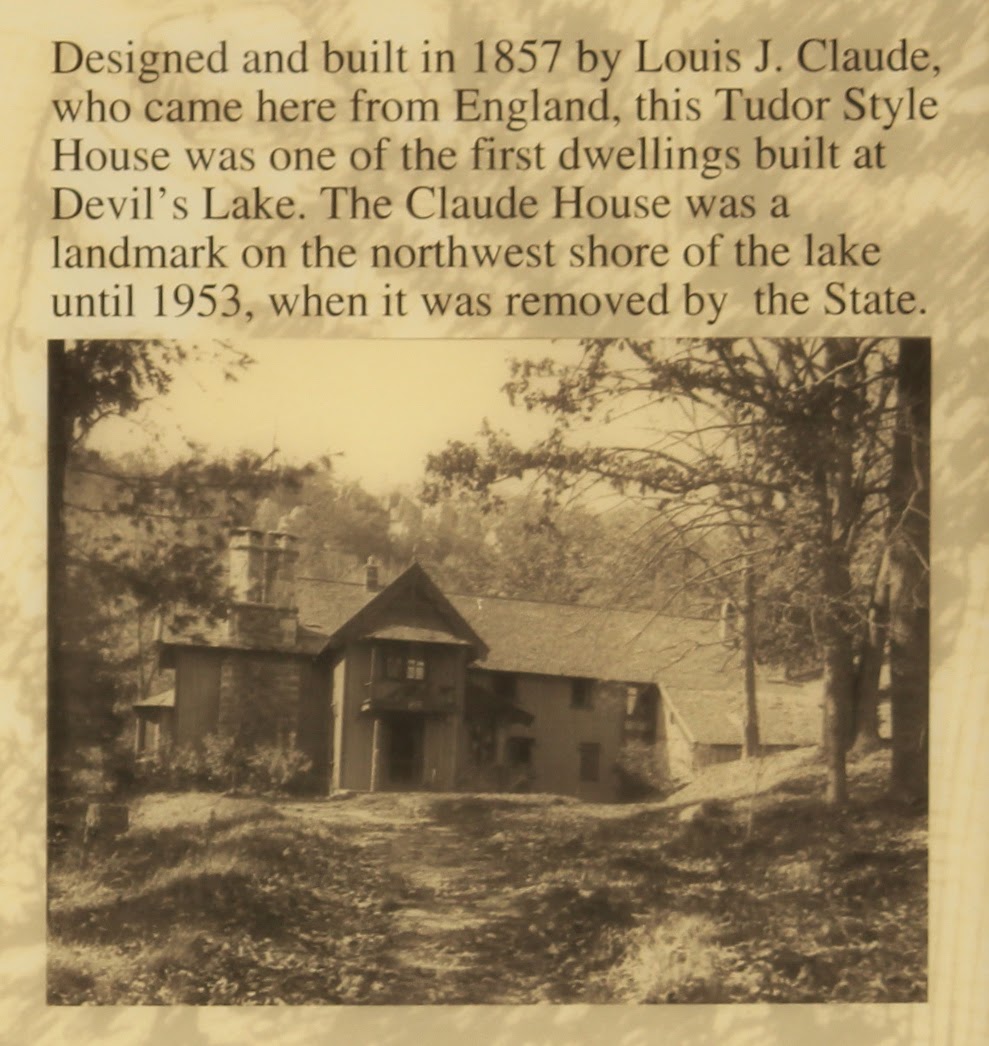 Designed and built in 1857 by Louis J. Claure, who came here from England, this Tudor Style House was one of the first dwellings built at Devil's Lake. The Claure House was a landmark on the northwest short of the lake until 1953, when it was removed by the State. 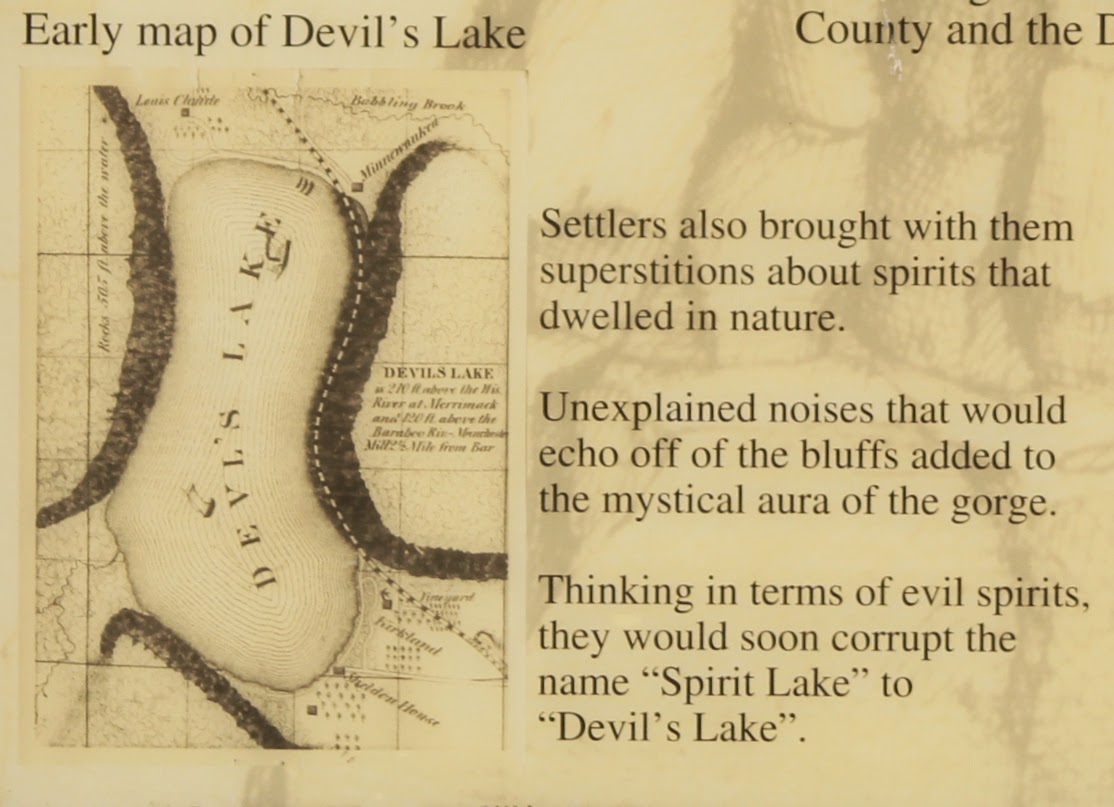 Settlers also brought with them superstitions about spirits that dwelled in nature.

Unexplained noises that would echo off the bluffs added to the mystical aura of the gorge.

Thinking in terms of evil spirits, they would soon corrupt the name "Spirit Lake" to "Devil's Lake". 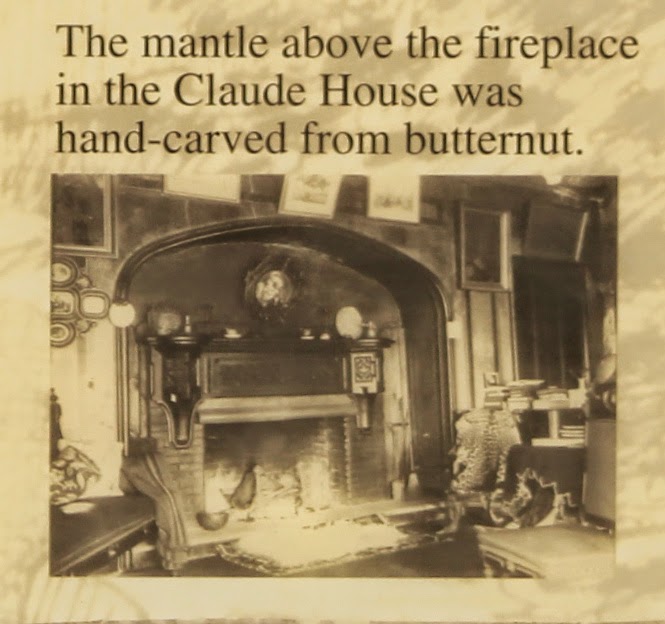 The mantle above the fireplace in the Claude House was hand-carved from butternut. 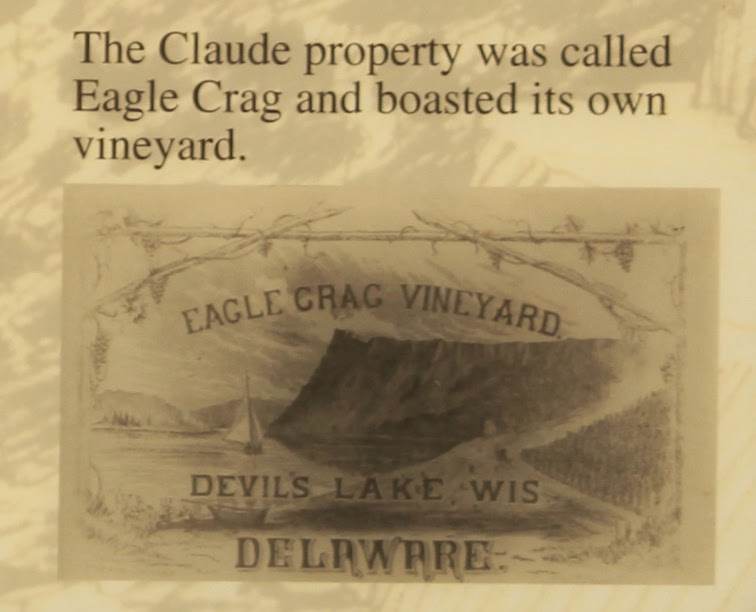 The Claude property was called Eagle Crag and boasted its own vineyard. 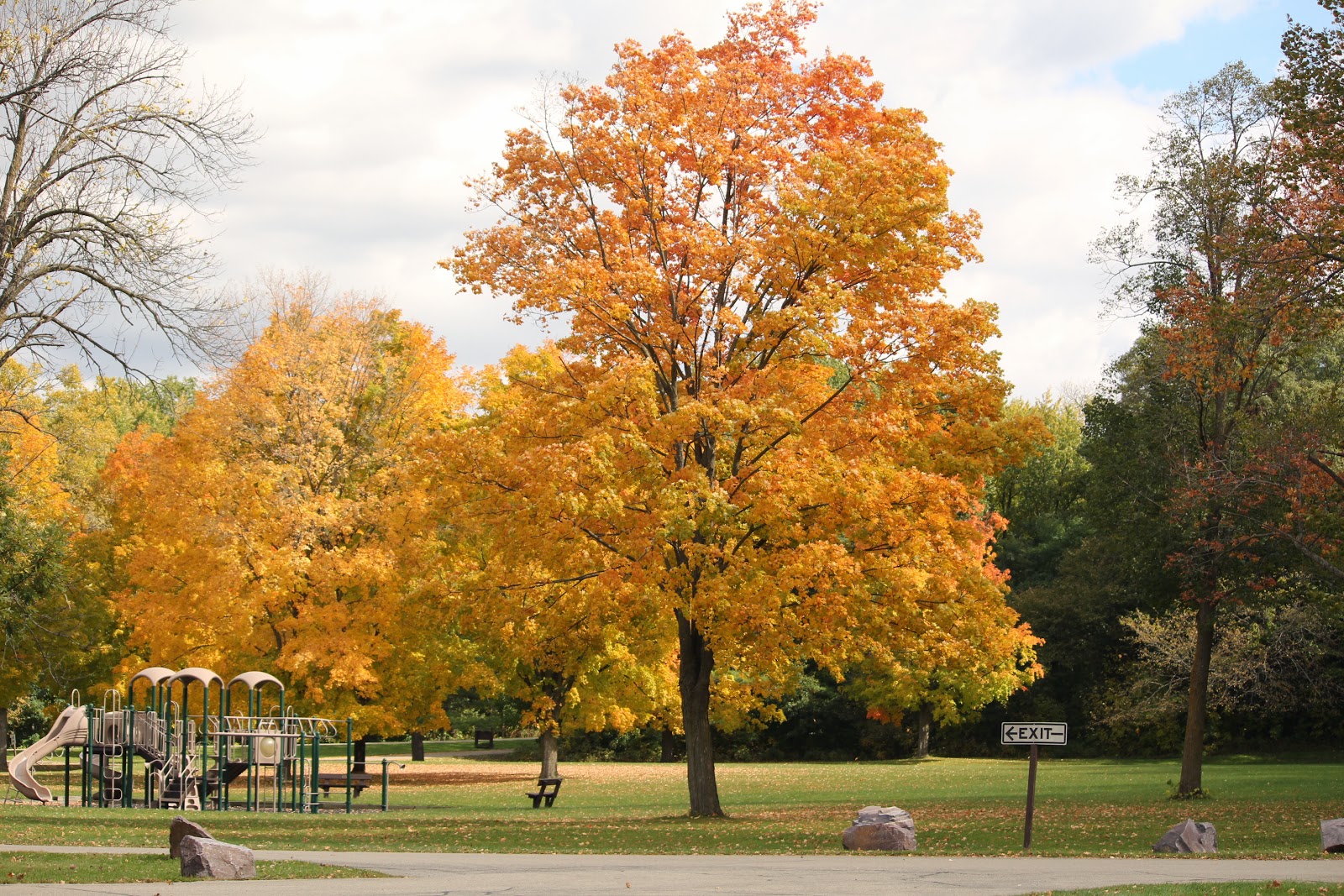 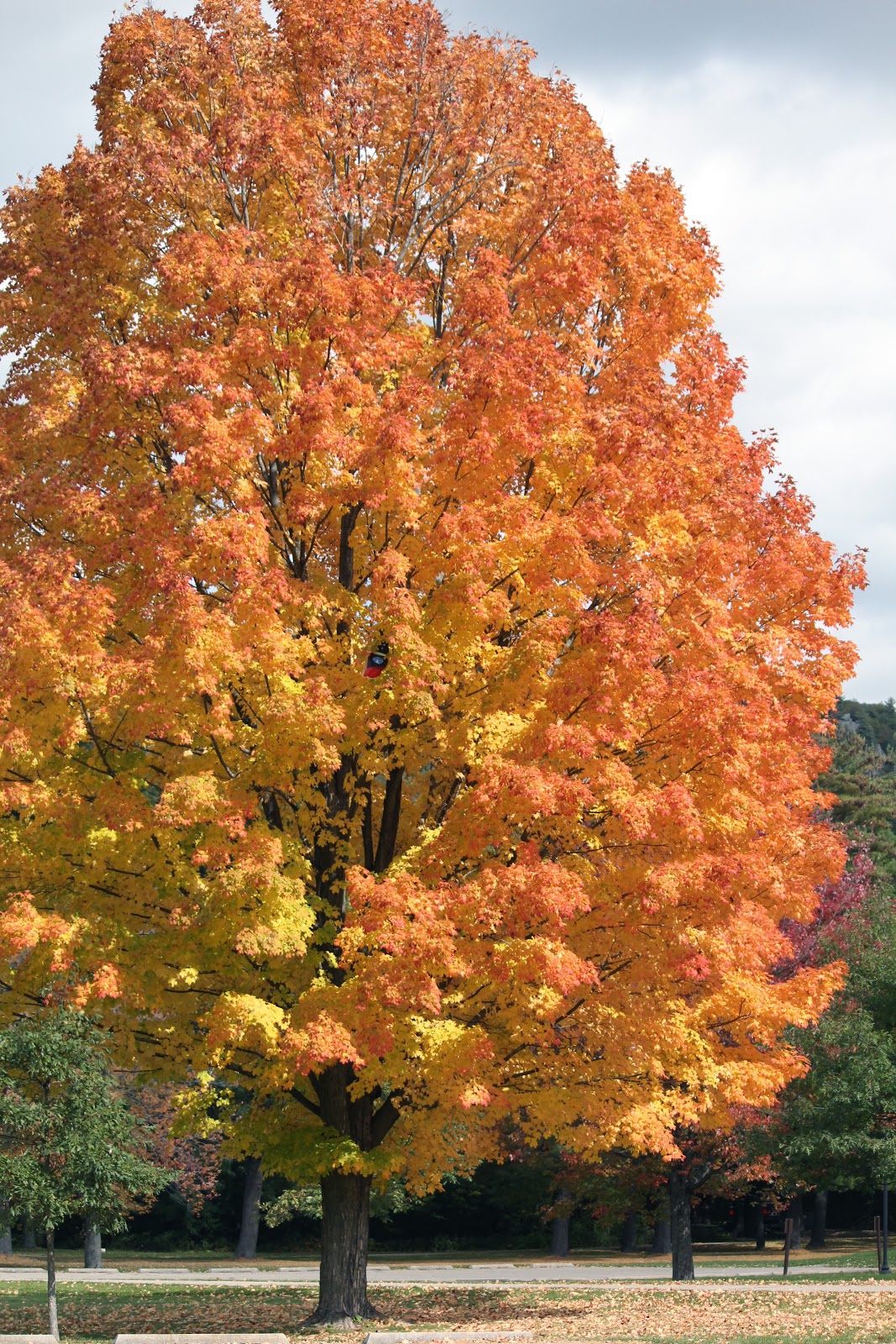 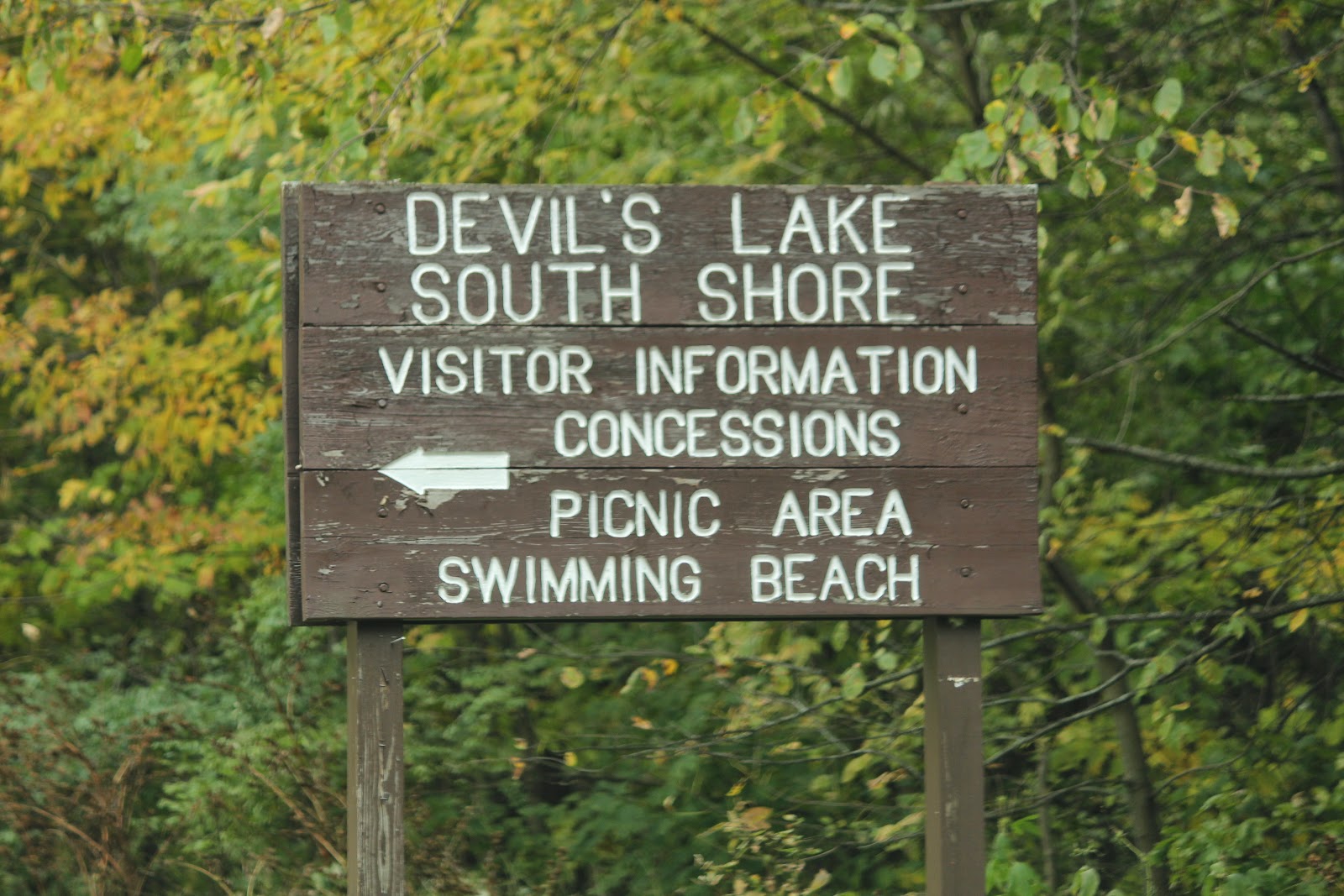 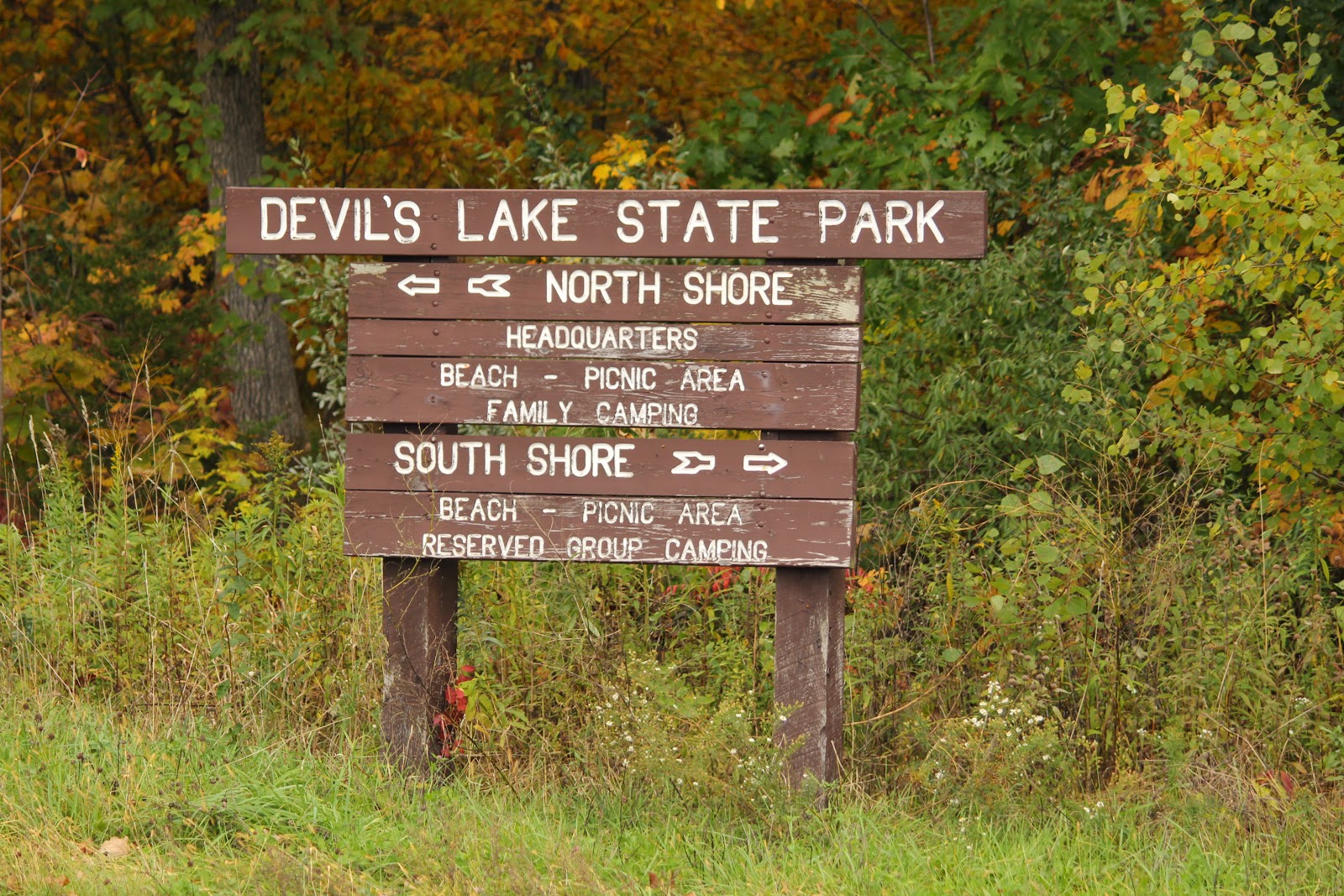 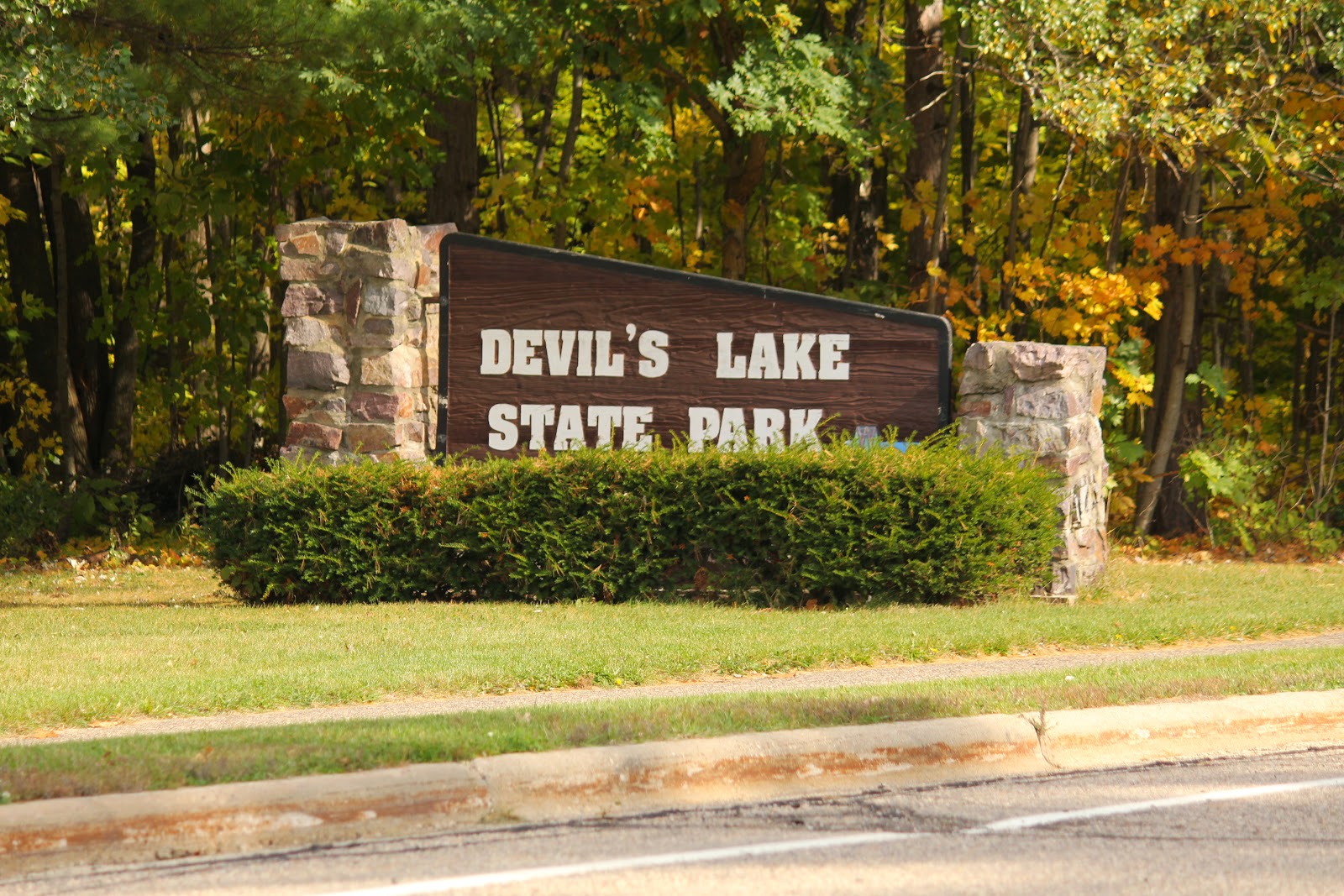 At the North Shore entrance to Devil's Lake State Park.