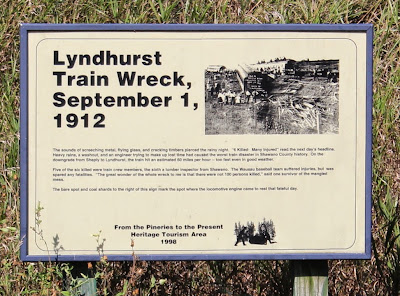 The sounds of screeching metal, flying glass, and cracking timbers pierced the rainy night. "6 Killed. Many Injured" read the next day's headline. Heavy rains, a washout, and an engineering trying to make up lost time had caused the worst train disaster in Shawano County history. On the downgrade from Sheply to Lyndhurst, the train hit an estimated 60 miles per hour -- too fast even in good weather.

Five of the six killed were train crew members, the sixth a lumber inspector from Shawano. The Wausau baseball team suffered injuries, but was spared any fatalities. "The great wonder of the whole wreck to me is that there were not 100 persons killed," said one survivor of the mangled mess.

The bare spot and coal shards to the right of this sign mark the spot where the locomotive engine came to rest that fateful day.

From the Pineries to the Present
Heritage Tourism Area
1998

NOTE: There is no legal parking at the trailhead or anywhere near the marker. I parked safely off the road, left a note on my dashboard, and hiked east approximately 10 minutes to the marker's location. Once at the location, there was no way to safely access the marker, which was across a small ditch and up a hill in an area thickly covered with grasses and shrubs. The photos were taken using my zoom lens.

MIKE MALLOY WAS INJURED
Wausau Baseball Team on Passengers When Crash Comes; Some are Hurt

SHAWANO, Wis., Sept. 2 -- Seven men were killed and twenty-five injured, several fatally, when the Northwestern railroad's Chicago and Ashland limited train was wrecked between Bowler and Lyndhurst, nine miles west of Shawano, early Sunday morning.
Hits Washout
The train was speeding southeast, and ran into a washout between Bowler and Lyndhurst shortly after 2:30 o'clock.
The engine was thrown to one side, the smoker was thrown fifty feet to the right and a Pullman sleeper, occupied by two men was thrown thirty feet to the left, injuring all of those in the car. The baggage car, which was immediately in the rear of the engine, was telescoped, pinning four of those killed under the wreckage. The roof of the baggage car was ripped off and thrown fifty feet.
Three Sleepers Derailed
The first, second and third sleepers were derailed, but the four coaches following remained on the tracks.
Among the more seriously injured were several members of the Wausau baseball team of the Wisconsin-Illinois league. William Kerwin, formerly of the Chicago Cubs pitching staff, probably will never pitch again. His skull was fractured and he was taken to Chicago in a serious condition. Glenn Davey, shortstop, likely will lose his arm.

The LaCrosse Tribune, September 2, 1912, page 1; the foregoing content is in the public domain. 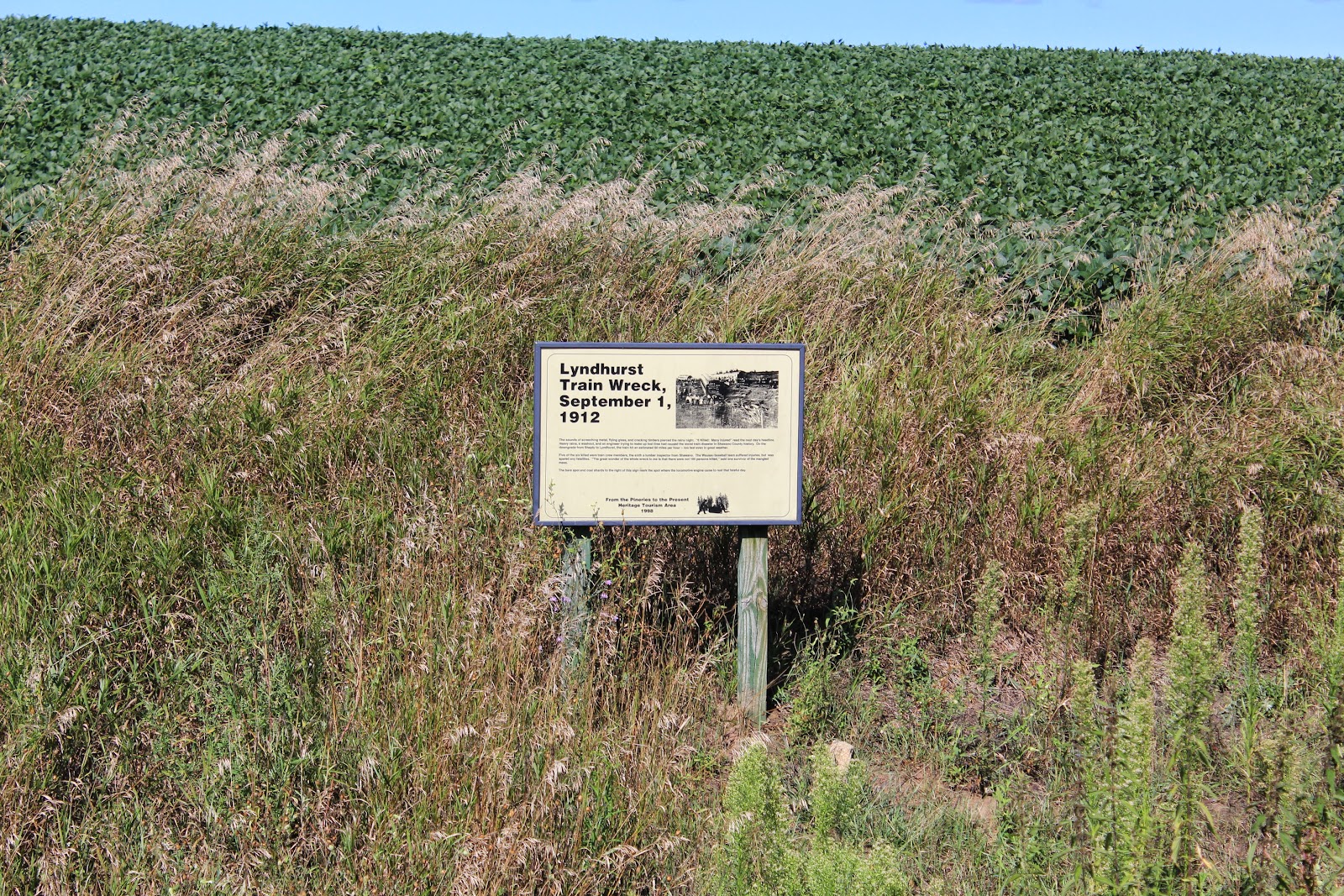 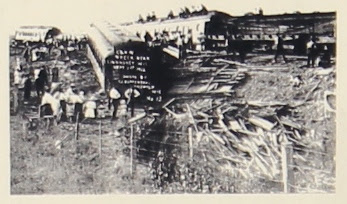 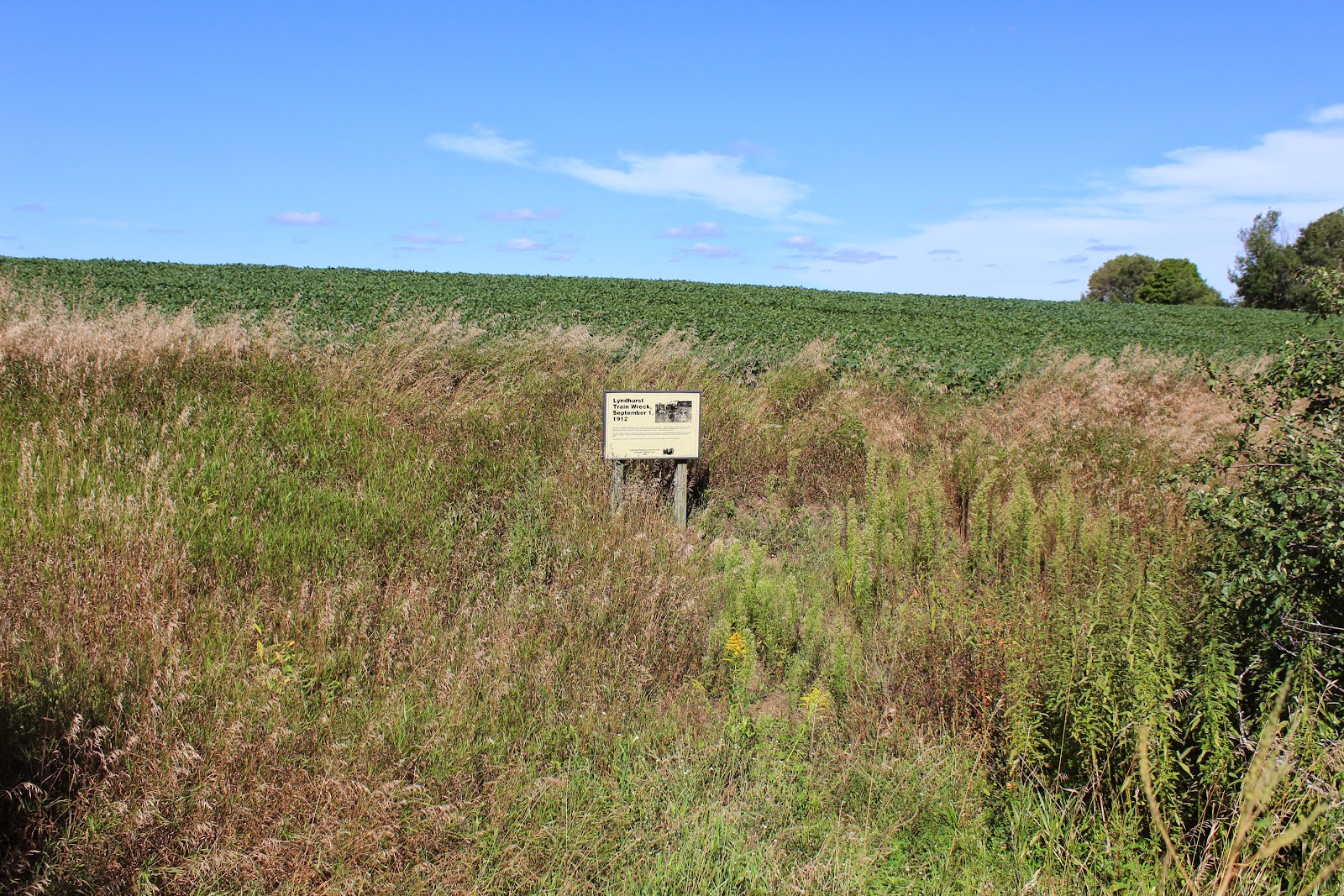 It is literally impossible to safely access the marker. 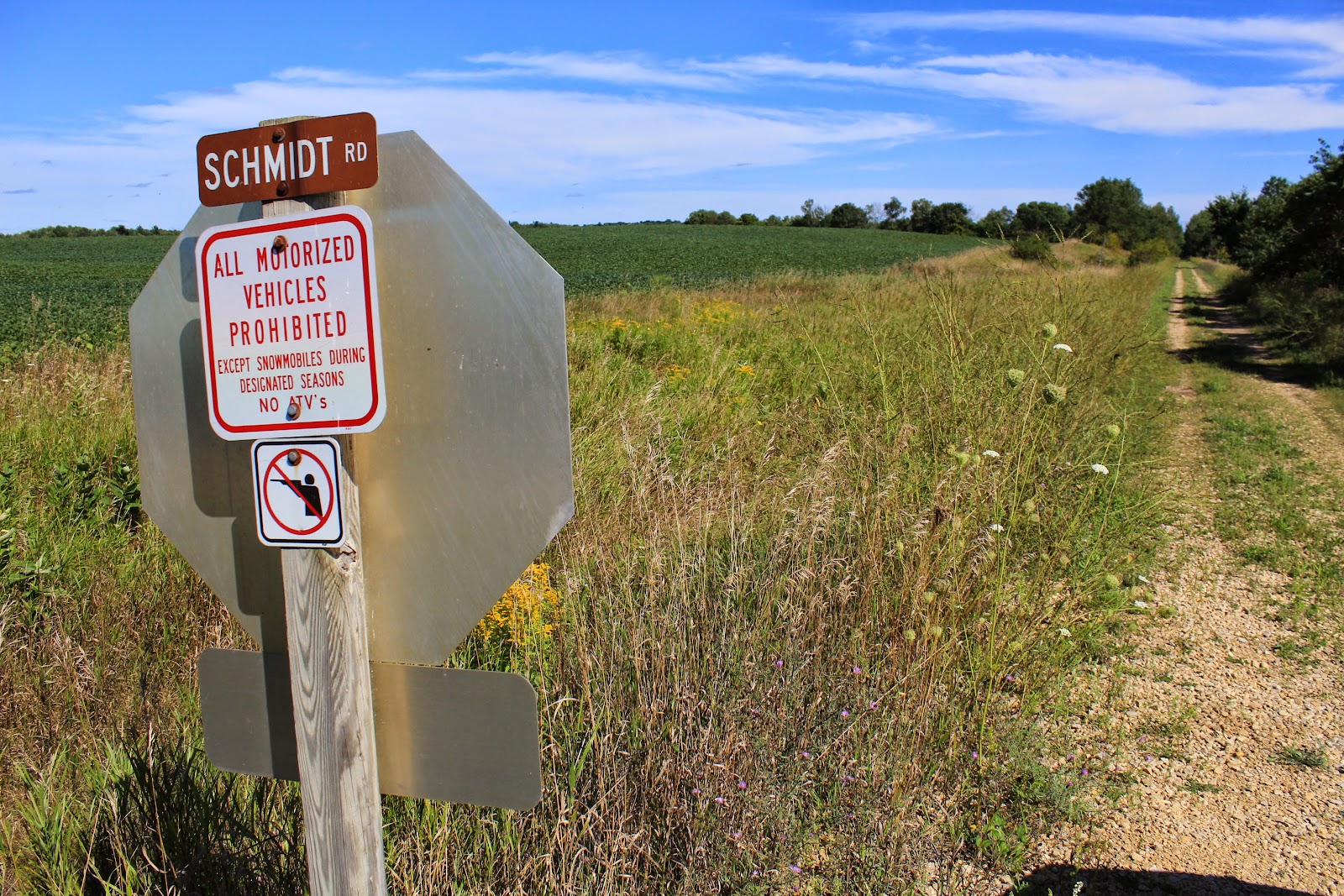 Start the hike here -- about 10 minutes to the marker's location. 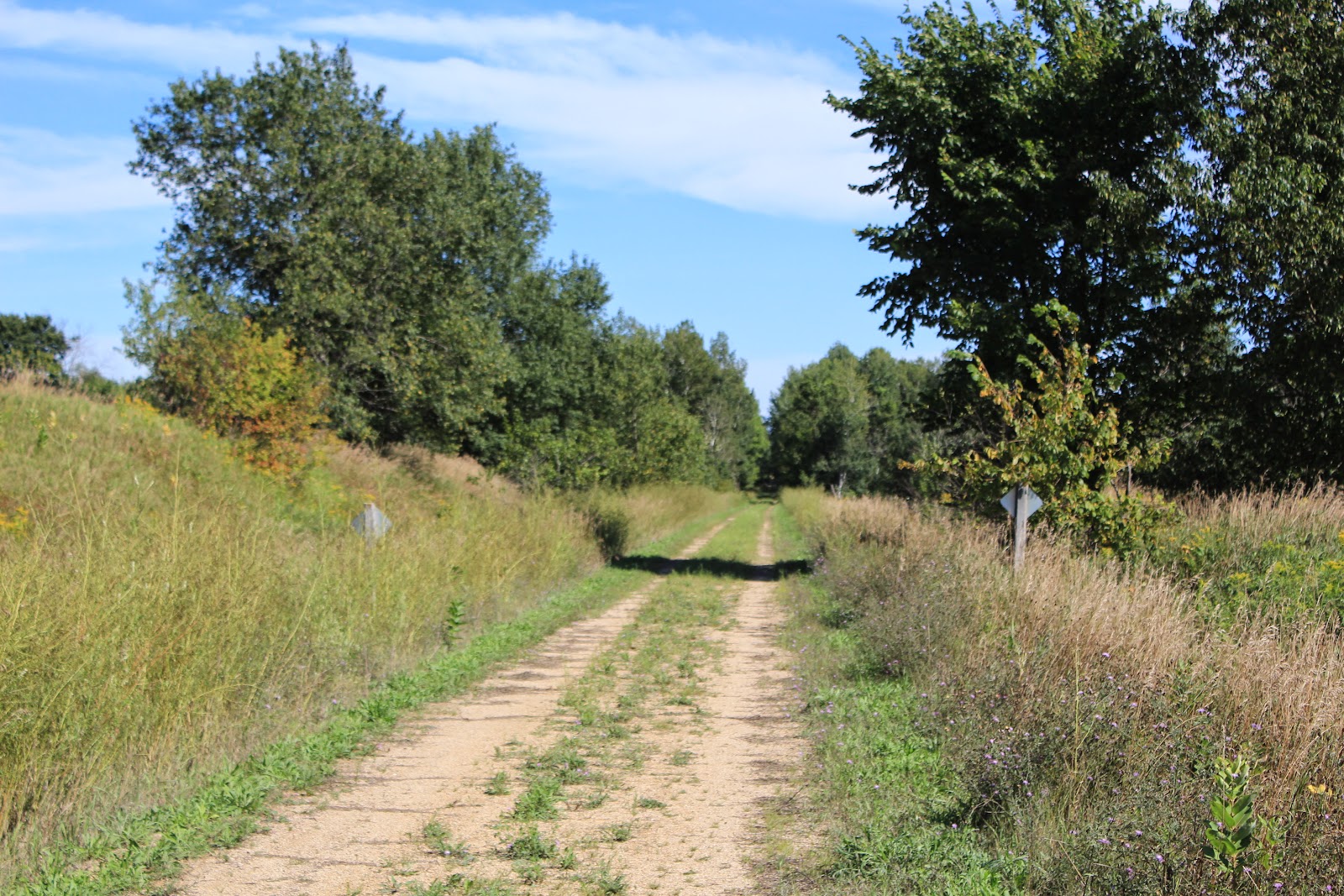 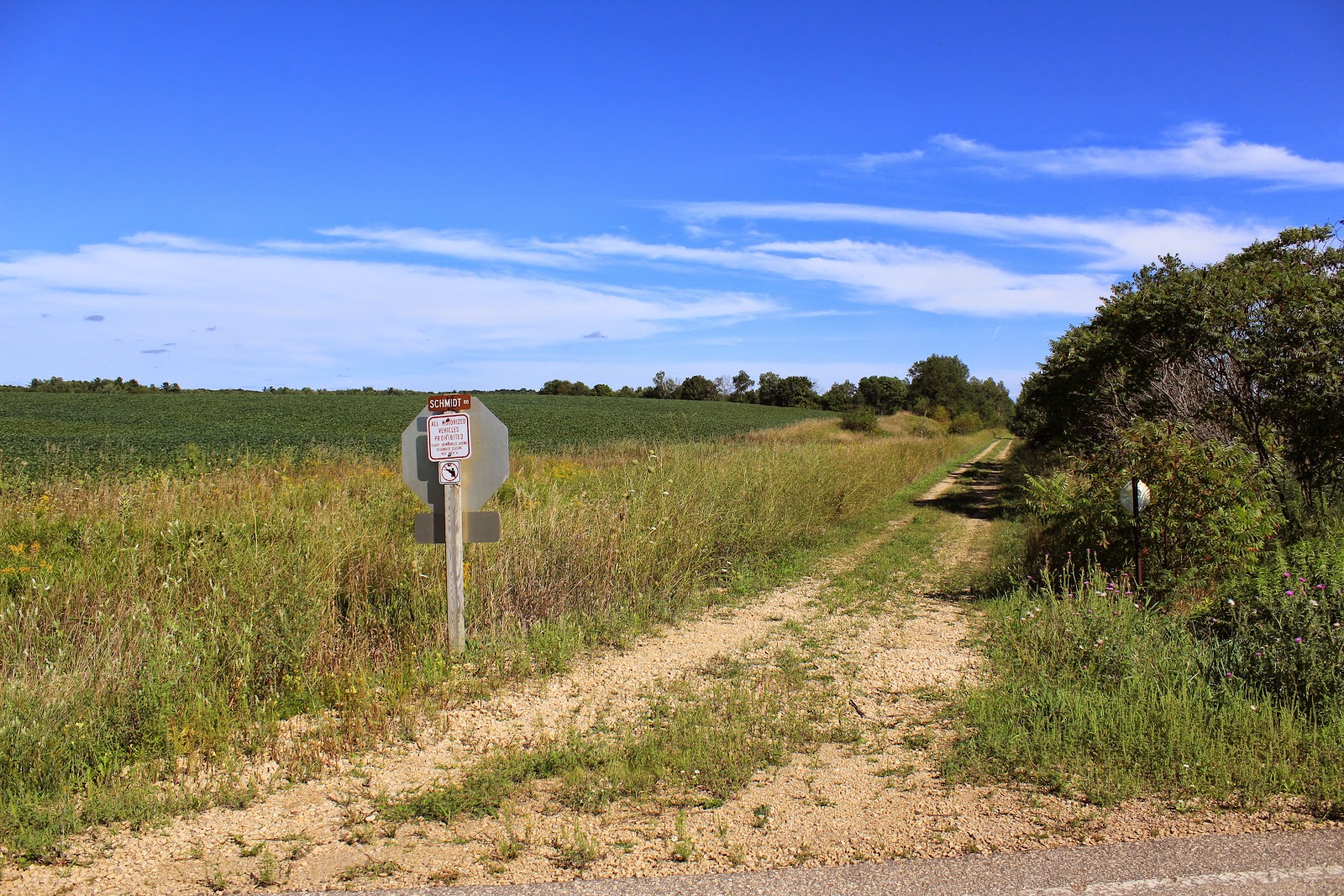 The marker is located in the farmlands of Gresham, Wisconsin.