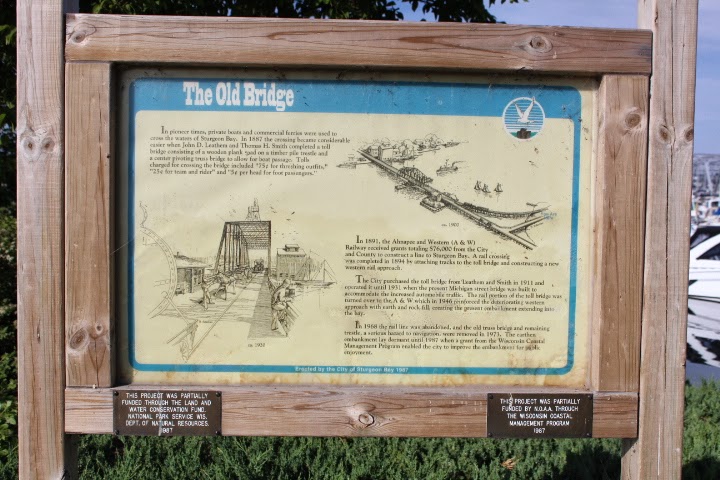 In pioneer times, private boats and commercial ferries were used to cross the waters of Sturgeon Bay. In 1887 the crossing became considerable [sic] easier when John D. Leathem and Thomas H. Smith completed a toll bridge consisting of a wooden plank road on a timber pile trestle and a center pivoting truss bridge to allow for boat passage. Tolls charged for crossing the bridge included "75¢ for threshing outfits," "25¢ for team and rider" and "5¢ per head for foot passengers."

In 1891, the Ahnapee and Western (A & W) Railway received grants totalling $76,000 from the City and County to construct a line to Sturgeon Bay. A rail crossing was completed in 1894 by attaching tracks to the toll bridge and constructing a new western rail approach.

The City purchased the toll bridge from Leathem and Smith in 1911 and operated it until 1931 when the present Michigan street bridge was built to accommodate the increased automobile traffic. The rail portion of the toll bridge was turned over to the A & W which in 1946 reinforced the deteriorating western approach with earth and rock fill, creating the present embankment extending into the bay.

In 1968 the rail line was abandoned, and the old truss bridge and remaining trestle, a serious hazard to navigation, were removed in 1973. The earthen embankment lay dormant until 1987 when a grant from the Wisconsin Coastal Management Program enabled the city to improve the embankment for public enjoyment.

NOTE: You cannot access the marker from North Madison Avenue.

With Madison Street Bridge in the background . . .

The marina behind the marker.

Access the marker from the Bay View Park parking lot.