From First Americans to Euroamericans: After the Fire: The Vandermissen Brickworks Site 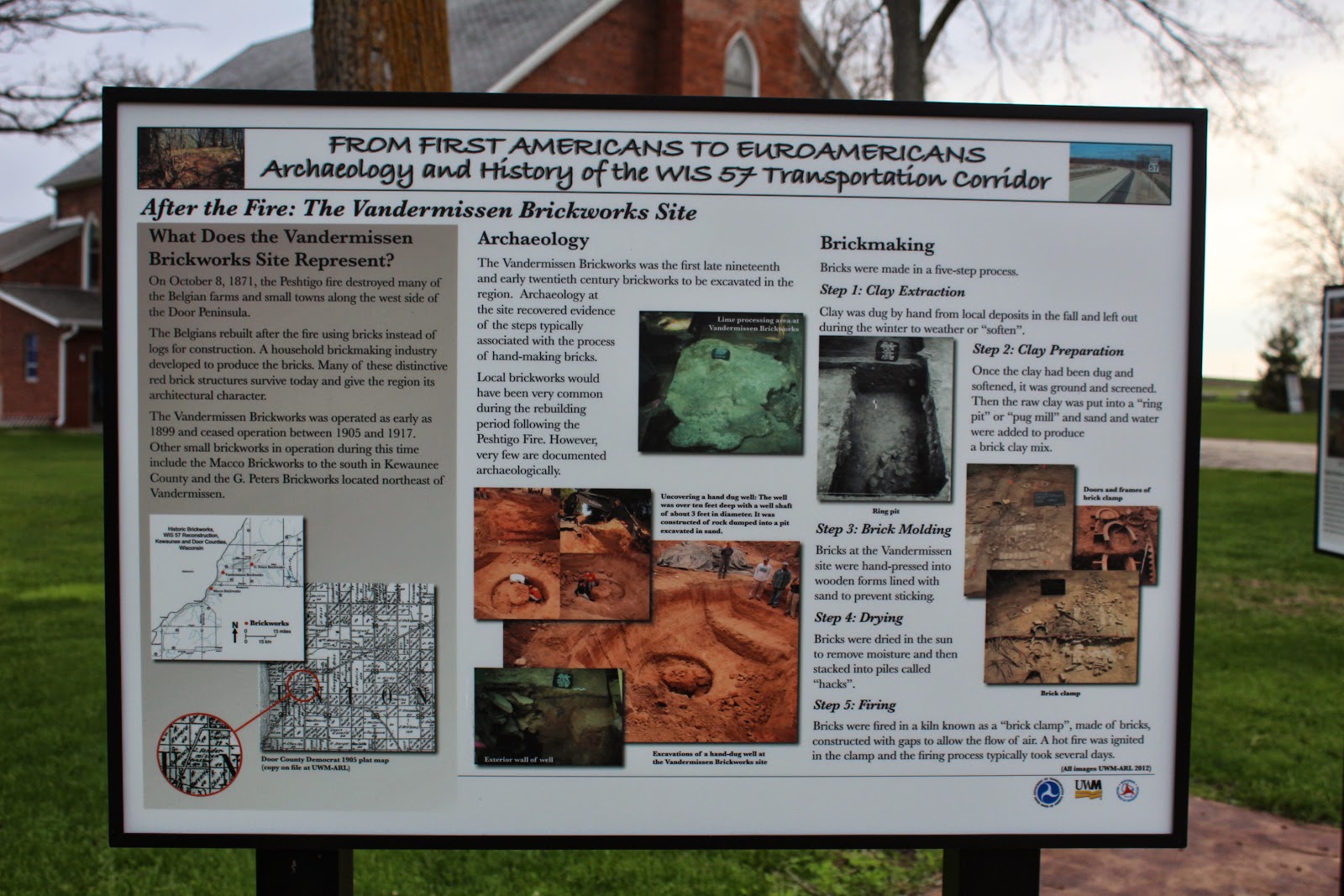 From First Americans to Euroamericans
Archaeology and History of the WIS 87 Transportation Corridor
After the Fire: The Vandermissen Brickworks Site

What Does the Vandermissen Brickworks Site Represent?
On October 8, 1871, the Peshtigo fire destroyed many of the Belgian farms and small towns along the west side of the Door Peninsula.

The Belgians rebuilt after the fire using bricks instead of logs for construction. A household brickmaking industry developed to produce the bricks. Many of these distinctive red brick structures survive today and give the region its architectural character.

The Vandermissen Brickworks was operated as early as 1899 and ceased operation between 1905 and 1917. Other small brickworks in operation during this time include the Macco Brickworks to the south in Kewaunee County and the G. Peters Brickworks located northeast of Vandermissen.

Archaeology
The Vandermissen Brickworks was the first late 19th and early twentieth century brickworks to be excavated in the region. Archaeology at the site recovered evidence of the steps typically associated with the process of hand-making bricks.

Local brickworks would have been very common during the rebuilding period following the Peshtigo Fire. However, very few are documented archaeologically.

Brickmaking
Bricks were made in a five-step process.
Step 1: Clay Extraction
Clay was dug by hand from local deposits in the fall and left out during the winter to weather or "soften".
Step 2: Clay Preparation
Once the clay had been dug and softened, it was ground and screened. Then the raw clay was put into a "ring pit" or "pug mill" and sand and water were added to produce a brick clay mix.
Step 3: Brick Molding
Bricks at the Vandermissen site were hand-pressed into wooden forms lined with sand to prevent sticking.
Step 4: Drying
Bricks were dreid in the sun to remove moisture and then stacked into piles called "hacks".
Step 5: Firing
Bricks were fired in a kiln known as a "brick clamp", made of bricks, constructed with gaps to allow the flow of air. A hot fire was ignited in the clamp and the firing process typically took several days.

The markers are located at the Namur Belgian Heritage Foundation Center (the former Our Lady of Snows Church and Cemetery) on westbound County Road DK, between Pit Road (to the east) and County Road N (to the west), Brussels, Wisconsin 54204.

This marker is one of a series markers regarding the Archaeology and History of the WIS 57 Transportation Corridor.