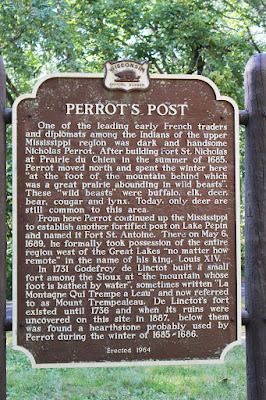 One of the leading early French traders and diplomats among the Indians of the upper Mississippi region was dark and handsome Nicholas Perrot. After building Fort St. Nicholas at Prairie du Chien in the summer of 1685, Perrot moved north and spent the winter here "at the foot of the mountain behind which was a great prairie abounding in wild beasts." These "wild beasts" were buffalo, elk, deer, bear, cougar and lynx. Today, only deer are still common to this area.

From here Perrot continued up the Mississippi to establish another fortified post on Lake Pepin and named it Fort St. Antoine. There on May 6, 1689, he formally took possession of the entire region west of the Great Lakes "no matter how remote" in the name of his king, Louis XIV.

In 1731 Godefroy de Linctot built a small fort among the Sioux at "the mountain whose foot is bathed by water", sometimes written "La Montagne Qui Trempe a Leau" and now referred to as Mount Trempealeau. De Linctot's fort existed until 1736 and when its ruins were uncovered on this site in 1887, below them was found a hearthstone probably used by Perrot during the winter of 1685-1686.

The marker is located in Perrot State Park, W26247 Sullivan Road / South Park Road, west of its intersection Spring Street, Trempealeau, Wisconsin 54661. This marker is located in a free area, at a pullout before the ranger station where fees are paid.
See also, Marker 486: Brady's Bluff and French Post Marker, also at Perrot Park. 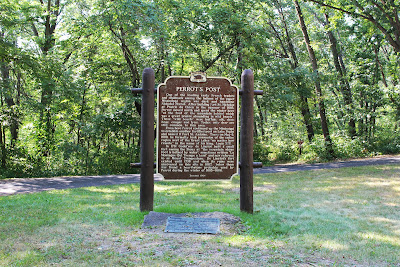 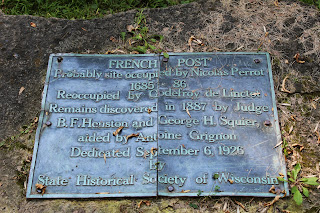 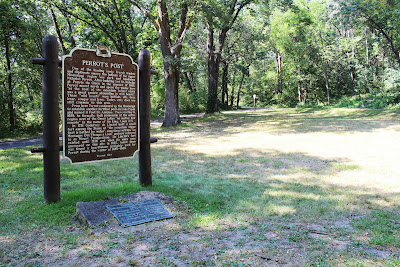 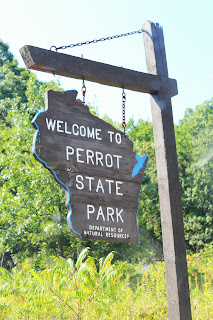 The marker is located near the entrance to Perrot State Park.