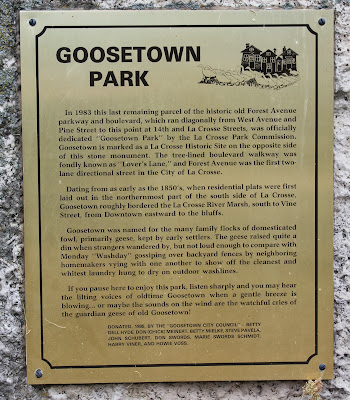 In 1983 this last remaining parcel of the historic old Forest Avenue parkway and boulevard, which ran diagonally from West Avenue and Pine Street to this point at 14th and La Crosse Streets, was officially dedicated "Goosetown Park" by the La Crosse Park Commission. Goosetown is marked as a La Crosse Historic Site on the opposite side of this stone monument. The tree-lined boulevard walkway was fondly known as "Lover's Lane," and Forest Avenue was the first two-lane directional street in the City of La Crosse.

Dating from as early as the 1950's, when residential plats were first laid out in the northernmost part of the south side of La Crosse, Goosetown roughly bordered the La Crosse River Marsh, south to Vine Street, from Downtown eastward to the bluffs.

Goosetown was named for the many family flocks of domesticated fowl, primarily geese, kept by early settlers. The geese raised quite a din when strangers wandered by, but not loud enough to compare with Monday "Washday" gossiping over backyard fences by neighboring homemakers vying with one another to show off the cleanest and whitest laundry hung to dry on outdoor washlines.

If you pause here to enjoy this park, listen sharply and you may hear the lilting voices of oldtime Goosetown when a gentle breeze is blowing. . . or maybe the sounds on the wind are the watchful cries of the guardian geese of old Goosetown!

Donated 1995, by the "Goosetown City Council"


The marker is located on a slight knoll on eastbound La Crosse Street / Wisconsin Route 16, just east of its intersection with Oakland Street, La Crosse, Wisconsin 54601. 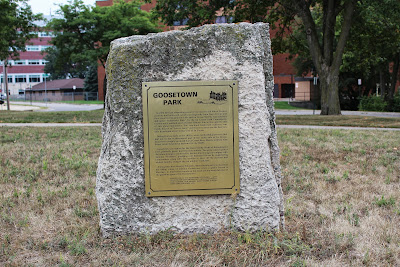 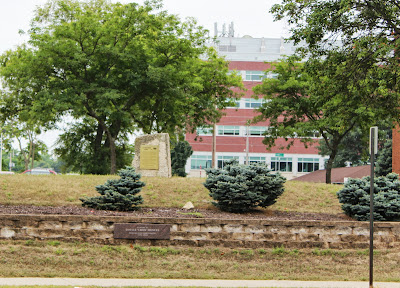 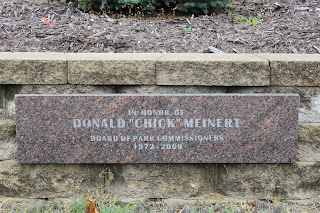