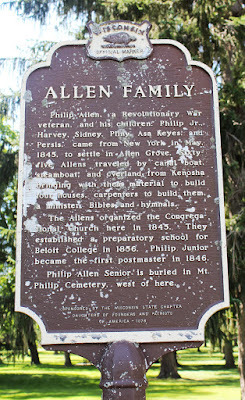 Philip Allen, a Revolutionary War veteran, and his children, Philip Jr., Harvey, Sidney, Pliny, Asa Keyes, and Persis, came from New York in May, 1845, to settle in Allen Grove. Sixty-five Allens traveled by canal boat, steamboat, and overland from Kenosha bringing with them material to build four houses, carpenters to build them, a minister, Bibles and hymnals.

The Allens organized the Congregational Church here in 1845. They established a preparatory school for Beloit College in 1856. Philip Junior became the first postmaster in 1846.

The marker is located on Clinton Street, north of its intersection with County Route X, at the north end of Village Union Park, Darien, Wisconsin 53114.

See also,  Marker 296: Soldier of the American Revolution (Philip Allen)
NOTE: Marker 296 is in Rock County, but only a few miles from the location of this marker. 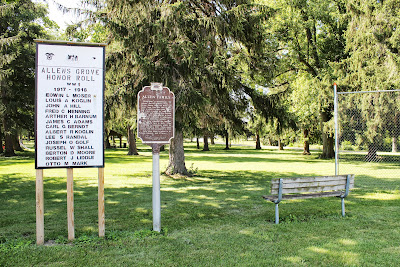 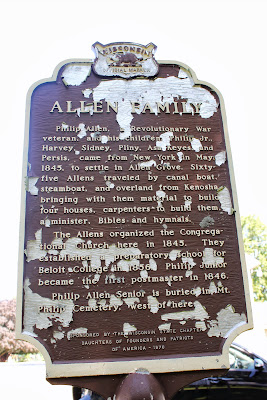 The back side of the marker, also badly worn.