Introduction to the Geology of the Cadott Region 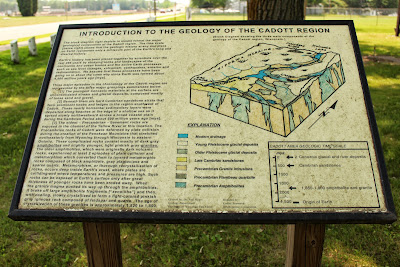 INTRODUCTION TO THE GEOLOGY OF THE CADOTT REGION

The block diagram right depicts in simple format the major geological components of the Cadott region. The time scale [below right] shows that the geologic history at any one place on Earth represents only a miniscule part of the Earth's long and diverse history.

Earth's history has been pieced together by scientists over the last 200 years by studying rocks and landscapes of the continents and ocean basins and the active Earth processes such as sea level changes, volcanism, earthquakes, erosion and sedimentation. We assume that these processes have been going on in about the same way since Earth was formed about 4,500 million years ago [mya].

Three major episodes in the chronology of the Cadott region are represented by the three major groupings summarized below.

[1] The youngest Cenozoic materials at the surface are unconsolidated stream and glacial deposits, composed mostly of loose sand and gravel.

[2] Beneath them are hard Cambrian sandstone strata that form prominent knobs and ledges in the region southwest of Cadott. These nearly horizontal sedimentary layers were deposited along beaches at the edge of a shallow sea as it spread slowly northwestward across a broad coastal plain during the Cambrian Period about 500 million years ago [mya].

[3] The oldest - Precambrian - basement rocks are exposed in the channel of the Yellow River at this location. The Precambrian rocks of Cadott were deformed by plate collision during the creation of the Penokean Mountains that streached northeasterly from Wyoming through Wisconsin to eastern Ontario. These complicated rocks consist mostly of dark gray amphibolites and slightly younger, light pinkish gray granites. The older amphibolites, which were originally dark volcanic rocks, experienced at least 2 episodes of plate collision and metamorphism which converted them to layered metamorphic rocks composed of black amphibole, gray plagioclase and sparse quartz. Metamorphism, or thorough recrystallization of rocks, occurs deep inside Earth's crust, where plates are colliding and where temperatures and pressures are high. Such rocks can be exposed at Earth's surface only after great thickness of younger rocks have been eroded away. When the granite magma pushed its way up through the amphibolites, it broke off large amphibolite fragments ["xenoliths"] and then, with cooling, slowly crystallized to form a light-colored pinkish gray igneous rock composed of feldspar and quartz. The age of crystallization of these granites is approximately 1,820 to 1,800.

NOTE: Some paragraphs added for ease in reading. 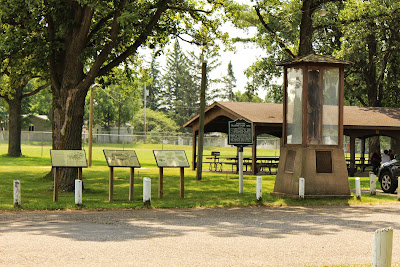 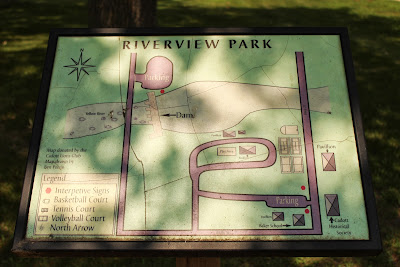 The marker is at the entrance to Riverview Park. 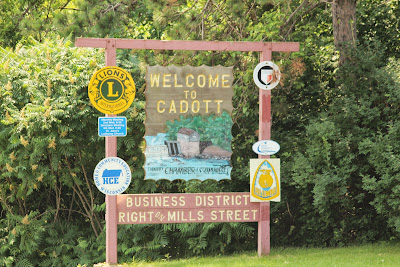