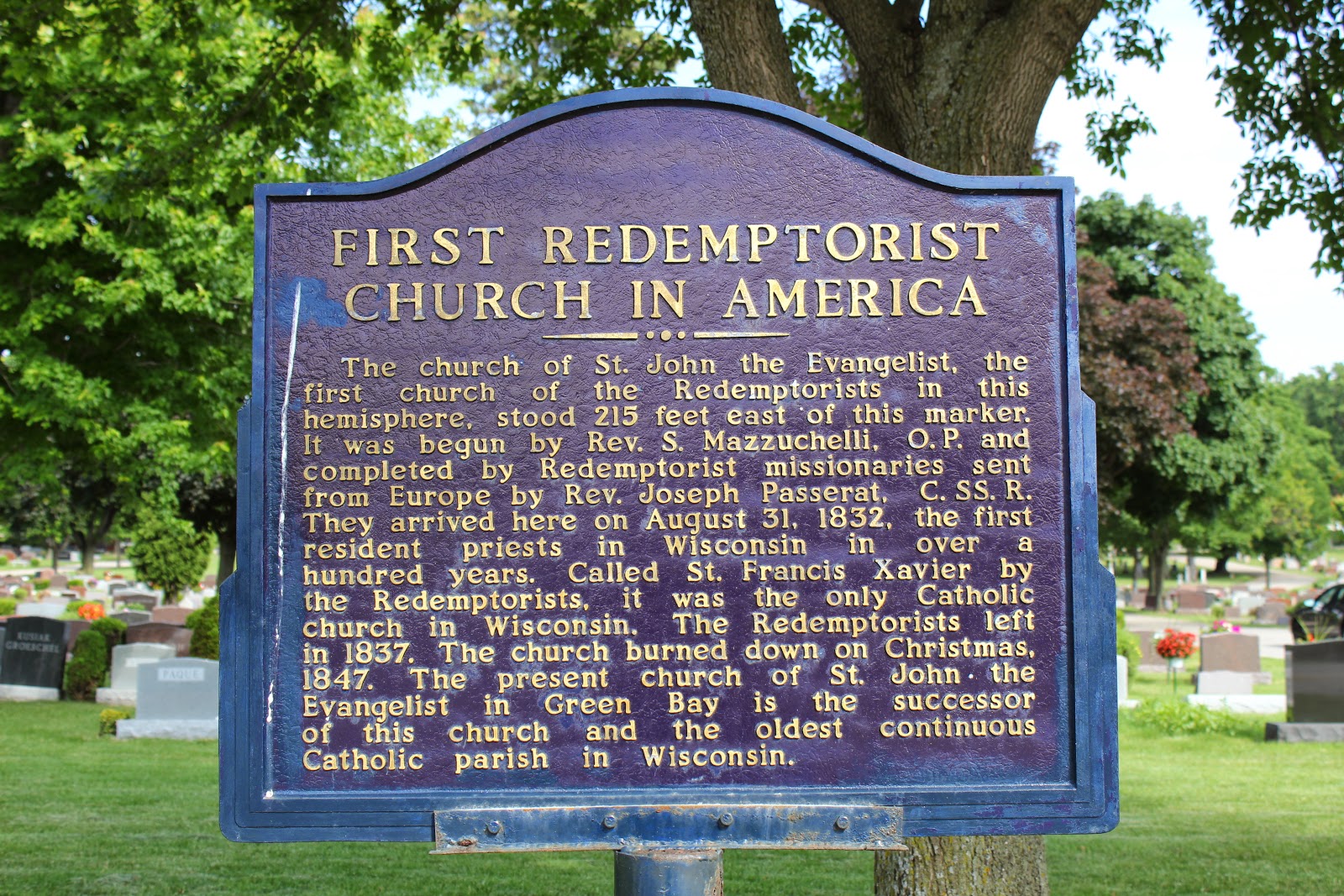 The church of St. John the Evangelist, the first church of the Redemptorists in this hemisphere, stood 215 feet east of this marker. It was begun by Rev. S. Mazzuchelli, O. P. and completed by Redemptorist missionaries sent from Europe by Rev. Joseph Passerat, C. SS. R. They arrived here on August 31, 1832, the first resident priests in Wisconsin in over a hundred years. Called St. Francis Xavier by the Redemptorists, it was the only Catholic church in Wisconsin. The Redemptorists left in 1837. The church burned down on Christmas, 1847. The present church of St. John the Evangelist in Green Bay is the successor of this church and the oldest continuous Catholic parish in Wisconsin.

The marker is located at Allouez Catholic Cemetery on northbound Riverside Drive, north of its intersection with West Allouez Avenue, Allouez, Wisconsin 54301.

The Apostle of the Upper Midwest: Samuel Mazzuchelli

See also, St. John the Evangelist Congregation, a related marker at a nearby location. 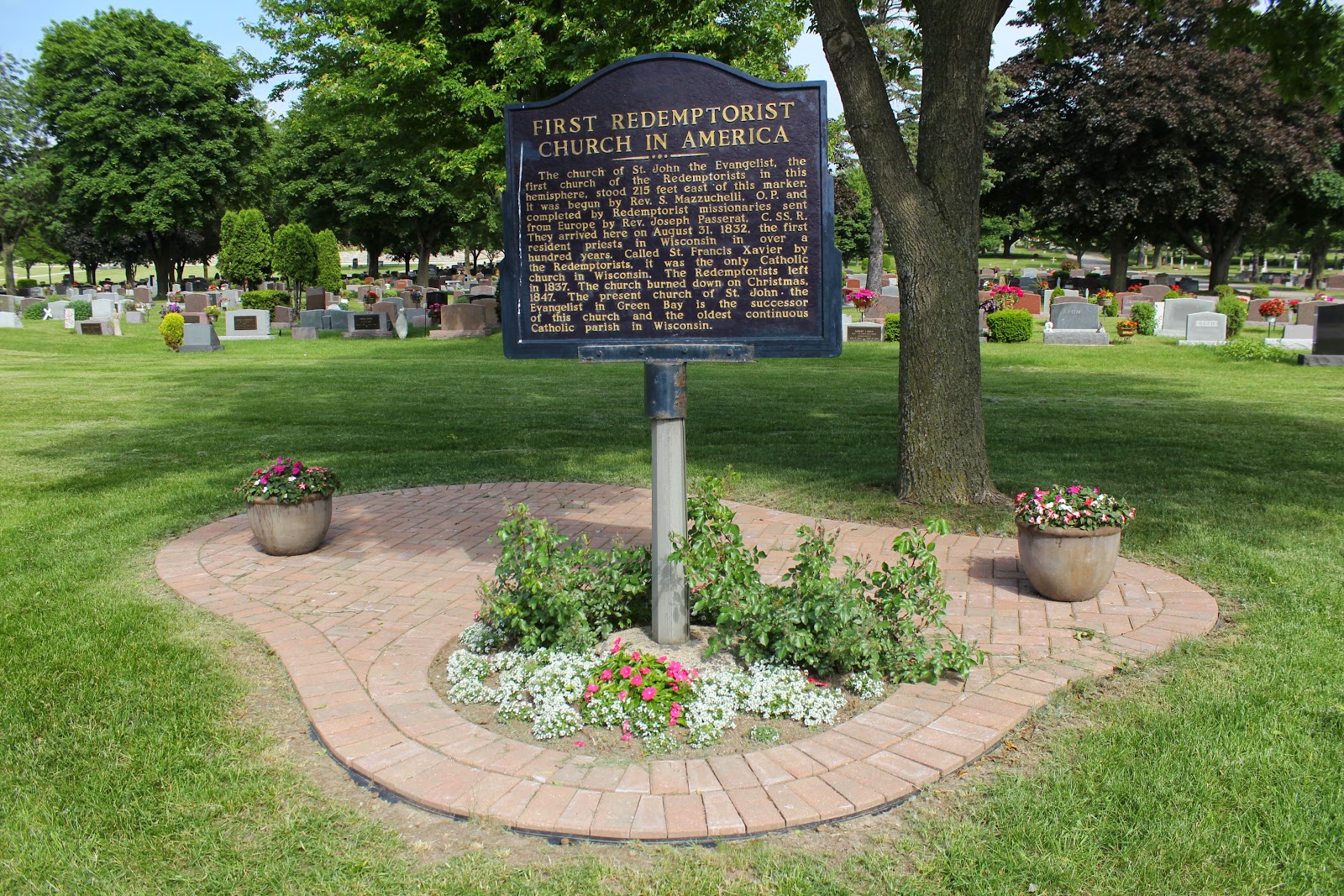 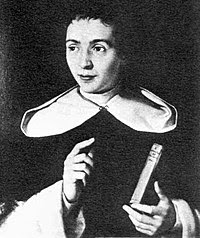 A portrait of 18-year-old Father Mazzuchelli, as he entered the Dominican Order.
This portrait is in the public domain. 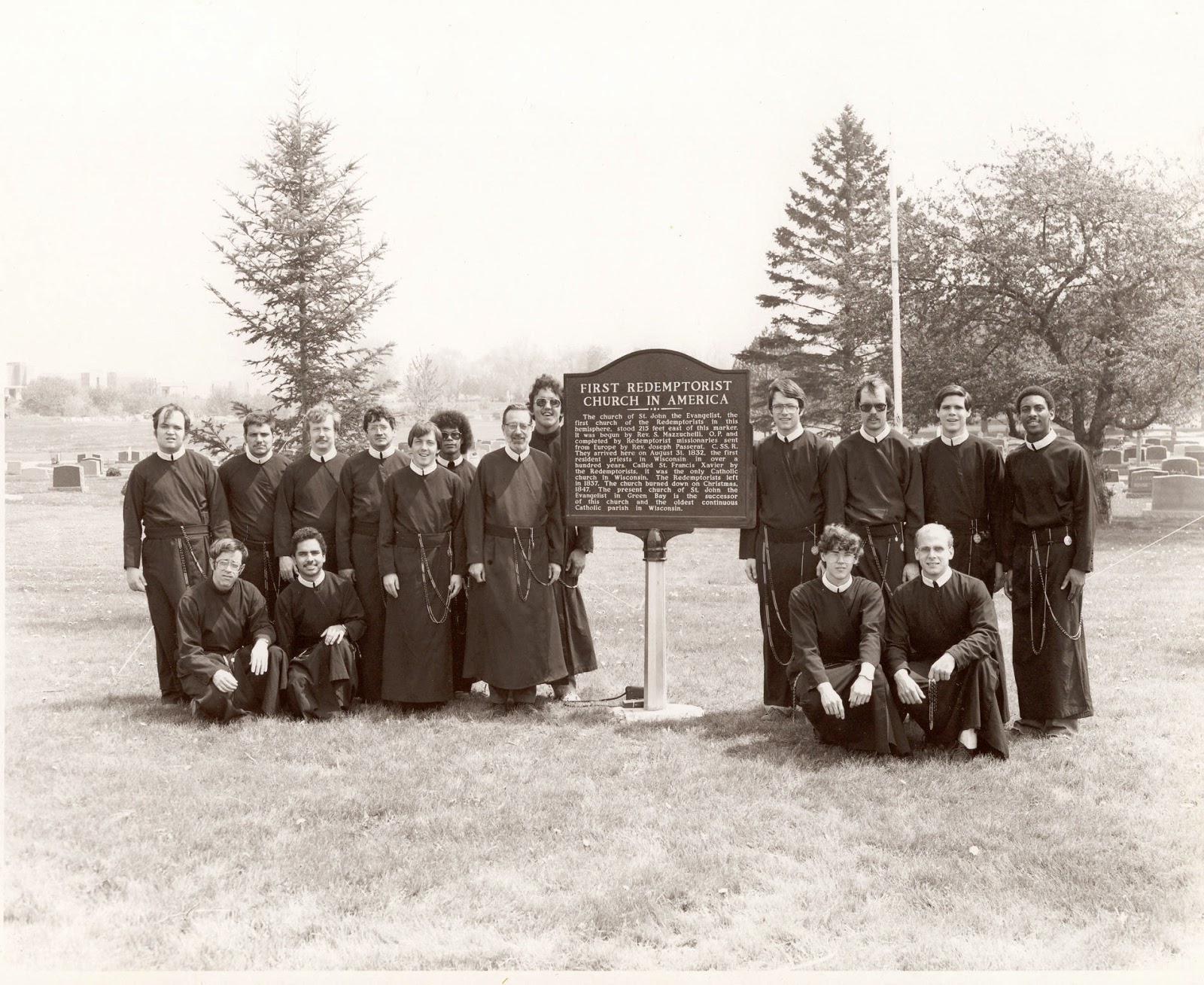 Photographed August 31, 1982
The Redemptorists priests and novices at the marker dedication
Photo and permission for use generously and graciously
provided by St. John the Evangelist Church.

The first Redemptorists, Father Simon Saenderl C.Ss.R. and Brother Wenceslaus Witopil, arrived in Green Bay on August 31, 1832 after being assigned to accompany Father Mazzuchelli from Mackinac to St.John’s by Bishop Fenwick of the Diocese of Cincinnati. 2 Father Francis X. Haetscher C.Ss.R. and Brother Joseph Reisch arrived later and helped in the completion of the church in 1833. In 1831 Father Samuel Mazzuchelli originally named the church after St. John the Evangelist but while the Redemptorists were there they dedicated the completed church to St. Francis Xavier, patron saint of missions.

On May 28, 1980 the Redemptorists returned to the site of their first mission, since Father Francis Haetscher left St. John’s in 1837. “We arrived at Allouez Cemetery and went to see the Diocesan archivist, John Ebert, who gave us a copy of a surveyor’s map showing the location of the foundation of the church. With map in hand, a 100 ft. tape measure, and assistance from Mr. Ebert, we measured the site of the first church.” 3 Mr. Ebert also showed them the square nails, a church key, and other artifacts dug up at the site of the church. 4 On June 3rd, a photo was taken of thirteen Redemptorist priests, novices, and fraters outlining the perimeter of the church. 3

In September 1980, Father Joe Bilsley, C.Ss.R. and Father Joe Adamec, C.Ss.R. visited with Father Paul Demuth, Pastor of St. John’s, and discussed the possibilities of an historical marker. 5 Father Adamec and Father Bilsley were responsible for the historical marker project and contacted the Diocese of Green Bay, the Redemptorist Provincial Rev. Edmund Langton, C.Ss.R., the Allouez Catholic Cemetery, and the Sewah Studios for approval. Father Langton replied, “Unless paying for the cost far exceeds our anticipation, the St. Louis Province would be able and willing to finance the project.” The final cost of the marker was $600.00. 6

“So one hundred and fifty years later, to the very day, the Redemptorists returned to Green Bay to honor this historical event.” …”That afternoon, we con-celebrated Mass, sang “Salve Regina”, and blest the Shrine – size Icon of Perpetual Help, which was presented to St. John’s to commemorate this day. St. John’s was presented with a framed painting of Our Lady of Perpetual Help. After Mass there was a “cheese and wine time”, followed by a dinner in the parish hall.” 7

In leaving St. John’s, the Redemptorists visited the Historical Plaque and again took a picture of the priests and novices next to the marker. 8 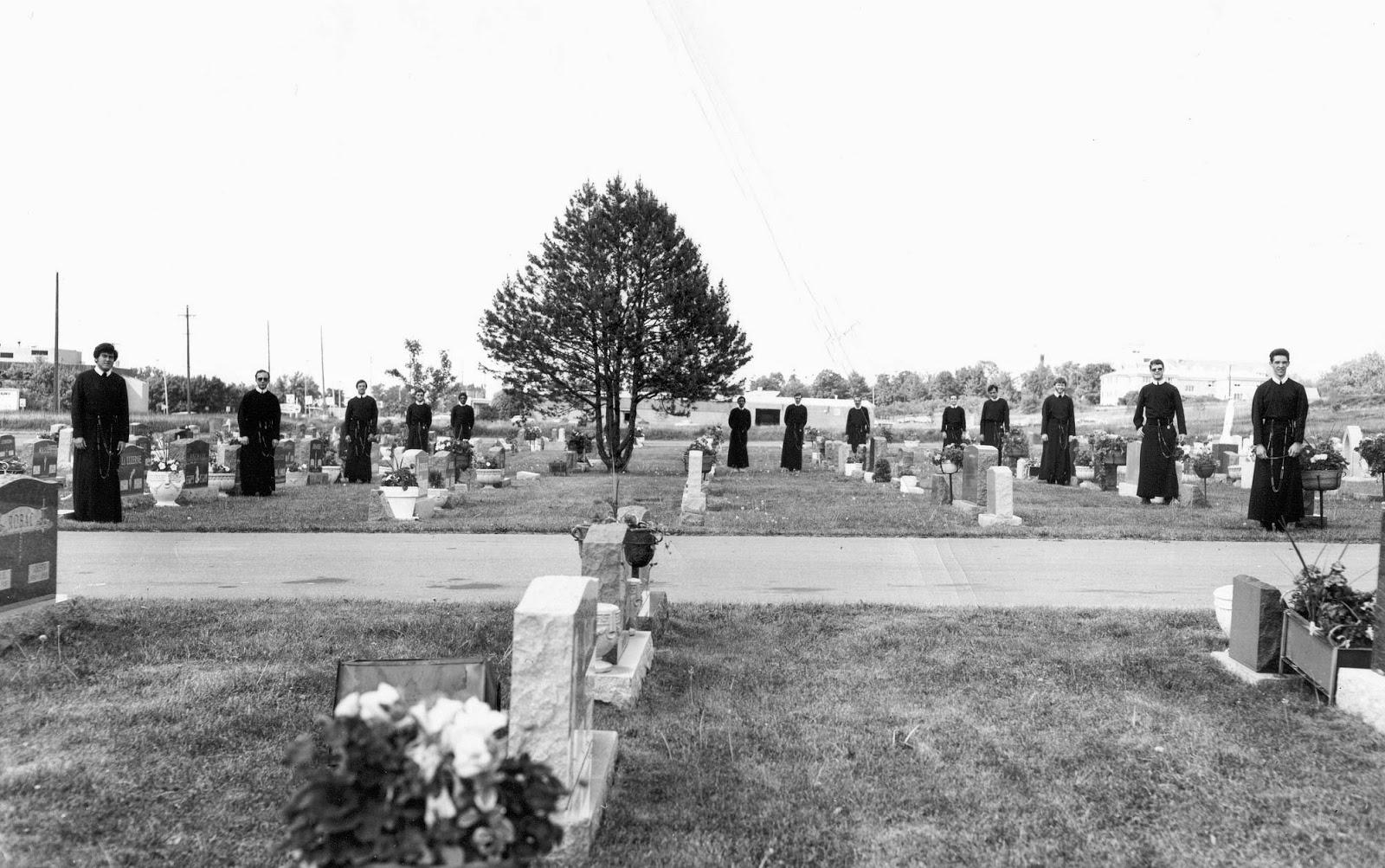 Photographed August 31, 1982
The Redemptorists priests and novices form the
outline of the First Redemptorist Church in America
Photo and permission for use generously and graciously
provided by St. John the Evangelist Church. 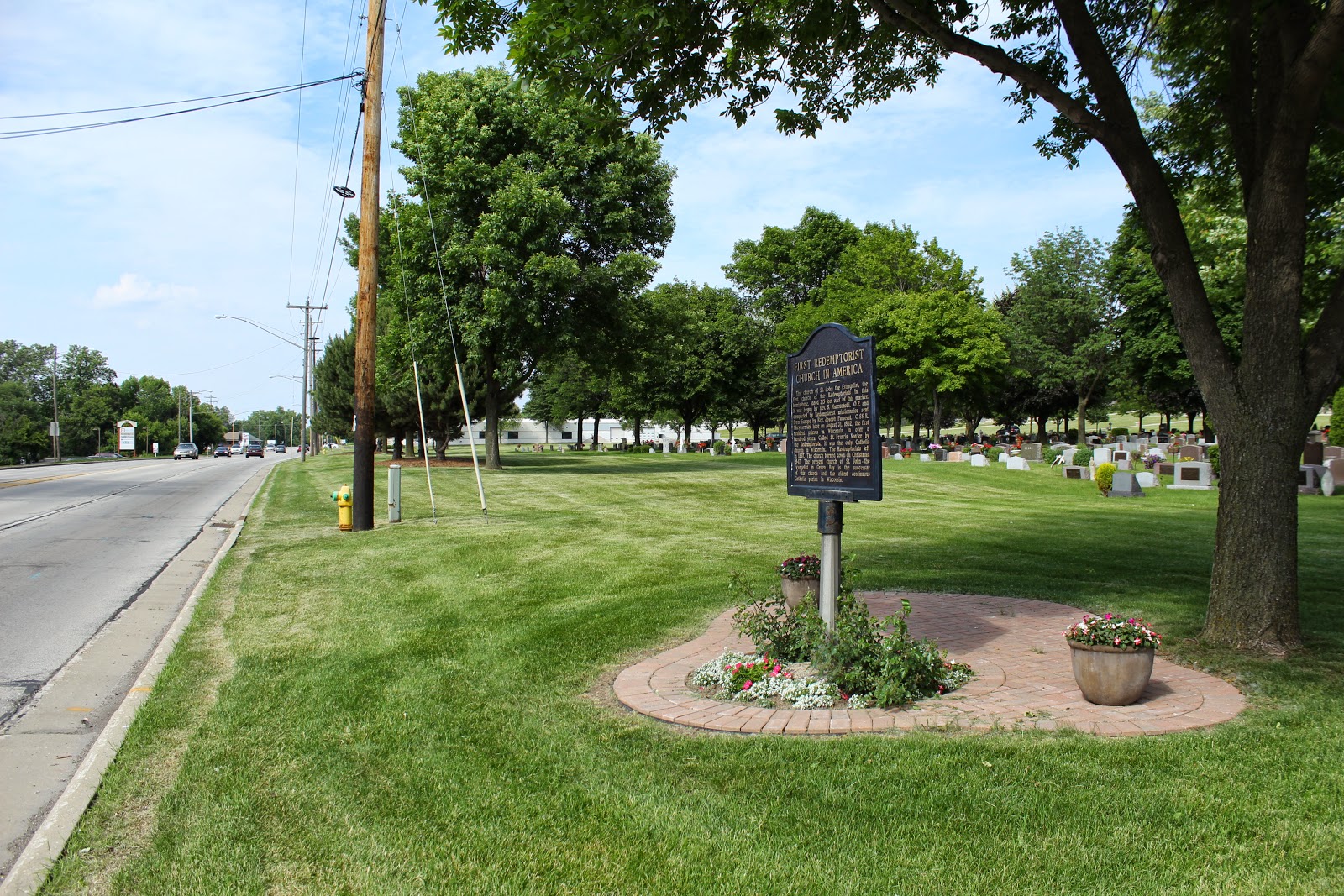 The marker is placed alongside Riverside Drive. 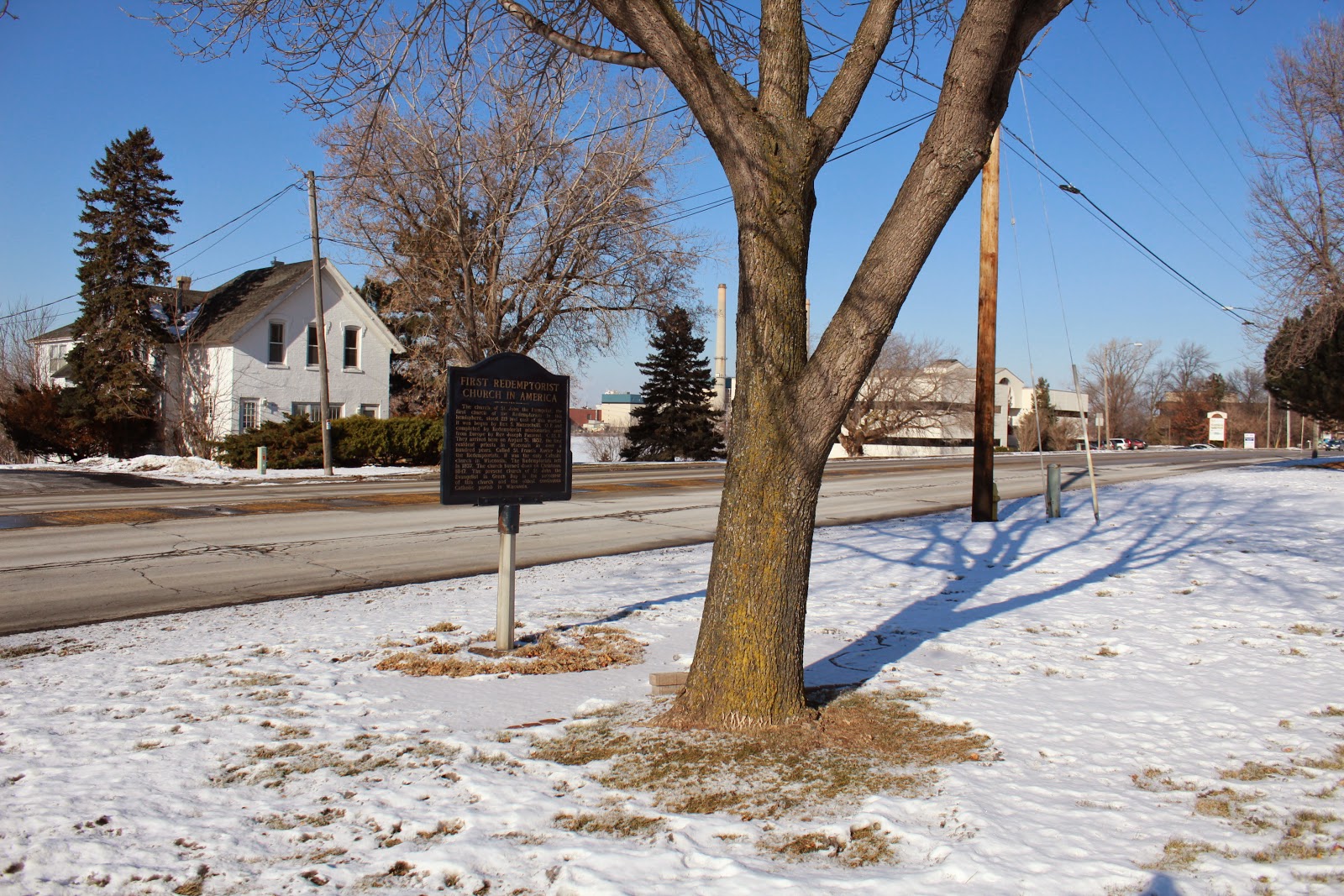 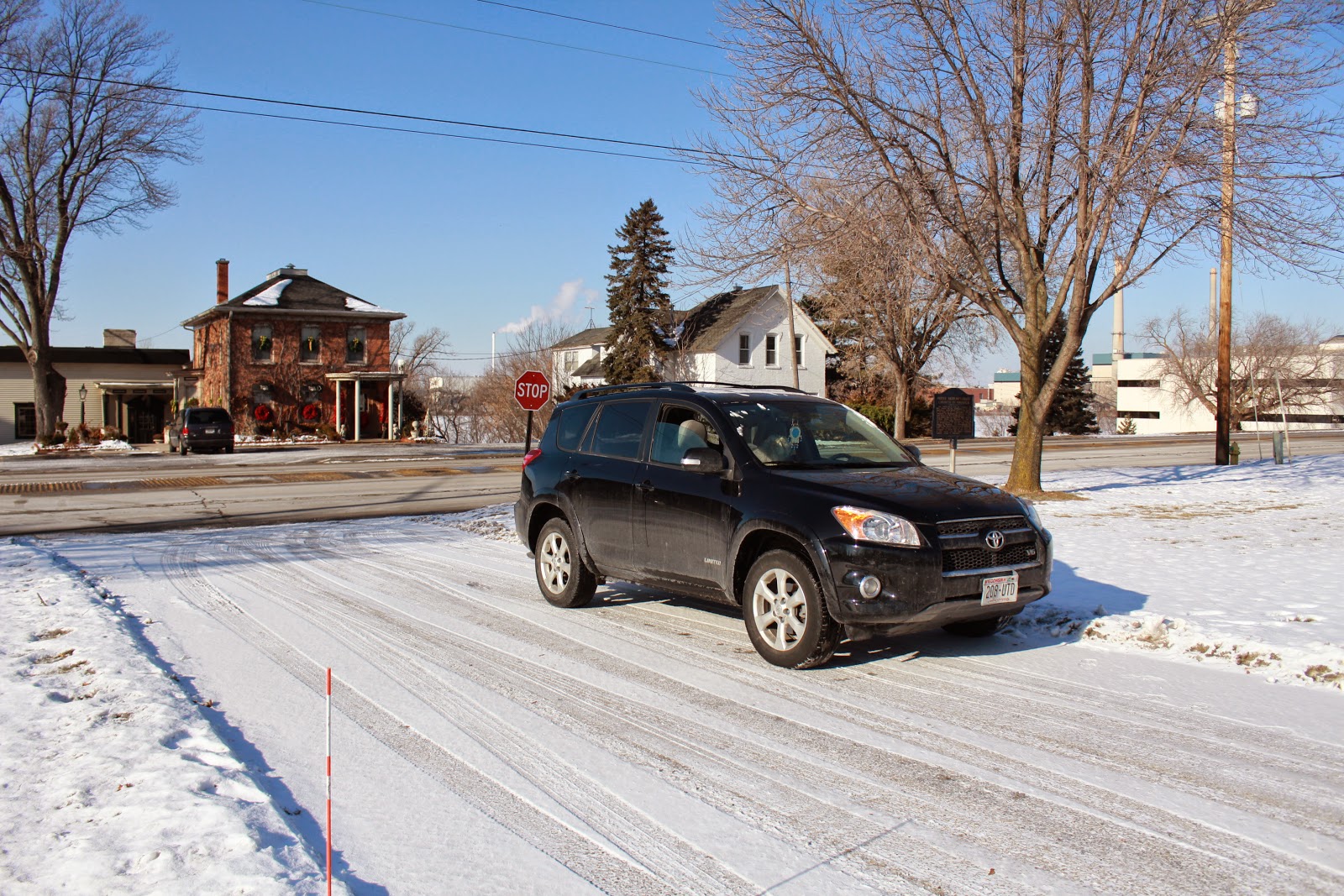 The marker is next to one of many entrances to Allouez Cemetery.
There is no street parking at the marker location;
park in the cemetery road to access the marker
(the marker is visible to the right of my vehicle, between the trees). 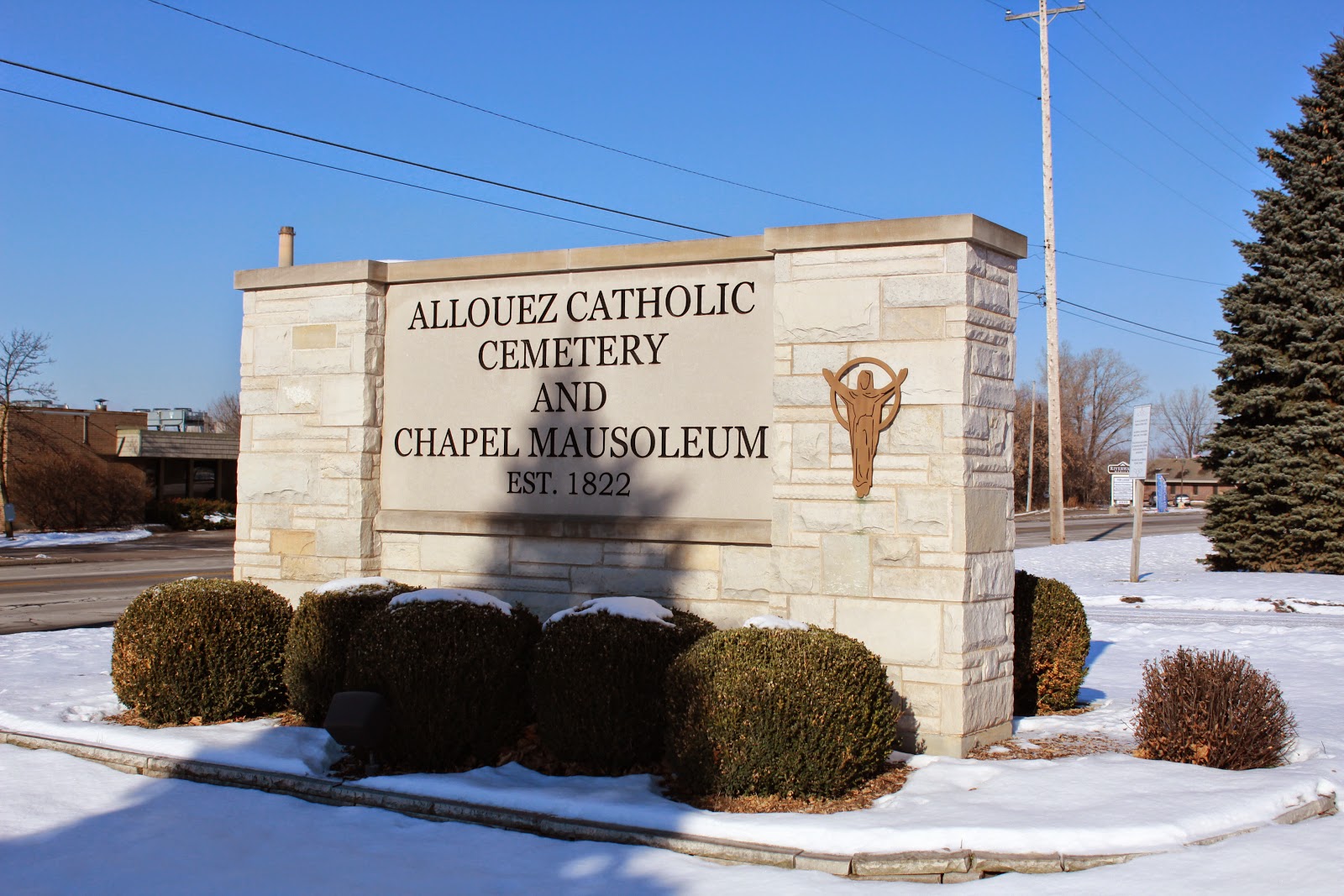 The marker is about a quarter-mile south of this sign,
at the main entrance to Allouez Catholic Cemetery.