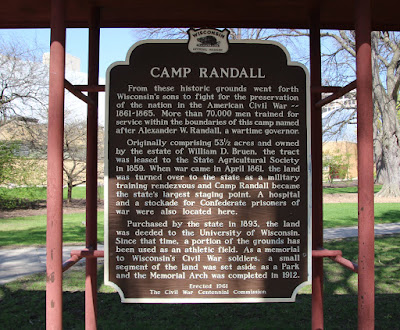 From these historic grounds went forth Wisconsin's sons to fight for the preservation of the nation in the American Civil War -- 1861-1865. More than 70,000 men trained for service within the boundaries of this camp named after Alexander W. Randall, a wartime governor.

Originally comprising 53½ acres and owned by the estate of William D. Bruen, the tract was leased to the State Agricultural Society in 1859. When war came in April 1861, the land was turned over to the state as a military training rendezvous and Camp Randall became the state's largest staging point. A hospital and a stockade for Confederate prisoners of war were also located here.

Purchased by the state in 1893, the land was deeded to the University of Wisconsin. Since that time, a portion of the grounds has been used as an athletic field. As a memorial to Wisconsin's Civil War soldiers, a small segment of the land was set aside as a Park and the Memorial Arch was completed in 1912. 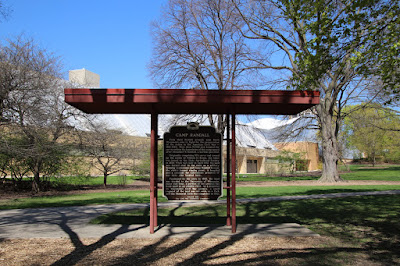 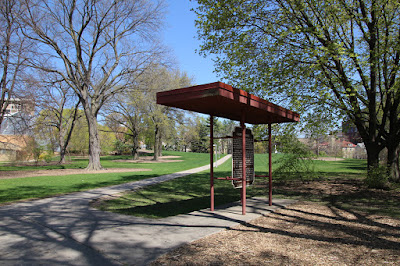 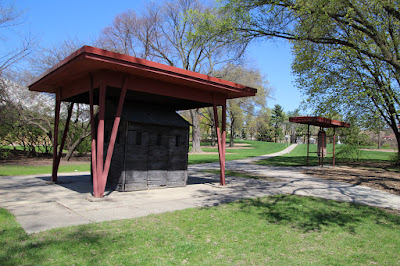 This odd building next to the marker, with no explanation
as to what it is or why it's there . . . 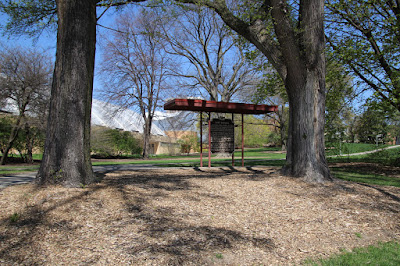 View of the marker from North Randall Avenue.

Camp Randall is part of the UW-Madison campus.

info on the guard house can be found at https://fpm-www3.fpm.wisc.edu/campusplanning/LinkClick.aspx?fileticket=fn0%2FK3YmCG0%3D&tabid=64&mid=542 pages 62-63

Thank you for sharing, Mary! Fabulous link! I've shortened it here, for ease in copying to paste in browser: https://goo.gl/yUoPCu